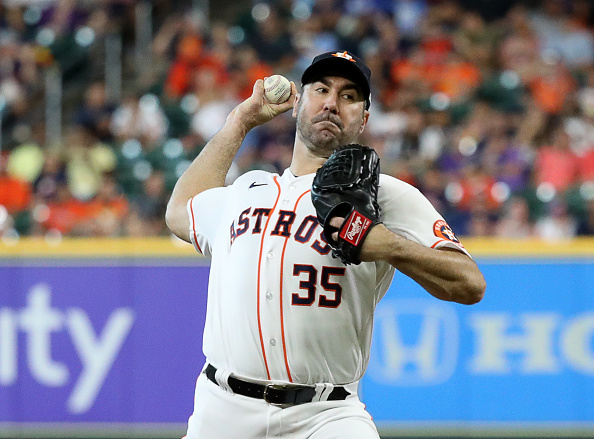 June is winding down and July baseball is quickly approaching. This week, some big name ball players are undervalued in our trade value charts and have slipped down way too much in the rankings due to mini-slumps. Star pitcher Justin Verlander and Red Sox OF J.D. Martinez have both dropped more than three whole points in the MLB Trade Value Charts over the last week. Elsewhere, Wilson Contreras of the Cubs and SP Kyle Wright of the Braves are two more undervalued players worth considering buying low as we head into the Week 12 of the 2022 fantasy baseball season.

Undervalued MLB Players To Target in Trades Heading Into Week 12

Red Sox star JD Martinez is having another great season currently batting .330 on the year. This is tied with his career-high regular season batting average of .330 which he averaged in his first year on the Red Sox in 2018 in which he would help the team win the World Series. However, he’s only recorded one hit and two RBIs in his last four games over a total of 15 ABs. In his mini-slump, Martinez has lost -3.1 points in the Trade Value Charts and is certainly a guy worth scooping up for a a relatively low-value heading into Week 12.

Justin Verlander dropped -3.0 in the MLB trade value charts over the last week. This comes after a terrible performance in his last start where Verlander pitched less than four innings (3.2 IP) for the first time this season. He allowed nine hits and seven runs before getting pulled out of the game. Despite this terrible outing, Verlander has pitched more than 82 innings in 13 games this season for an ERA of 2.30 and 81 strikeouts. Verlander remains one of baseball’s most elite pitchers, and his rough night against the Chicago White Sox on June 18 should not have dropped him below Josh Bell (20.30) and Xander Bogaerts (20.31) in the Trade Value Charts.

Similar to Verlander, Kyle Wright is coming off of a rough game where he allowed 11 hits and five runs in six innings. This game has brought his trade value down a whole -2.0 points over the last week, bringing him below Boston SP Nick Pivetta (16.61) and St. Louis SP Miles Mikolas (17.00). He’s just another starting pitcher to shop low for this week. Besides his last game (June 18th) in which he only produced four FPTS, Wright has recorded at least 21 FPTS in four of the five contests (five games between May 15th and June 12th) which preceded his last start.

The New York Mets’ $341 million man at shortstop is having an underwhelming season in 2022. Now into his second season in New York, Lindor is still batting less than .240 this year after finishing with a .230 BA last season. Nonetheless, he’s still Francisco Lindor and he’s currently valued at 11.44 after hitting a peak trade value of approximately 30 this season.

Wilson Contreras currently leads all National League categories: Homeruns, OBP, SLG, OPS, Hits & Runs. With 12 homers, 27 RBIs, and 40 Runs for a .275 BA, Contreras has become one of the Cubbies’ best offensive players in 2022.