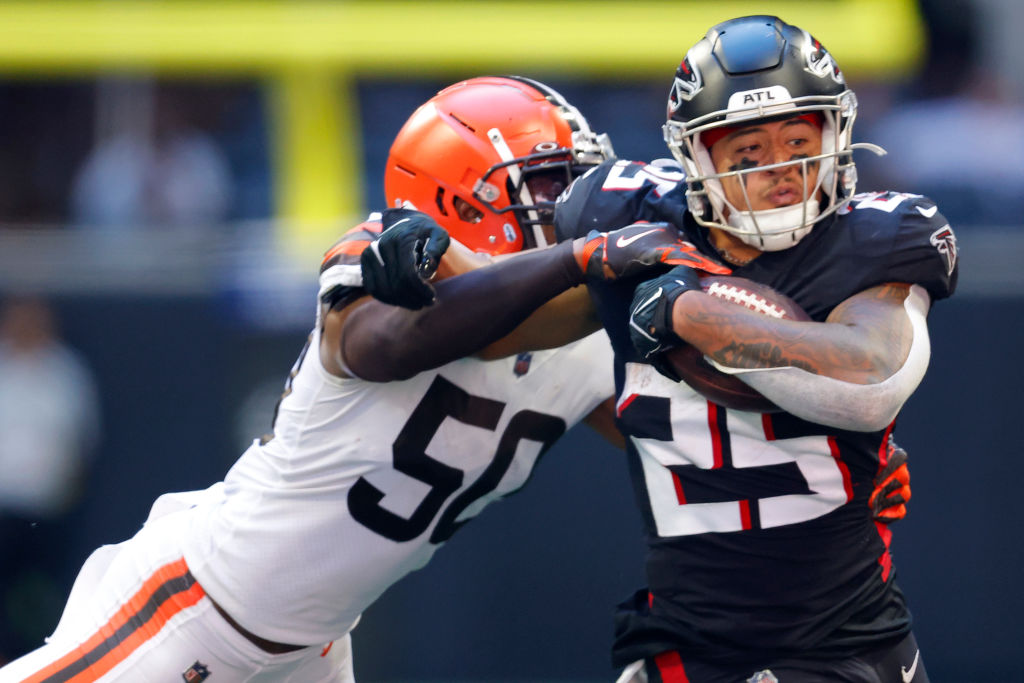 Rookie RB Tyler Allfeier is the top start at the running back position as we gear up for Week 5 of the NFL season.

We did this with quarterbacks yesterday, so let’s keep marching along with running backs today. If you’ve never read this article before, here’s a quick primer. We’re here to dig into the start/sit decisions that are keeping you up at night. Do you bench the RB1 you drafted in the second round but has been struggling in favor of a waiver wire guy? Or do you “start your studs” and ignore the streaming noise you’re seeing on Twitter?

And with that in mind, let’s dig into some Week 5 start/sit recommendations for running backs.

With Cordarrelle Patterson out, Allgeier is a great “do I start an unknown with increased opportunities over the guy I took in the third round but is struggling?” case study. Allgeier isn’t seeing a ton of work in the passing game (just two targets on the season), but he’s carried the ball 10 times in two of his last three games. Coming off a 10-carry, 84-yard game last week, Allgeier should see an uptick in usage this week against the Buccaneers. It’s not a great matchup (and Caleb Huntley will factor in), but Allgeier should see enough carries to be worth starting this week.

Another rookie who has been seeing an uptick in usage, Pacheco is an interesting play this week. He has a nice matchup against the Raiders, and is coming off a game in which he saw a season and career-high 11 carries, which led to 63 rushing yards. Pacheco is still competing with Clyde Edwards-Helaire and Jerrick McKinnon for touches (which makes him risky), but the dearth of good running backs out there makes him a start in deeper leagues this week.

Continuing along the rookie theme this week (this wasn’t by design, I promise!), Rachaad White has been trending upwards as of late. He’s yet to carry the ball more than six times in a game this season, but White saw five targets last week. And with Tom Brady’s career-long love of the passing back, I’m paying attention. Could this pick completely blow up in our face against the Falcons this weekend? Absolutely. However, there’s not much to work with at running back this week and White looks like a worthwhile play in PPR leagues.

Double-dipping here, but I just don’t see how we can feel good about starting either of these guys. Akers only saw eight carries that went for 13 yards last week and Henderson only saw seven carries for 27 yards. Henderson has been getting more usage in the passing game so I think he’s maybe a little safer, but neither of these players has a high ceiling while the other is healthy. I’m not saying you have to sit them for Brandon Bolden or anything like that, but I’d keep both of these guys on your bench this week if you can.

The Travis Etienne hype train seems to have gone off the rails. After a lost rookie season, Etienne hasn’t put up more than 47 rushing yards in a game all season (and that was back in Week 1) and he’s not seeing much usage in the passing game either with a season-high of four targets back in Week 1. Like the two gentlemen above, Etienne isn’t an automatic bench without context. But unless you’re in a deep league, I’d rather roll with someone else this week.

After a strong start to the season, Carter has seen his usage in the Jets offense decline over the past couple of weeks in favor of rookie Breece Hall. Carter isn’t going anywhere as he’s still touching the ball 10-12 times per game, but I don’t think the arrow is pointing up for the second-year player. Like Etienne, I don’t think Carter is an automatic bench. But I’d keep him on your bench if you can afford to.