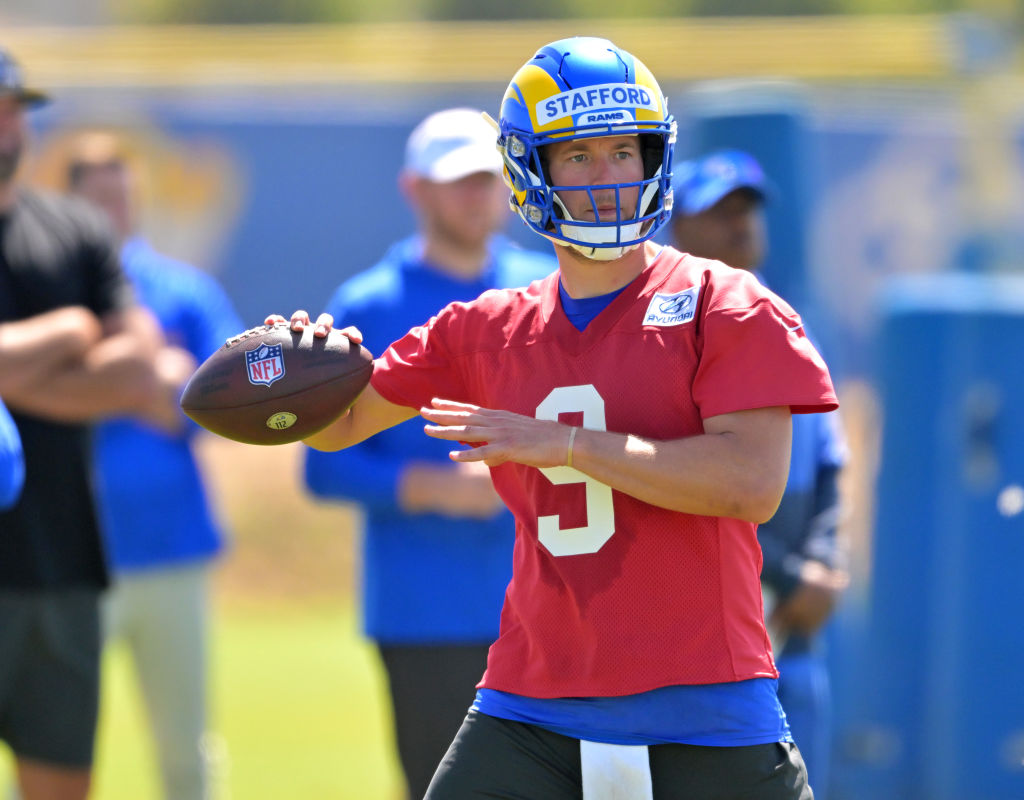 Although some fantasy drafts have already taken place, the majority of leagues wait until August or September to draft. With that in mind, let's take. a look at a moment to focus on one of the most critical positions in fantasy football: quarterback. Based on the current ADP (Average Draft Position), the reigning Super Bowl winner, Matthew Stafford, seems like a massive value pick. Veteran quarterbacks seem like the sexy pick all of a sudden as this year's top quarterbacks to target based on ADP all have several years of experience (excluding Trevor Lawrence).

Russell Wilson is another veteran who is going much later than usual all because he is now in Denver. However, the Broncos have some playmakers at the wide receiver position. Then there is the iconic Tom Brady. Yes, he is getting older but he is an absolute steal as the 12th quarterback off the board. Derek Carr proved last season that he can put up solid stats with a decent supporting cast and now Davante Adams is added to the mix. Finally, we’ll take a look at some late-round quarterbacks such as Jameis Winston and Trevor Lawrence. Now it's time to analyze the most underrated quarterbacks heading into the 2022 fantasy football season based on ADP.

Please Note: These ADPs are based on PPR formats.

QBs To Target | QBs To Avoid

RBs To Target | RBs To Avoid

WRs To Target | WRs To Avoid

TEs To Target | TEs To Avoid

2022 Fantasy Football Quarterbacks To Target Based on ADP

Last season, Matthew Stafford threw for a whopping 41 touchdowns (tied for the most touchdowns Stafford threw since 2011 with the Detroit Lions). Not to mention, he accumulated 4,886 yards through the air. However, since the Rams called so many passing plays, Stafford tossed a league-high 17 interceptions (tied with rookie Trevor Lawrence). Some of those picks were on Stafford’s teammates but a big chunk of was were on some unexpected boneheaded plays. If he learns how to protect the football, the sky's the limit for this guy considering he already won a Super Bowl in his debut season in Los Angeles.

Although the Rams lost Robert Woods to the Titans and Odell Beckham is now a free agent, the Rams’ front office decided to address these holes by signing WR Allen Robinson. Despite A-Rob’s terrible 2021 campaign with Justin Fields under center (36 receptions for 338 receiving yards and one touchdown) in Chicago, Robinson will provide Stafford with yet another serious pass-catcher next season. Don’t forget that A-Rob is just one year removed from 100+ receptions, 1,000+ yards, and nine touchdowns.

Los Angeles also retained WR Van Jefferson who had 50 catches for 802 yards and six touchdowns in 2021. Alongside Robinson and the best wideout in the league in Cooper Kupp, Stafford should have another monster season. Ge’s currently going in the seventh round when he has the skillset to be an early sixth-round pick. Aaron Rodgers and Jalen Hurts are listed ahead of Stafford in terms of Average Draft Position yet I’d select Stafford over the reigning MVP and Hurts any day of the week.

Russell Wilson was traded to the Denver Broncos this offseason. He is joining a team filled with strong young wideouts who will help him maintain his efficiency as he moves to the AFC West. Between Jerry Jeudy, Courtland Sutton, Tim Patrick, and K.J. Hamler, the Broncos already have two young and highly athletic wideouts ready for breakout seasons. This is especially the case for Jeudy, whose injuries last season limited him to just 38 catches for 467 yards. Coming out of Alabama, Jeudy was the No. 15 overall selection in the 2020 draft. Healthy heading into 2022, Jeudy will be ready to have that breakout year so many wide receivers have in their third year at the NFL level. Sutton will also further open the field for Wilson. Sutton had 776 yards and two touchdowns last season despite some lackluster quarterback play. With Wilson throwing the football, expect Sutton to return to 1,000+ yards receiving and at least five touchdowns. Heading into this season, the Broncos have an average offensive line that should give Wilson enough protection to throw the ball without getting sacked excessively. It should make scrambling out of the pocket and rushing the football slightly easier for Wilson in 2022 as opposed to 2021.

Why do people still doubt Tom Brady? He's arguably the greatest quarterback of all time yet he's currently being drafted 12th among quarterbacks and not until the ninth round! Brady is returning to a Tampa Bay roster with wide receivers Chris Godwin and Mike Evans and Cameron Brate at tight end. While Rob Gronkowski announced his retirement from football earlier this offseason, Tampa’s two best wideouts will be back in action ready to catch passes from Brady in 2022. Antonio Brown won't be around but we've seen Brady work his magic with far less talent around him. Don't forget that he has Leonard Fournette and Gio Bernard coming out of the backfield. Brady is going to have another massive season and prove the critics wrong.

Though he is 44 years old heading into 2022, Brady threw for a career-high 5,316 yards last season, completing 67.5% of his passes. He recorded 43 touchdowns compared to a mere 12 picks in his second season with the Buccaneers. Statistically, Brady has improved with age. He had a more efficient season in 2021 than in 2020. The personnel is in place; now it's time for Brady to execute. Fantasy owners should be very happy to land Brady in the seventh or eighth round (depending on league format and scoring).

The Raiders have drastically improved their receiving core this offseason by adding Davante Adams to the mix. He will join Darren Waller and Hunter Renfrow, who both had outstanding 2021 seasons. Those guys helped Derek Carr throw for a career-high 4,804 yards and 23 touchdowns in 2021. With Davante Adams in the equation for the 2022 season, Carr has some of the best offensive weapons in the NFL at his disposal. He could pass for 5,000+ yards and 30+ touchdowns this upcoming season. However, despite his obvious massive upside, Carr is still being drafted far too late. If he falls to the ninth round, do not hesitate to snag him.

After a rough first season in Jacksonville, Trevor Lawrence is heading into his sophomore NFL campaign with a little more help around him. In his rookie campaign, the No. 1 overall pick in the 2021 NFL Draft had a rough season. He passed for 3,641 yards and 12 touchdowns but threw a whopping 17 interceptions. Heading into 2022, the Jacksonville Jaguars have the highest-rated offensive line. When healthy, tackle Jack Conklin and tackle Jedrick Wills Jr. make the Jaguars' offensive line unstoppable. Injuries have been a concern for their linemen last season, which limited snaps for some of their elite tackles had last season. In 2022, a healthy offensive line will be key for Lawrence to throw the ball more vigilantly.

The Jaguars also added a ton of weapons to the roster since they realized Lawrence had no chance last season with all those mediocre skill players around him. Now, Jacksonville has Christian Kirk, Marvin Jones, and Zay Jones as their best three wideouts heading into this season. Though Marvin Jones is a solid wideout who is still growing as a player, Zay Jones has disappointed in his first few NFL seasons. Kirk had a solid season with the Cardinals last season (982 yards and five touchdowns).

In 2019, Travis Etienne finished with 432 receiving yards and four touchdown catches for the Clemson Tigers. In 2020, he recorded 588 yards, averaging 12.3 yards per catch and two touchdowns. Although he is listed as a running back, he can function as a slot receiver as well. His pre-established chemistry with Lawrence makes Etienne uniquely valuable to the Jaguars and their starting quarterback. In situations where Lawrence threw the ball carelessly and in desperation last season, he didn’t have Etienne by his side to shuffle him the ball. This season, he will.  The No. 26 pick in the 2021 NFL Draft did not play in his rookie season due to injury. Fans will finally get to see the Etienne and Lawrence duo back on the field together like at Clemson. While Etienne didn't play a single snap in his rookie season, his numbers at Clemson with Lawrence were phenomenal.

For fantasy owners who are reluctant to draft a quarterback early in the draft, Lawrence heading into his second season is a very interesting option.

Before blowing his knee out seven games into last season, Jameis Winston was performing unbelievably for the New Orleans Saints in their first NFL season without future Hall-of-Famer Drew Brees. Last season, Winston garnered a 5-2 record for the first seven games of the season and maintained an impressive QBR of 64.4 before going down (the second highest QBR of Winston’s NFL career). While his QBR is only based on seven games last season, it shows how well Winston functioned as the Saints starting QB. In Week 1 of the 2021 season, Winston threw for five touchdowns and no interceptions to annihilate the Packers 38-3 on the road. While some concerns can be raised with Sean Payton out in New Orleans for the 2022 season, Winston isn’t expected to be drafted in the first 14 rounds of 2022 drafts. However, he is New Orleans’ starter this season.

The return of Michael Thomas combined with the free-agent signing of Jarvis Landry should open up the field for Winston vastly this season. New Orleans also decided to trade up in the draft to get wide receiver Chris Olave" data-toggle="modal" data-target="#player-pop-up" href="/nfl_player_news/Chris_Olave/">Chris Olave out of Ohio State with the No. 11  pick. Between Olave, Landry, and Thomas, the Saints might have one of the best receiving trios in the NFC. Last season, Winston’s top wideouts were Deontae Harris and Marquez Calloway. The Saints dramatically improved their offense this offseason by providing Winston with a plethora of pass-catchers which should make his job a lot easier in 2022. Even though he tore his ACL seven games into last season, Winston has excelled in his rehabilitation regimen and is poised to have a comeback season for New Orleans this year. He is certainly one of the most underrated quarterbacks heading into the 2022 fantasy football draft season. In our opinion, Jameis Winston is criminally undervalued heading into this season.