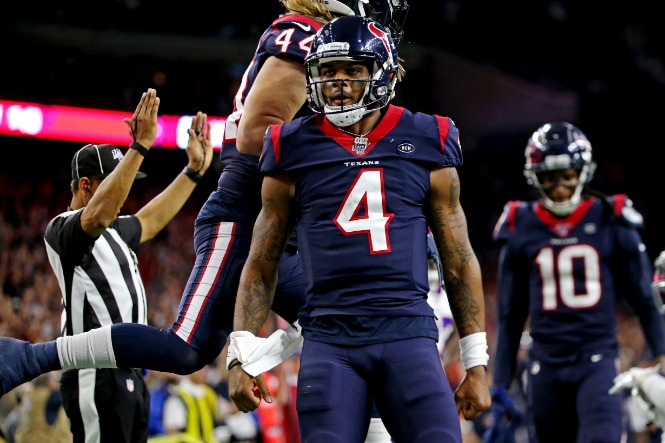 The larger takeaway from this Wild Card weekend, especially on the AFC side, would have to be the word "resiliency." It was a really great weekend for the NFL to start things off this postseason. A lot of it wasn't pretty, it became more and more entertaining and exciting with each contest. On the NFC, it's clear to me that the conference is top heavy with talent. The 49ers and Packers do feel like the clearly better teams. While Minnesota and Seattle, the Wild Card winners, are just the less mediocre beneficiaries of the

Few early tidbits: There were three upsets, at least according to playoff seed (Titans, Vikings and Seahawks). The highest score from any of the games was just 26 pts with six teams scoring 20 pts or less. And finally, one of the ladies from The Bachelor won the Milly Maker over on DraftKings.

It's odd when the narrative fits to the outcome of a game. However, Josh Allen was erratic. When he was on point, he made great throws and kept this team in it. At other times, the game got away from him. It should tell you something just looking at the numbers. Allen threw it 46 times and only completed 24 passes. That 52% completion rate doesn't make sense for a team that wants to work the ground game and lean on its defense. There were throws where Allen was legit just chucking it up there to see what would happen.

On the other sideline, Deshaun Watson definitively etched adjectives like toughness to his name. Talk about a will to win. That third quarter 20 yard scrambling TD from Watson. Lord have mercy! And then to convert that two-point conversion the way he did, laying out and extending the ball with one hand just inside the pylon. Thing of beauty. Watson also took care of the football

For next season, I have to wonder what the Bills are going to do offensively. John Brown had a solid season; however, isn't he more of a WR2? Devin Singletary looks very promising and I think they can get him more involved as a receiver. I've never been a Cole Beasley fan, but I can live with him in the slot if they add another outside pass-catcher.

Houston moves onto the divisional round thanks to their powerful season half and clutch overtime play. I love the Watson and Mahomes battle coming next week. One underrated piece of this Texans' team is Kenny Stills. I love him on those intermediate routes and he can certainly go deep. Another afterthought is the contribution made by Carlos Hyde. Love him in blitz pickup and wearing down opponents' front seven. The Texans are far more than just JJ Watt, Watson and DeAndre Hopkins.

Even though the Chiefs are 9-pt favorites, I still like Houston's chances because of Watson. Shutting down Mahomes, Travis Kelce and Tyreek Hill is more or less impossible but I can see this upcoming divisional game going in a similar fashion as the Texans' win over Buffalo: Houston keeps it close and a clutch play followed by a KC turnover flips the game on its head. FWIW, the Texans beat the Chiefs in Week 6 at Arrowhead, 31-24.

It seemed like everyone's gut was telling them the Pats would lose. There was this lingering "well this is where Tom Brady pulls it off most of the time". Yet it never came. And after every failed drive, it felt like, "Oh, well maybe on the next one".

When the game started and Derrick Henry was netting 4 or more yards on almost every carry, this one felt inevitable. That said, the Titans never really close this game out. The Patriots were always in a position to win. Or at least within a score. Henry finished with 182 yards and a TD. I have to give the MVP nod to Titans' head coach Mike Vrabel. That penalty time runoff with over five minutes to go in the fourth quarter was some textbook gamesmanship. The series of penalties took 1:36 off the clock.

You know I think there are a lot of great talking points with this game: Tom Brady's possible finale, Brett Kern pinning the Patriots deep in their own territory with unreal marksmanship with four punts inside the 20, Derrick Henry's domination, etc. The real MVP here has to be Tennessee's defense. For all those times Brady couldn't seal the deal, the Titans made plays. They didn't have any sacks, but they did have 6.5 tackles for loss. They had seven pass breakups and of course, the pick-six INT that sealed the deal by former Patriots CB Logan Ryan.

Looking ahead, I wish Tom Brady would retire. I think he's lost a bit of his accuracy and ball velocity. Is he still a very good QB? Of course. But this narrative that "HE CAN'T GO OUT LIKE THAT!" It's crazy. You think a linebacker can't retire if on his last play, he misses a tackle. The Pats went to the last three Super Bowls and won two of 'em. He's widely considered to be unrivaled in his greatness across all sports. This deluded American Exceptionalism is for the birds. Let the man ride off into the sunset with his blueberry smoothies and supermodel wife and family.

As for the Titans, the actual winners of the game, they must face the meat grinder that is the Baltimore Ravens. This is an interesting matchup. I think these teams are similar on offense and defense. Both teams want to run the ball to set up the pass. They want to minimize the need for risk-taking. Control the block. Control the line of scrimmage. Tennessee has the edge at RB and maybe OL. I'd give the edge at QB, WR and TE. I think the X-factor here is if Ryan Tannehill can get in a better rhythm. He didn't do much vs New England, although he didn't really need to do much. Getting A.J. Brown and Corey Davis more involved needs to be a big priority in this week's practice.