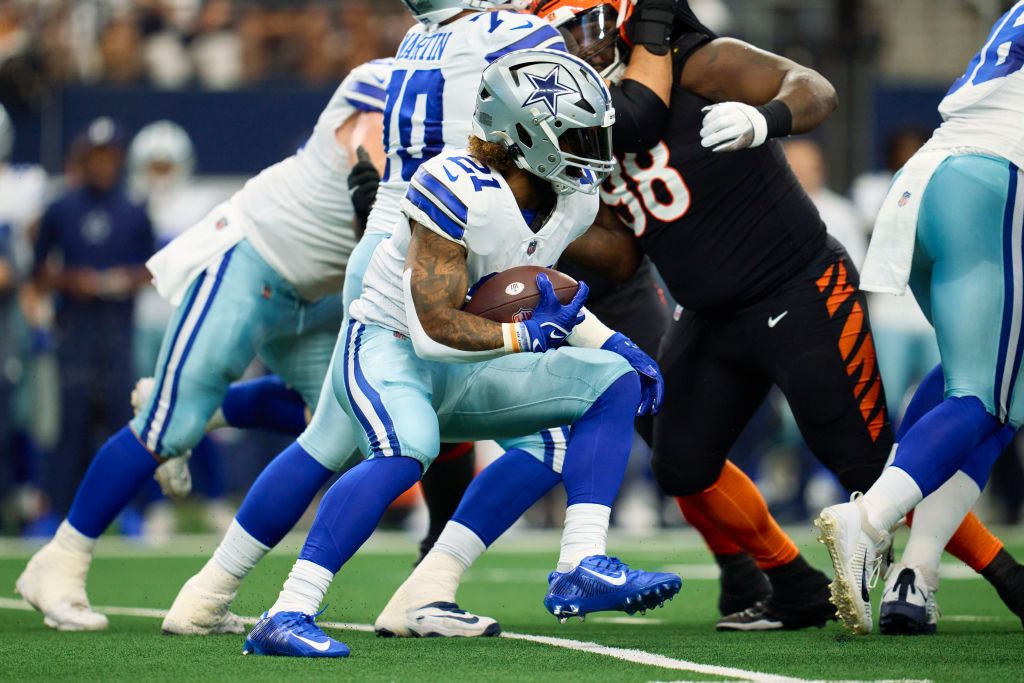 With the Fantasy Assistant Tool, subscribers have the ability to sync their teams from their respective leagues and get some of the best advice and Predictive Analytics to prepare for your upcoming fantasy football week. Today, we are taking a look at Predictive Trade Analytics and specifically the players right now who have the biggest ETI (Expected Trade Interest) across all fantasy football leagues at the moment. Leading the pack is Cardinals breakout WR Greg Dortch who has an ETI of 22% after two strong weeks where he is catching almost everything thrown his way and helping to make up for WR Deandre Hopkins’ absence. Elsewhere, RBs Ezekiel Elliott and Austin Ekeler have ETIs of 16% because of their underwhelming production through the first two weeks of the regular season.

Greg Dortch has been one of the biggest fantasy football surprises this season. Despite being undrafted in most leagues, he is now one of the hottest fantasy wide receivers people are gunning for and that’s because he’s really stepped up as a route-runner for Kyler Murray in Deandre Hopkins’ absence. Dortch caught seven-of-nine targets in Week 1 for 63 yards. Dortch followed that up by catching all four targets thrown his way for 55 yards and a touchdown in this Sunday’s thriller 29-23 OT comeback victory over the raiders. The 5’7’’ former speedster out of Wake Forest University is 11-of-13 this season for an 84.6 Catch%. He is proving himself to be an increasingly reliable target for Murray who was in need of another top-option without Hopkins. At least until Week 7 when Hopkins will be done serving his suspension, Dortch should continue to see some solid yardage. His short frame, quick feet, and playing style are reminiscent of former WR Darren Sprowles who became a very hot fantasy WR when he was still active.

In Week 1, Robbie Anderson blew up for the Panthers while DJ Moore finished the game with just three receptions for 43 yards. In Week 2, he had an identical 43 yards and a touchdown. While his Week 2 fantasy performance was much better than in Week 1, Moore is producing less yardage than most would have expected from him through the first two weeks of the regular season. While Baker Mayfield is without a doubt an upgrade at QB for the Panthers this season in comparison to last, Moore might need more time to establish the chemistry he needs to pump out the fantasy numbers people were expecting from him when they drafted him within the first few rounds.

Through the first two weeks of the season, Henderson has accumulated 51 more yards from scrimmage and a touchdown more than Akers who was drafted well ahead of Henderson and was expected to be Los Angeles’ RB1 without a doubt. Heading into Week 3, things are increasingly looking like Henderson and not Akers will be doing the most of the work at running back. While it may be a bit early to give up on Cam Akers, the high level of interest in trading for Darrell Henderson is understandable.

While Deebo Samuel had a quiet (for him) Week 1 where he caught two passes for 14 yards and had another 52 yards rushing, he caught 30 more yards in Week 2. Still, Deebo has not gotten into the end zone yet this season. Now that Trey Lance has broken his ankle and will miss the remainder of the regular season, QB Jimmy Garoppolo will start in his place for the rest of 2022. This means that Samuel will be running routes from the QB who helped him achieve super-stardom. In 2021, Deebo Samuel finished the season with 1,405 receiving yards averaging a whopping 18.2 yards per catch, 365 rushing yards, and 14 total touchdowns. The vast majority of his passes in 2021 came from Jimmy G. If the two are back on the field together, who knows what they could achieve. Despite entering Sunday’s game mid-way through, Garropolo led the 49ers to a victory with 154 passing yards and a touchdown for a rating of 100.1. In his upcoming first start in Week 3, expect him to erupt and connect with Deebo Samuel for a lot more than what Samuel has put up in the first two weeks of 2022.

Heading into 2022, it was our opinion at fantasysp that Ezekiel Elliot’s numbers over the last three or four years have shown a general decline in his efficiency running the football. So far, Zeke has produced 105 yards rushing (4.2 AVG) and has not gotten into the end zone. In contrast, Cowboys’ RB2 Tony Pollard had a huge Week 2 where he produced 43 rushing yards and a touchdown on nine attempts in addition to four receptions for another 55 yards (13.75 Y/R). Last season, Pollard was much more efficient rushing the football and producing yards per carry than Elliott. So far in 2022, the story is the same. Especially in Week 2, Pollard demonstrated once more that he can do more per rushing attempt than Zeke. Fantasy football owners right now are seeing what they can do to trade Elliott away. He is also a solid buy-low fantasy trade target as a result of his mediocre production through the first two weeks of the regular season.

As expected, Adam Thielen is seeing his numbers decline in comparison to the pro-bowl numbers he was producing a couple of seasons ago. This is because WR Justin Jefferson is performing spectacularly through the first two weeks of the regular season and is now without a question Kirk Cousins’ top route-runner in 2022. Jefferson earned the title of WR1 last season when he began out producing Adam Thielen. While Jefferson was shut down by Darius Slay and the Eagles’ defense in Week 2, he had a whopping 184 yards for two touchdowns in Week 1 against the Packers. While Jefferson has a total of 232 receiving yards and two touchdowns, Thielen has only caught seven passes for 88 yards and no touchdowns through the first two weeks of the regular season. While it was expected that Thielen would produce less than Jefferson throughout 2022, fantasy owners who selected Thielen fairly high in the draft are certainly concerned that he’s produced less than 90 receiving yards so far this season.

Joe Burrow has been off to a very disappointing start this season after being one of the top quarterbacks drafted in 2022 fantasy football leagues. In Week 1, Burrow had a single-game career-high four interceptions and two fumbles (one resulting in a loss and turnover). Burrow therefore turned the ball over five times in Week 1 as the Bengals went on to lose in overtime to the rival Pittsburgh Steelers. In Week 2, the Bengals lost a close game to Cooper Rush and the Cowboys. While Burrow threw no picks in the game, he finished with just 199 yards and a touchdown. Dallas’ secondary did a good job to Prevent Cincinnati from being effective in the passing game. Through the first two games of 2022, Burrow has 537 passing yards for three touchdowns and four interceptions for a disappointing rating of 73.1.

Last season, Burrow completed 70.4% of his passes for 4,611 yards, 34 touchdowns, and 14 interceptions for a rating of 108.3. The Bengals and Joe Burrow will play better in the weeks to come, but are undeniably off to a rocky start this season. As a result of Burrow’s lackluster performance through the first two weeks of the season, some fantasy owners are hitting the panic button and looking to trade Burrow away. In turn, smart fantasy owners looking for a cheaper upgrade at QB could be looking for an opportunity to propose a trade attempt to acquire Burrow for much less than he’s worth. For those reasons, he’s the fantasy football QB with the most trade interest heading into Week 3.