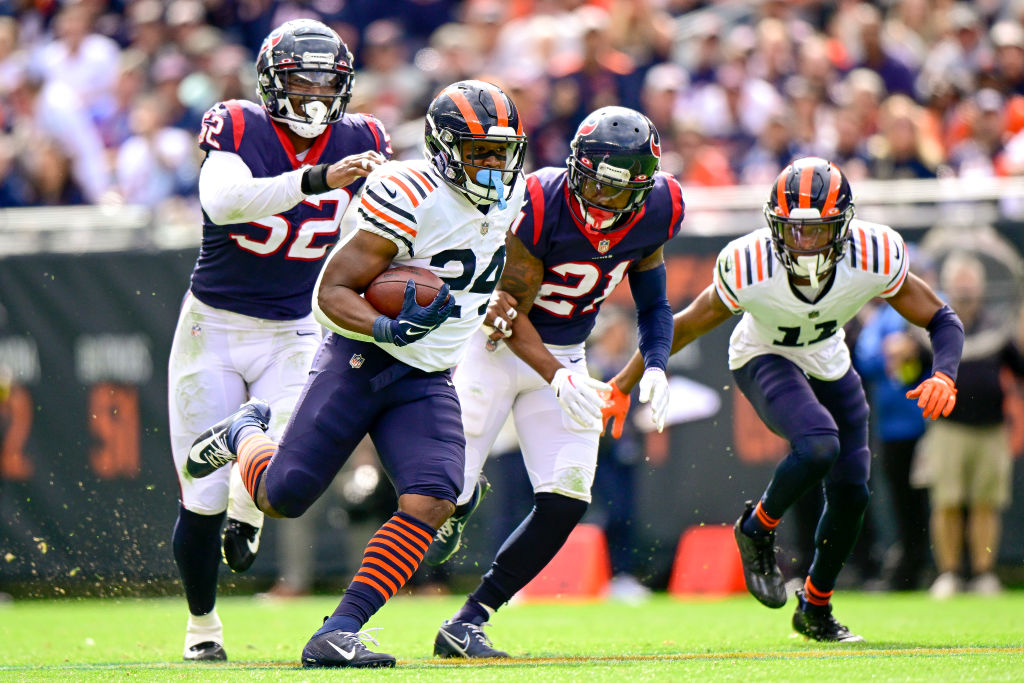 Khalil Herbert is the hottest waiver wire pickup heading into Week 4 after totaling 157 rushing yards and two touchdowns on 20 carries in Chicago’s 23-20 victory over the Houston Texans.

There are a pair of handcuff running backs who are must-adds as we gear up for Week 4-- Khalil Herbert and Alexander Mattison. David Montgomery could be out for a couple of weeks and Dalvin Cook dislocated his shoulder this weekend. Elsewhere, backup running back Samaje Perine of the Bengals could be seeing increased production over the next few weeks. Joe Mixon has struggled running the football and is averaging 2.8 yards per carry this season.

Green Bay’s rookie wide receiver Romeo Doubs had a big game on Sunday. This could be a sign of things to come for Doubs and the Packers as Sammy Watkins was placed on the Injured Reserve ahead of Sunday and Christian Watson was ruled out. Finally, DeVante Parker of the Patriots and Mack Hollins of the Raiders both had massive games on Sunday. Both Parker and Hollins are widely available on the waiver wire heading into Week 4 after producing 140+ yards each for their respective teams. Parker and Hollins could earn more targets in the weeks to come as a result.

Let’s take a look at the best free-agent running backs and wide receivers available on the waiver wire as we wrap up Week 3 and gear up for Week 4 of the fantasy football season.

David Montgomery left Sunday’s game with an ankle and a knee injury and is currently listed as day-to-day heading into Week 4. As the RB2 for the Bears, Khalil Herbert did well this season when Montgomery was on the field. In Week 1, Herbert had nine carries for 45 yards and one touchdown. He followed that up with four carries for 38 yards in Week 2 (9.50 AVG). In Week 3, Montgomery left the contest which gave Herbert the role of RB1 for the remainder of the contest. He had 20 carries for 157 yards (7.85 AVG), two catches for 12 yards, and two rushing touchdowns. Last season, Herbert started in place of Montgomery in four games and did very well.

After Sunday’s outstanding performance, fantasy owners should be flocking to the waiver wire and submitting a claim immediately. Even if Montgomery plays in Week 4, a combination of relatively minor injuries to his ankle and knee could make him limited. If Montgomery doesn’t play on Sunday, then starting Herbert is a no-brainer in Week 4. He is the most valuable free agent to pick up heading into Week 4. Herbert has standalone value when Montgomery is healthy and is a volume-based top-20 running back when Montgomery is sidelined. Chances are that Herbert will be called upon again either in Week 4 or beyond. He does not belong on the waiver wire this deep into the season.

Dalvin Cook suffered a dislocated shoulder in Week 3 but is expected to play in Week 4. Still, Mattison is one of the most valuable handcuffs in all of fantasy football and if he’s available on your league’s waiver wire, it’s time to scoop him up. In Week 3, Mattison saw seven carries and turned that into 28 rushing yards and a touchdown while also adding a reception for an additional 16 yards in Minnesota’s Week 3 victory over the Detroit Lions.

Mattison’s touchdown was a sweet little six-yard scamper in which he broke three tackles to reach the goal line. However, the only reason he found the end zone was because Dalvin Cook injured his shoulder fumbling the ball in the second half. Had Cook been on the field, Mattison probably wouldn’t have scored. But that’s the beauty of owning one of the most valuable handcuffs in fantasy football. Any time that Cook is expected to miss time, Mattison slots in a volume-based RB1.

Cincinnati’s backup running back had a huge game on Sunday. Samaje Perine had nine carries for 47 yards and two receptions for 14 yards and a touchdown reception. While Perine only produced six yards on two combined carries in Week 1 and Week 2, his performance on Sunday should push people to target him on the waiver wire. After all, he’s much more valuable as a pass-catcher out of the backfield than an in-between-the-tackles type of runner.

It also helps Perine’s cause that Joe Mixon struggled against the Jets on Sunday. Mixon had 12 carries for 24 yards (2.0 AVG). This season, Mixon has had 58 carries for 163 yards (2.8 AVG). While he’s also caught 13 passes for 103 yards this season, his efficiency running the ball is coming into question. In turn, the Bengals gave Perine a significant number of touches on Sunday and he made the most out of those opportunities. There is a chance Perine sees more rushing attempts moving forward this season as Mixon continues to struggle to run the ball efficiently. Perine is available as a free agent in more than 90% of leagues at the moment. Perine surely isn’t a league winner but there was tons of hype surrounding him a few years back and perhaps that hype is finally coming to fruition in 2022.

The Green Bay Packers placed Sammy Watkins on Injured Reserve heading into this past Sunday’s game. This will open up opportunities for rookie wide receiver Romeo Doubs moving forward. After combining for six catches and 64 passing yards through the first two weeks of the season, Doubs caught eight passes for 73 yards and a touchdown in Green Bay’s 14-12 road win over Tom Brady and the Buccaneers. Doubs registered a team-high eight receptions and caught every single target Aaron Rodgers threw to him. The rookie is becoming Rodgers’ most trusted receiver, perhaps only behind Allen Lazard. So long as Watkins and fellow rookie Christian Watson remain sidelined, Doubs should continue to see an uptick in snaps, targets, and production. Go snag this guy right now!

After only one catch for nine yards In Week 1, and no targets in Week 2, DeVante Parker exploded in Week 3. Parker had five catches for 156 yards! That means he averaged a ridiculous 31.2 yards per catch! Those are eye-popping numbers. Notably, his longest catch of the day was a 40-yard reception, meaning that Parker pumped out big yards on every catch against the Ravens on Sunday.

There are some concerns about Mac Jones who sustained a high-ankle sprain on Sunday. This could mean that the Patriots turn to their backup in Brian Hoyer for the next few weeks. This is absolutely a situation to monitor. If Jones is good to go, Parker seems poised to continue to draw a ton of targets, especially in the wake of Jakobi Meyers’ injury. Nonetheless, even with Hoyer under center, Parker should be the team’s WR1 after that special outing in Week 3.

Hollins likely isn’t on a whole lot of fantasy squads but perhaps he should be after his explosive outing yesterday in the Raiders’ loss to the Tennessee Titans. Hollins erupted for 158 receiving yards and a touchdown, pacing the team in yardage for the second consecutive week. Hollins' 158 yards are the most by a player drafted by the Eagles in the 4th round or later in 29 years since Calvin Williams had 181 at Washington in 1993.

To be fair, it’s hard to envision Hollins keeping this pace up with Davante Adams, Hunter Renfrow, and Darren Waller demanding a ton of attention on offense. But their presence actually opens up a lot of one-on-one opportunities for the big veteran receiver. It’s worth noting that Hunter Renfrow was not active in Week 3 but Hollins still delivered 22 PPR fantasy points to his owners. That’s not going to happen every week but he seems to have established a special rapport with quarterback Derek Carr. If you have extra space on your roster, Hollins is worth taking a chance on.