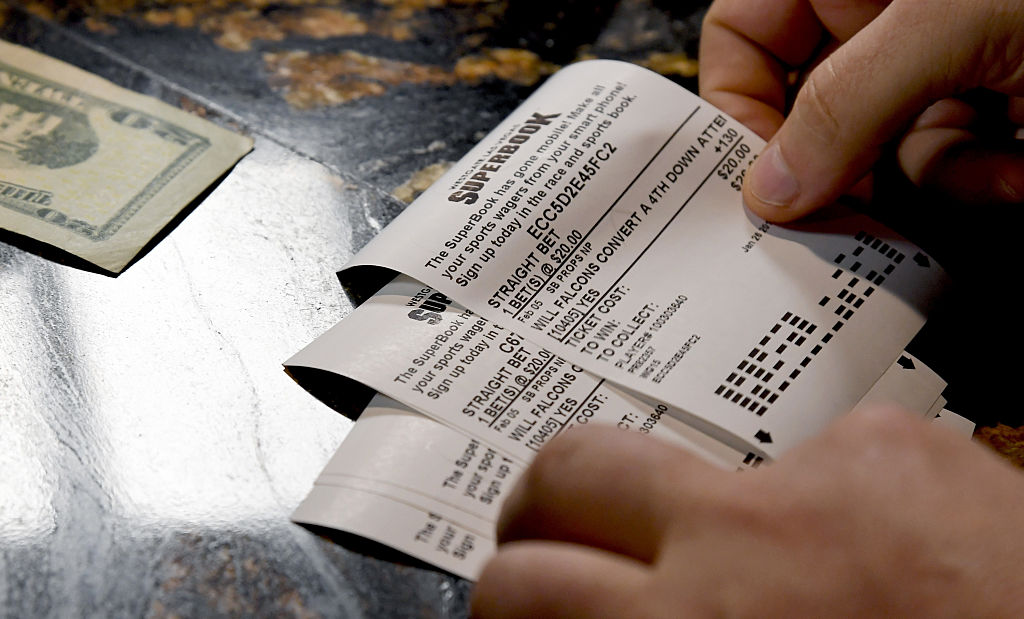 We’ve covered a ton of popular bet offerings from various sportsbooks but Round Robin bets are my new favorite wager type. The worst feeling in the world is getting five-of-six legs correct in a parlay and losing everything. With Round Robins, you would profit if you got five of the six bets correct, though the payout isn’t as great as getting all six correct. Conversely, if you do a five-leg Round Robin and only get three right, you won’t lose your entire stake. Depending on the odds, you will only lose a little bit or perhaps even break even if your underdog picks pan out.

How Round Robins Work

A Round Robin is an easy way to place multiple parlays at once while providing some insurance. When you place a Round Robin bet, you are placing individual bets on every possible parlay combination of the bets you choose. As mentioned above, you do not have to win all legs or all parlays to be profitable.

Just about every sportsbook has Round Robin offerings. To place one of these special wagers that many don’t know about, simply add at least three wagers to your bet slip and go to the Round Robin tab on your sportsbook. Here, you will set the bets broken down in various ways depending on the sportsbook. At FanDuel, you’ll see the bets broken down by twos, threes, and more if you wager more legs. These indicate the number of selections in each parlay involved in the Round Robin.

Here is an example from FanDuel Sportsbook. 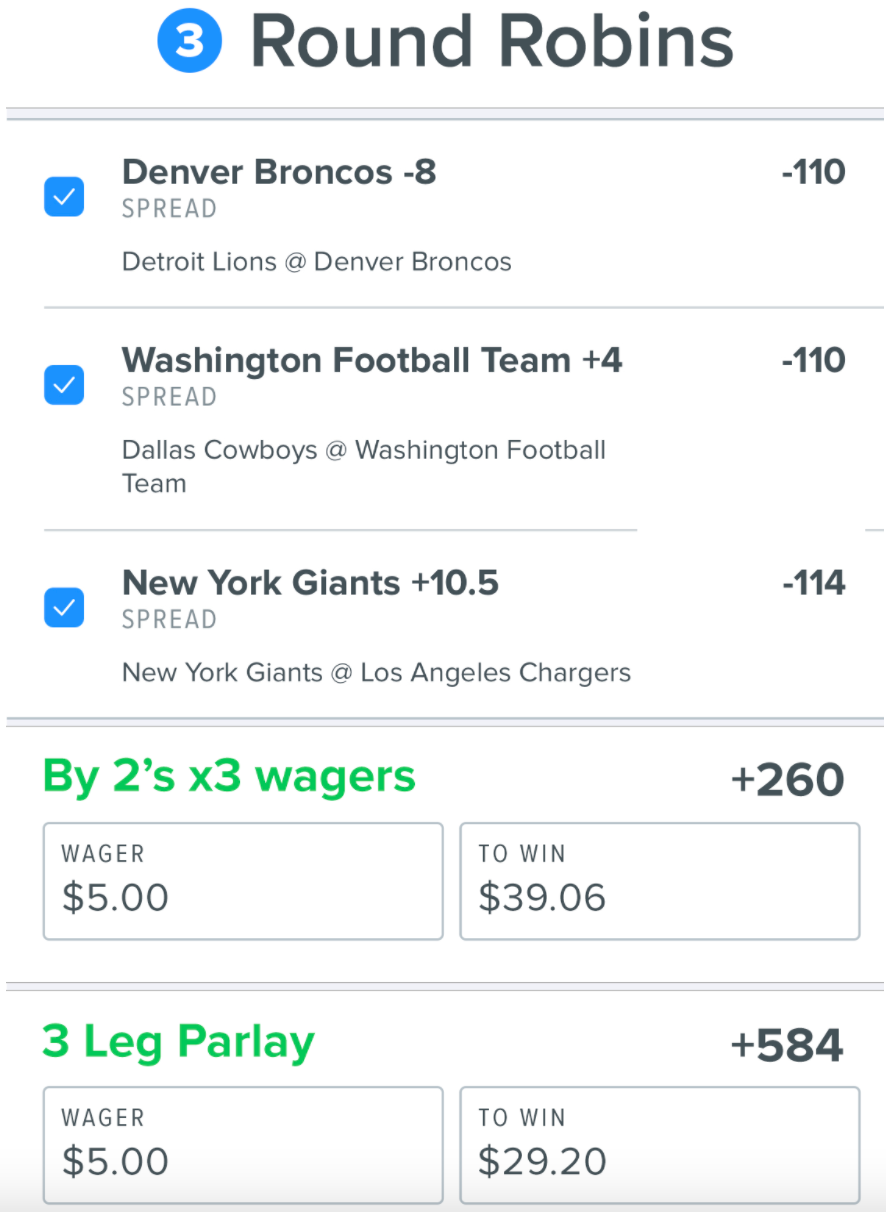 Say you like these three games on an NFL Sunday:

In this scenario, let’s say you decide to risk $10 on each parlay combo. This means you would be wagering $30 total for a potential payout of $78.That’s a nice profit of over $50.

Some sportsbooks will list Round Robin options with nicknames, which are borrowed from horse racing. BetMGM is one sportsbook that does this.

A Trixie is four total bets:

A Patent is the same thing as a Trixie, but you also get your three bets as single wagers. A Patent is listed with “7x” next to it because it’s seven total bets.

There are a lot more options though when it comes to Round Robins. The more games you pick, the more parlay combinations you can create — thousands if you pick enough teams.

ff you pick five teams, you can create:

There’s an endless number of Round Robins you can create when you keep adding teams. An 11-team Round Robin has 2,036 parlay combinations.

Some sportsbooks will give you the option to make a…

Check out an example of a Yankee below: 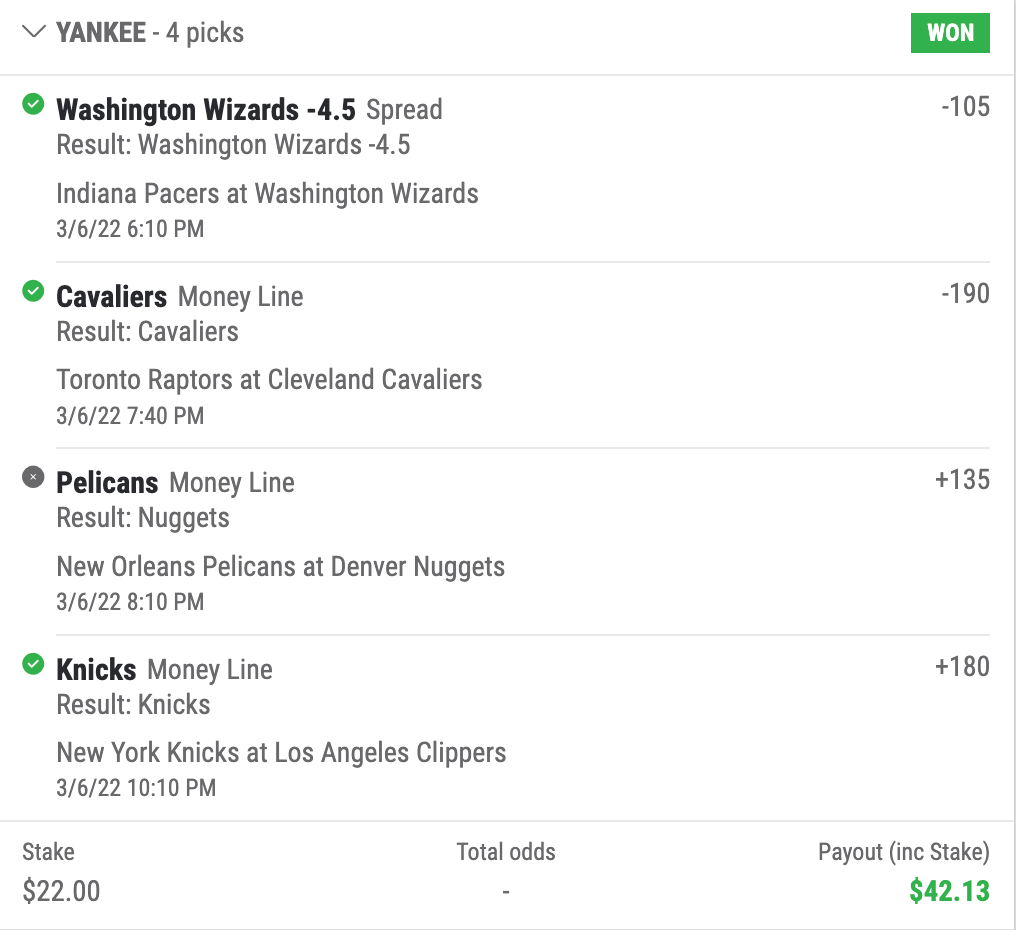 Even though I only got three of four picks correct, of the 11 bets in a Yankee (six doubles, four triples, and one four-leg parlay), I still profited. That's the beauty of Round Robins.

The 11 bets of a Yankee cover your four selections as follows:

Click here to check out a Yankee sports betting calculator.

So what do all of these mean? The more legs to your Round Robin bet, the more bets you can make. When you select five games for a Round Robin, you can make 26 different parlays – 10 two-teamers, 10 three-teamers, five four-teamers, and one five-teamer. That’s a Canadian. Users can opt to add five additional single bets on each leg of the parlay. This is what turns a Candian into a Lucky 31.

If you select six teams in your Round Robin bet, you have 57 parlay options. This is an example of a Heinz. And just like Canadians, users can add single bets to all the parlays. So a Trixie can turn into a Patent. A Canadian can become a Lucky 31. And a Heinz can become a Lucky 63.

Below are recent examples of Canadian bets I’ve made. Those are my favorite because there is a massive upside and if you know what you are doing, the risk is pretty low, much lower than traditional parlays. 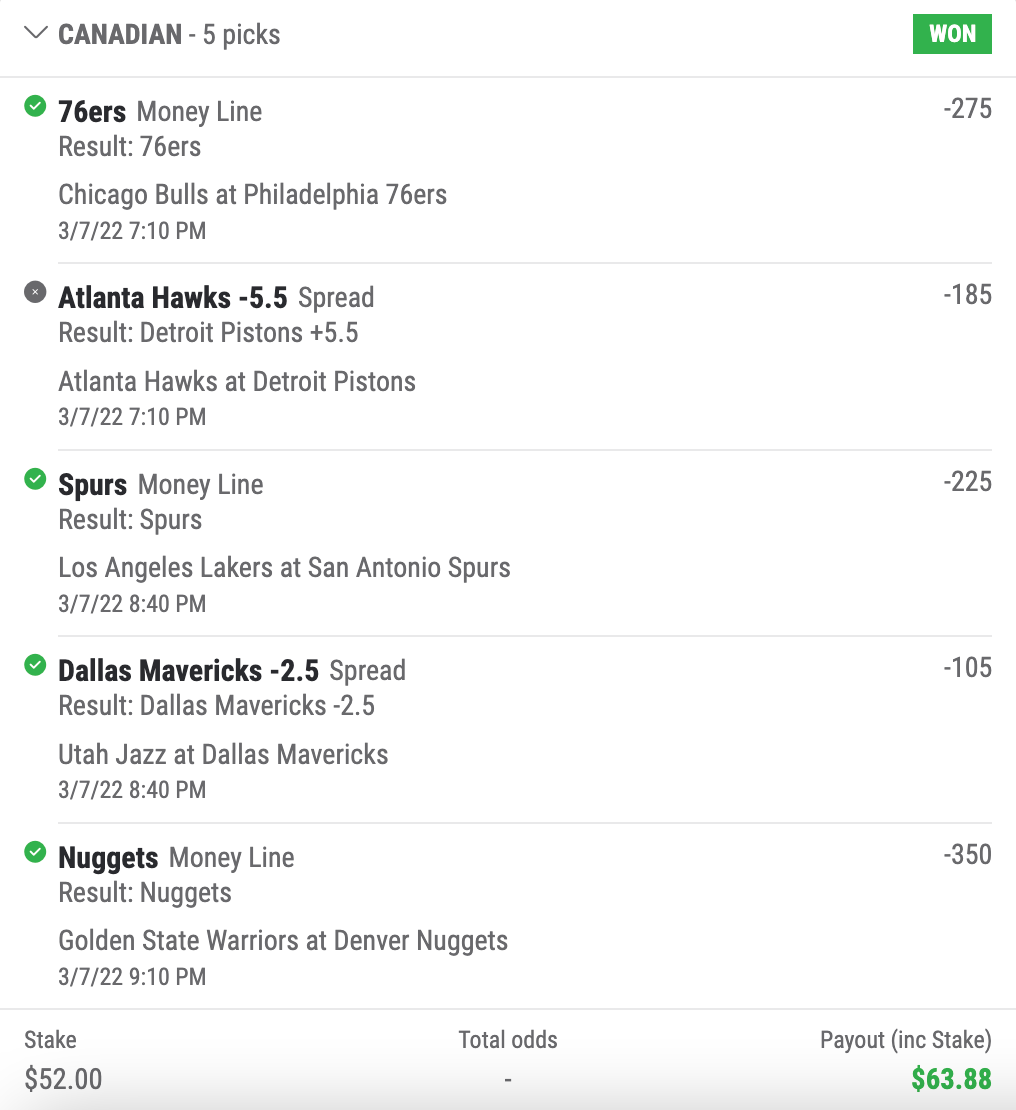 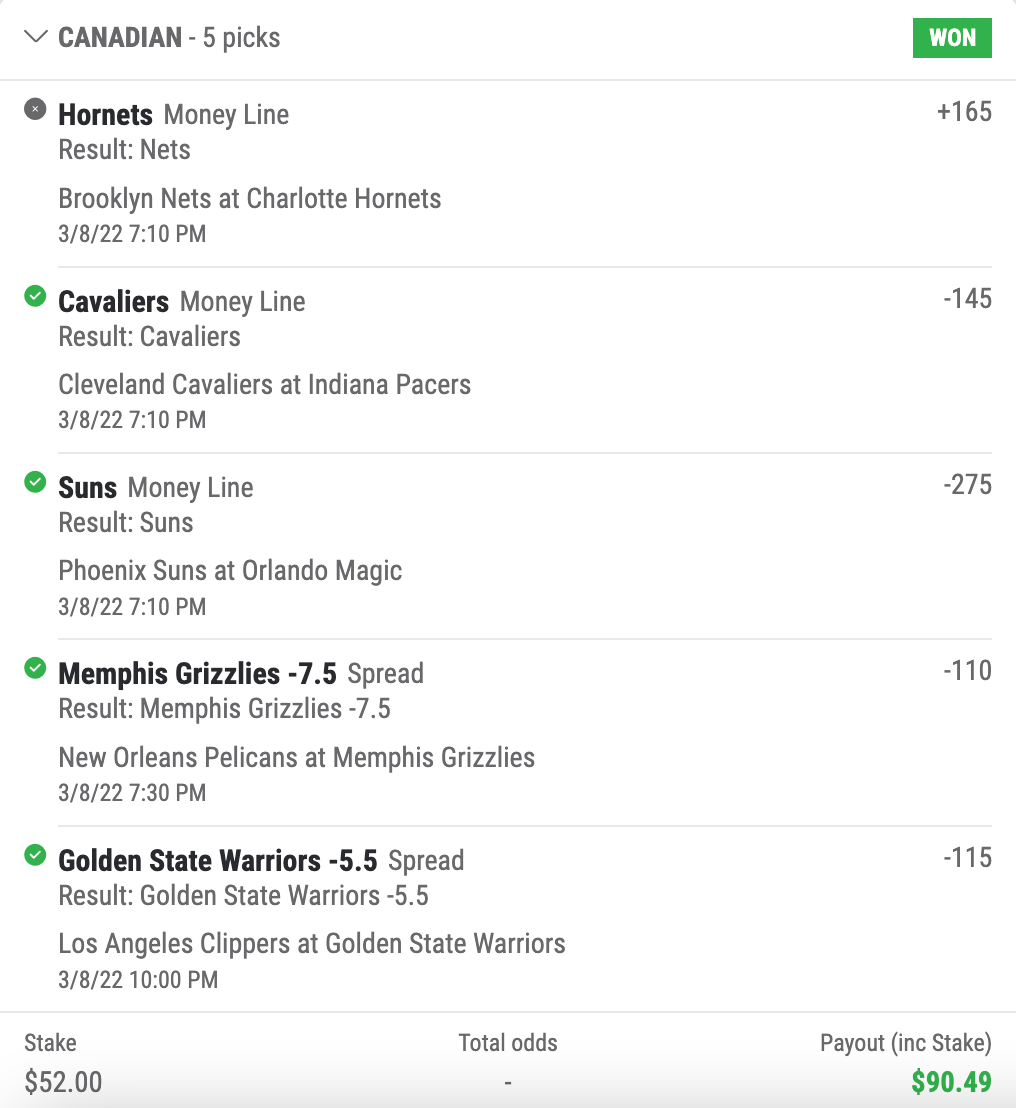 As you can see, even though I didn’t hit all five legs of my Canadian bets, since I went four of five on each of the above examples, I profited. In both scenarios above, I only bet $2 per parlay (26) for a total of a $52 stake. The more longshot odds you include, the potential payout increases. That’s why the second Round Robin was more profitable; the bets were less chalky. No bets with -350 odds like in the first Canadian Round Robin I wagered.

Even though I only predicted three of the five picks right in this Canadian, I didn’t lose it all. Round Robins are like parlays with some insurance. And everyone loves parlays but it's hard to incrementally win wagering only parlays. Round Robins make winning a little bit each day much more possible. 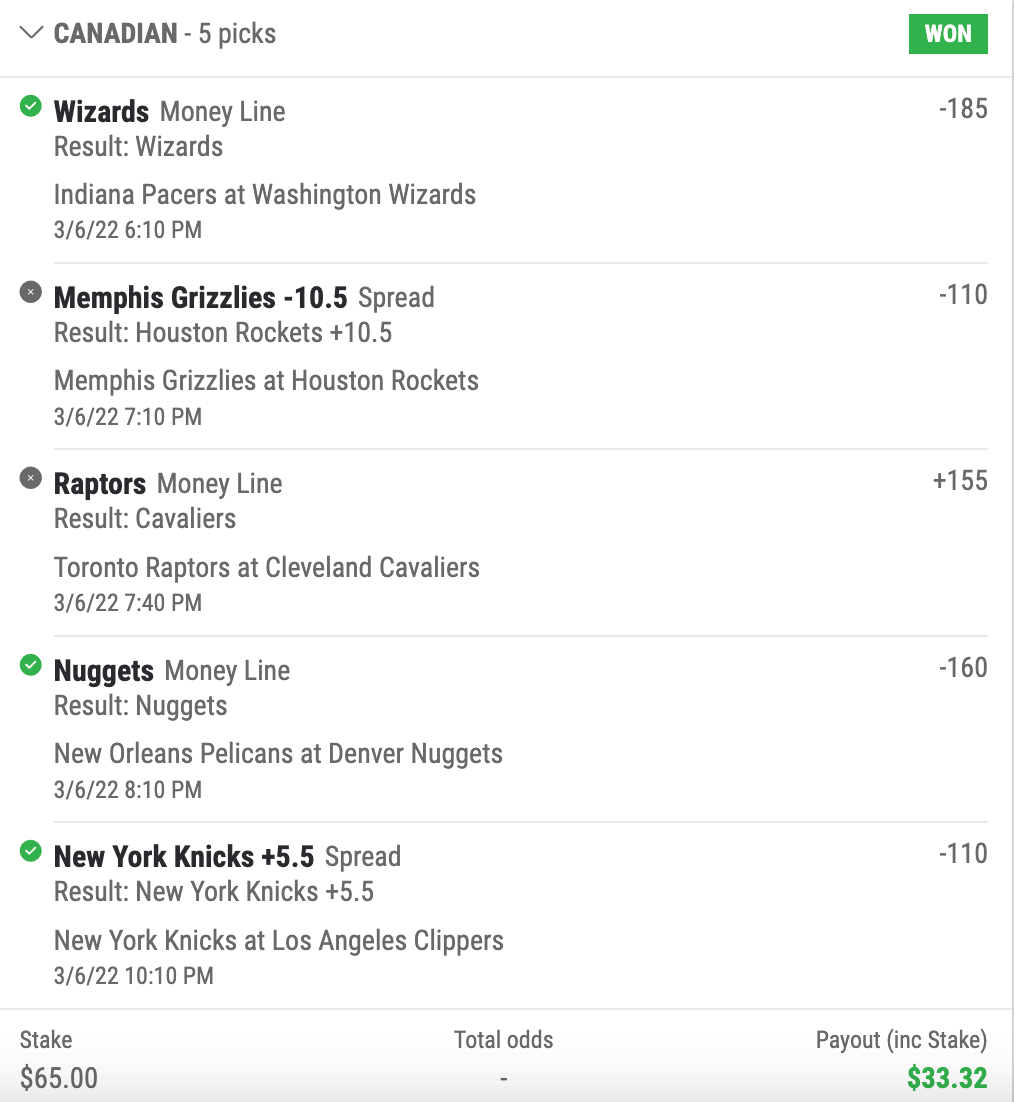 Lastly, the same scenario explains seven-leg Round Robin bets that are called a Super Heinz, which included 120 parlay combinations. Adding individual bets for each leg will turn it into something called a Lucky 127.

To conclude, I highly recommend trying some Round Robin bets but start slow. Work your way up. Maybe start with just three-leg Round Robins since the potential loss is much lower. Tinker and experiment until you find your favorite type of Round Robins. Personally, Canadians are my bread and butter.

Should You Try Round Robin Bets?

Some think Round Robins are bad bets but if you know what you are doing, some serious pros outweigh the cons. To critics’ credit, it is rare when you can take a 2-1 effort betting point spreads and turn it into a losing or break-even day, but a Round Robin can do that.

Round Robins can also be very expensive due to the numerous bets involved. if you want to put $5 on a six-team Round Robin, using two-team and three-team parlays, you’re already at 35 parlays ($175 total). If you also want to bet the four- and five-team parlays off a list of six teams, you’re at $280. That said, some sportsbooks allow you to change your bet amount for each parlay. Instead of betting $5 on every parlay, you can bet less. Of course, that means the potential profit is smaller.

Overall, if you are a seasoned betting veteran and know your stuff, Round Robins are a safer option than parlays with plenty of upside and little risk. I recommend trying them out.