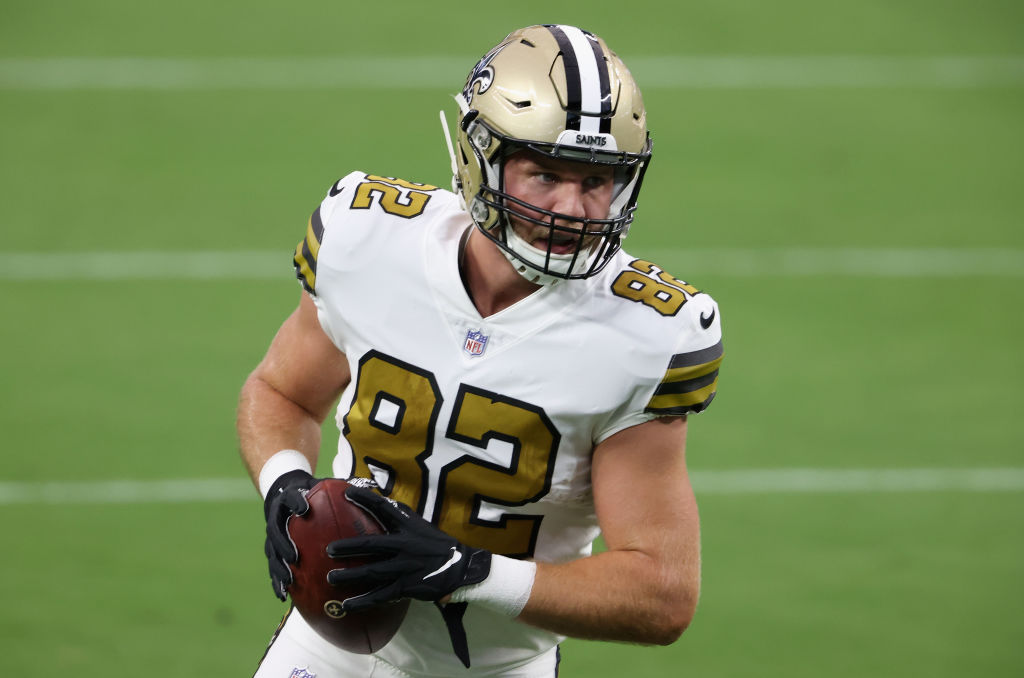 After a wild two weeks chock-full of upsets, the surprising results continued in Week 11 as the last-place Texans held off the first-place Titans, the Colts shocked the Bills, and the Vikings won another one-possession game over the Green Bay Packers. There are only three weeks left until the fantasy football playoffs begin, so it is more critical than ever to add the right players off the waiver wire to make that final postseason push.

Only two teams are on bye in Week 12, but they are two of the most fantasy-relevant rosters in the NFL. The Kansas City Chiefs and the Arizona Cardinals get the week off. Fantasy owners will need to find replacements for Patrick Mahomes and Kyler Murray at the quarterback position, Clyde Edwards-Helaire, Darrell Williams, and James Conner at the running back position, Tyreek Hill, DeAndre Hopkins, Christian Kirk, and Rondale Moore at wide receiver, and Travis Kelce and Zach Ertz at the tight end position. So without further delay, let’s take a look at the top waiver wire options at each position heading into Week 12 of the fantasy football season.

Newton was the top quarterback on the waiver wire after his first outing with the Panthers in Week 10. He remains the most viable option at the position following his first start in a Week 11 loss to his former coach, Ron Rivera, and the Washington Football Team. Newton posted 235 total yards and three touchdowns. Washington has one of the worst defenses in the league, but Newton has a massive ceiling due to his ability to find the end zone with his legs. On Sunday, he managed 46 rushing yards and a touchdown. Newton has two favorable matchups on the horizon against the Miami Dolphins in Week 12 and the Atlanta Falcons in Week 13. Miami ranks in the bottom third of the league at defending opposing quarterbacks from a fantasy perspective. If you own Mahomes or Murray, Newton is the guy to scoop up off the waiver wire if he’s still available.

The rookie shouldn’t be available in fantasy leagues, but I’ve seen him on the waiver wire in shallower formats. Jones has led the Patriots to five consecutive victories and New England is now the top dog in the AFC East. Jones didn’t have the game that many anticipated against the Falcons on Thursday Night Football, but that was largely due to a run-heavy game script. That said, Jones and the Pats get another favorable matchup at home against a Titans defense that allows the fifth-most fantasy points per game to opposing quarterbacks. In each of his last two home games, Jones produced 326 yards and two passing touchdowns, as well as 198 passing yards and three passing scores. Not only are the Titans dreadful against quarterbacks, but they allow the most fantasy points per game to opposing wide receivers. New England’s passing game should flourish in a clash of two AFC heavyweights in Week 12.

After Elijah Mitchell broke his finger, Wilson drew the start against the Jacksonville Jaguars. Although Wilson earned 20 touches, he only managed 58 total yards and one reception. He didn’t produce the numbers fantasy owners would like from a starting running back, but the opportunities were there, which is encouraging. Wilson almost scored a touchdown, but Jimmy Garroppolo missed him on what should have been an easy score. Mitchell probably won’t be out for too long, however, Wilson has an incredibly favorable postseason schedule against the Falcons, Titans, and Texans. He’s worth picking up in case Mitchell goes down with another injury once he returns. We know that Wilson will see plenty of touches in the rookie’s absence.

Michael Carter went down with an ankle injury late in New York’s 24-17 loss to the Miami Dolphins on Sunday. If the rookie misses time, Coleman and Johnson should form a committee in the backfield. The Jets get a Week 12 matchup against a Houston defense allowing the second-most rushing yards per game. Coleman probably has a better chance at scoring a touchdown, but Johnson is the guy with more value in PPR formats. If Carter misses Week 12, either running back could be a decent bye-week filler at the flex position.

DJ was most likely dropped a long time ago in most fantasy leagues due to his lack of production. Johnson isn’t the same guy he was when he broke out as a member of the Arizona Cardinals. He’s not nearly as explosive as he once was and he plays on one of the weakest offenses in the NFL. However, Johnson earned 16 touches in the Texans’ Week 11 upset over the Tennessee Titans. Yes, he only managed 34 total yards, but how many running backs on the waiver wire are capable of getting 15+ touches? DJ has a matchup in Week 12 against a Jets defense that has been absolutely shredded by opposing running backs this season. New York allows the most fantasy points per game to the position. Johnson isn’t very trustworthy, but he has some flex appeal with Tyrod Taylor back in the starting lineup.

After missing five games with a hip injury, Valdes-Scantling only caught three-of-four targets for 60 yards in his first two games back. With Allen Lazard out of the lineup with a shoulder injury, MVS stepped up in a major way for the Packers in Week 11. He saw a team-high 10 targets and hauled in four receptions for 123 yards and a touchdown. Most of his production came on a late 75-yard touchdown, but the number of targets bodes well for Valdes-Scantling if Lazard is unable to suit up in Week 12. Valdez-Scantling reached a top speed of 22.09 MPH on his late touchdown against the Vikings, the fastest speed by a ball carrier this season. MVS is a boom-or-bust type of player, but with Aaron Rodgers under center, you have to like his potential. The Packers have a tough matchup on the horizon against Aaron Donald, Jalen Ramsey, and the Los Angeles Rams. If Ramsey shadows Davante Adams, MVS could be in line for even more looks from Rodgers. Even if Ramsey doesn’t shadow Adams all game, Adams will most likely get double teamed, forcing Rodgers to throw in Valdes-Scantling’s direction. If Lazard misses Week 12, MVS could be the best wide receiver available on the waiver wire for streaming purposes.

Amari Cooper was not active in the Cowboys’ Week 11 loss to the Kansas City Chiefs after testing positive for COVID-19. Since the Cowboys will be suiting up on Thanksgiving, Cooper won’t be able to return to the lineup. Moreover, CeeDee Lamb left Sunday’s game against the Chiefs with a concussion and he may also not be able to return in time in a short week. If Lamb cannot go, Wilson will slot in as the WR2 behind Michael Gallup. Wilson saw seven targets against the Chiefs and caught four passes for 36 yards. If you own Tyreek Hill or DeAndre Hopkins, or need a replacement for Cooper or Lamb, Wilson could be your guy. He’s poised to be on the field quite often against the Raiders on Thursday.

With Allen Robinson sidelined and Andy Dalton filling in for the injured Justin Fields, Goodwin made his presence known in the Bears’ Week 11 loss to the Baltimore Ravens. The former San Francisco 49er hauled in a 49-yard touchdown pass. He finished with four receptions for 104 yards and the aforementioned score on eight targets. He was Dalton’s favorite option after Darnell Mooney. If A-Rob returns for Chicago’s Week 12 matchup against the winless Lions, Goodwin is probably not worthy of a roster spot. However, if Robinson is unable to go, Goodwin has significant upside considering his big-play ability. This is a situation worth monitoring closely.

Anderson was most likely dropped after doing almost nothing with his former quarterback, Sam Darnold, under center. But since P.J. Walker and Cam Newton took over in the last two weeks, Anderson has caught nine passes for 67 yards and a touchdown. D.J. Moore and Christian McCaffrey are rightfully the top two options in Carolina’s offense, but Anderson has seen a slight uptick in volume and production since Newton returned to the Panthers. While he’s very difficult to trust, he does face a Miami Dolphins defense that is allowing the third-most fantasy points per game to opposing wideouts in Week 12.

Westbrook-Ikhine had his breakout game in Tennessee’s surprising loss to the Houston Texans. He hauled in seven receptions and eclipsed the 100-yard marker for the first time in his career. With Julio Jones still on Injured Reserve, NWI is the WR2 behind A.J. Brown. It looks like Marcus Johnson’s breakout performance last week was a bit of a fluke. Westbrook-Ikhine is clearly the superior option. Although the talent is there, I wouldn’t recommend starting Westbrook-Ikhine against a New England Patriots secondary that has been lights out all season long. That said, picking the rookie up could pay dividends down the stretch if Jones remains sidelined longer than expected or if Brown goes down with an injury of his own. Without Derrick Henry, the Titans are letting Ryan Tannehill air it out more than they did early on in the season. NWI could be a solid late-season addition.

Over the first seven games of the season, Trautman didn’t live up to the sleeper expectations that some experts in the industry anticipated. He caught just 11-of-19 targets for 104 yards over that span, and most fantasy owners (rightfully so) gave up on the tight end. However, Trautman has produced a late-season revival, catching 14 passes for 137 yards and a touchdown on 21 targets over the last three weeks. In the Saints’ Week 11 loss to the Philadelphia Eagles, Tratuman recorded season highs across the board (five receptions on eight targets for 58 yards) and his first touchdown of the season. The Saints will face a very tough Bills defense in Week 12, but the Colts just managed to score 41 points against Buffalo on Sunday. Trautman has emerged as one of Trevor Siemian’s go-to targets and could be worthy of a starting spot if you need a bye-week cover for Travis Kelce or Zach Ertz.

Engram hasn’t played yet in Week 11, but regardless of the outcome, he is worth considering if you need a tight end in Week 12. Although the reception and yardage outputs aren’t anything to write home about, Engram has scored touchdowns in each of his last two games heading into a Monday Night Football matchup with the Tampa Bay Buccaneers. Next week, the Giants will face an Eagles team that has improved as the season has progressed. Their improvement has mostly been on the offensive side of the ball though, which means Daniel Jones will be forced to throw the ball as the G-Men attempt to keep up. Philly just allowed season highs across the board to Adam Trautman (17 fantasy points) and have permitted the most fantasy points per game to opposing tight ends this season. Aside from Nick Vannett, every single tight end who has been targeted against the Eagles since Week 7 has managed to produce double-digit fantasy points. It’s quite simple.. Stream tight ends against the Eagles.