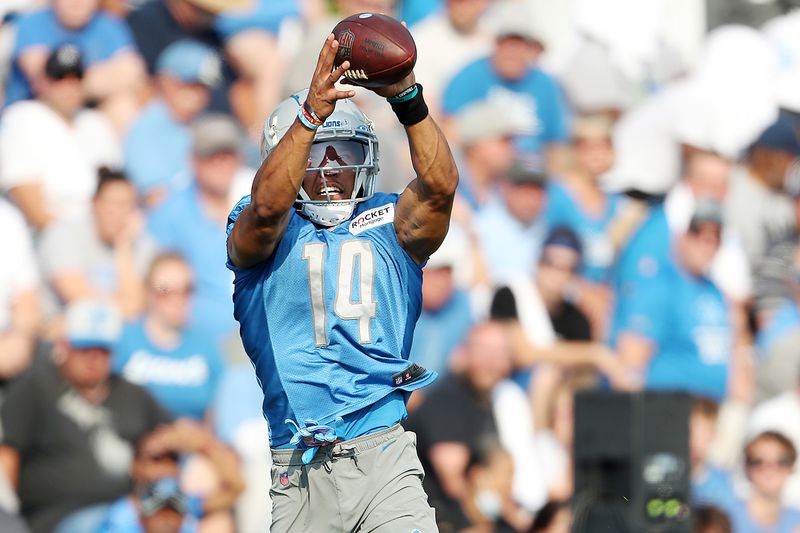 Finding some late-round wide receivers who have upside is critical on draft day in your fantasy football leagues.

In Detroit, head coach Dan Campbell is looking for answers to help his team improve from one of the worst teams in the NFL to a roster that can compete. Key to this rebuild are some of the team’s youngsters, including WR Amon-Ra St. Brown. 2021 was St. Brown’s rookie season. He recorded 90 catches for 912 receiving yards (10.1 yards per catch) and five receiving touchdowns. Heading into 2022, he is the team’s best option at the position.

Although the Lions drafted Jameson Williams out of Alabama in the first round of the 2022 NFL Draft, St. Brown should remain Jared Goff’s go-to target after the chemistry the two developed (particularly late last season). St. Brown caught a touchdown on the very last play of the game to give the Lions their first victory of the season last year in December against the Vikings. Some analysts may think that Williams will dip into St. Brown’s target share but Williams’ arrival may actually help the second-year wideout gain more space and one-on-one opportunities against less-skilled cornerbacks. Look for St. Brown in the middle-to-late rounds of your fantasy football draft. Given the way he finished last season, he is an absolute diamond in the rough in PPR formats.

The Baltimore Ravens are heading into this season without Marquise “Hollywood” Brown. Brown served as Lamar Jackson’s go-to target at the wide receiver position for the last two years. Now, Hollywood is in Arizona with Kyler Murray. This means that at the moment, Rashod Bateman is Baltimore’s top option at the wide receiver position (though Mark Andrews will still see the most targets of any Ravens pass catcher). Despite a slow start, Bateman tallied 515 receiving yards and one touchdown in his rookie season. He was drafted in the first round of the 2021 NFL Draft. Without Marquise Brown on the roster, Bateman is poised to see a ton more targets in his second NFL season. He could be a steal given Baltimore’s potential offensively.

Though Juju Smith-Schuster played very little last season, he should have a pretty big year in 2022 with the Kansas City Chiefs. His new team traded away WR Tyreek Hill to the Miami Dolphins this offseason, which will open up the field for the remainder of the Chiefs receivers and now Smith-Schuster. In 2018 (his sophomore season), JuJu exploded for 1,426 yards and seven touchdowns. That was after going for 917 yards and seven touchdowns in his rookie season playing behind WR Antonio Brown. Injuries slowed him down in 2019 but he bounced back for nine touchdowns and 831 yards in 2020. Unfortunately, injuries kept him to just 15 receptions, 129 yards and no touchdowns in 2021.

The New Orleans Saints traded up in the 2022 Draft to pick up WR Chris Olave with the No. 11 overall selection. Olave played alongside WR Garrett Wilson at Ohio State University where the duo exploded (Wilson was just before Olave with the No. 10 overall selection by the NY Jets). Olave is without a doubt one of the best if not the best receiver in this year’s draft, and he will be going neck and neck with his former teammate in his rookie season.

The reason Wilson is expected to be drafted so much higher is because he will be the Jets’ top option at the position whereas Olave will be competing with Jarvis Landry to be the Saints second-best route-runner behind Michael Thomas. Although Olave won’t get to suit up with Drew Brees, Jameis Winston had a tendency to air it out and produce great seasons for his wide receivers. Just look at how Mike Evans performed when Jameis was under center in Tampa Bay. Winston may not be the best quarterback in the NFL but he’s the type of quarterback you want throwing the ball to one of your starting wideouts in fantasy football. Olave is going to see a ton of one-on-one coverage with Thomas and Landry running routes beside him. You can get Olave super late so he’s worth the dart throw.