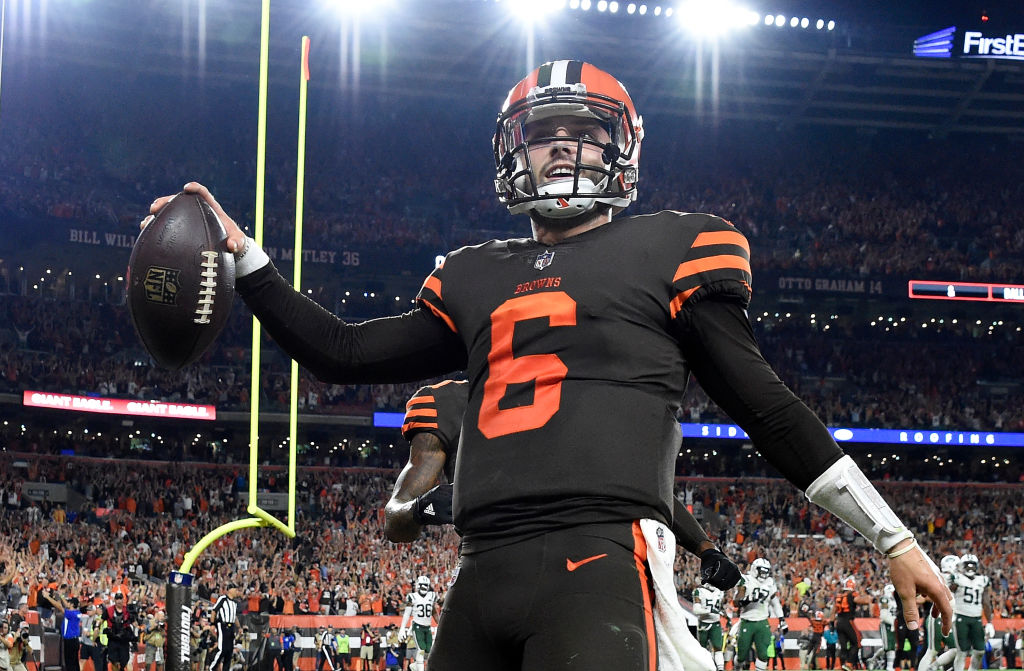 It’s an end of an era in Carolina. The days of Sam Darnold starting football games appear to be over. The Panthers were communicating with Cam Newton about bringing him back yet again but the Panthers instead opted to send a future fifth-round pick to Cleveland in exchange for Baker Mayfield. Check out Steve Smith's reaction to the trade.

In the real world, this may not be a move to get overly excited about in Carolina. Yes, it’s an upgrade at the quarterback position but can Baker Mayfield lead the Panthers deep into the postseason? Somehow, I don’t think Mayfield is quite enough from that standpoint.

That said, fantasy football owners with any members of the Panthers on their squad must be ecstatic. Mayfield isn’t someone I would trust on my fantasy squad but his poise under center could result in significant increases in production from Carolina’s most prominent skill-position players. Wide receivers D.J. Moore and Robby Anderson were forced to play with some inaccurate quarterbacks such as Newton, Darnold, and PJ Walker last year. Moore should improve more than anyone as the main possession receiver in this offense but Anderson could go back to his days of producing 80-yard touchdowns with a decent quarterback at the helm. Not only will the wide receivers be more valuable in 2022 but Christan McCaffrey’s production may also be impacted by Mayfield’s arrival. Opposing teams will no longer be able to stack the box and focus exclusively on Carolina’s running game with two solid receivers on the outside and a somewhat respectable quarterback under center.

Despite playing through two shoulder injuries last season, Mayfield was much more efficient than Carolina’s starting quarterback, Sam Darnold. Mayfield had a better completion percentage and average of 7.2 yards per attempt compared to Darnold’s 6.5 yards per attempt. This means that Mayfield is capable of stretching the field more, which should result in McCaffrey having a bit more running room than he did with Darnold on both rushing plays and passing plays out of the backfield. Despite a productive four games with Darnold last season, McCaffrey never reached his full potential even when healthy. He averaged just 3.8 yards per carry compared to 5.7 yards per carry in the three games he suited up for with Darnold on the sidelines. That is a substantial difference and CMC should see better statistics with Mayfield calling the shots.

That said, the one concern about the Mayfield-McCaffrey duo is that the Browns targeted their running backs very seldom last season. Second-string running back Kareem Hunt saw the most targets at the position last year (27) but that still ranked just eighth overall on the team. However, CMC is at his best when he has the ball in his hands with open space. If you add Hunt’s 27 targets, Nick Chubb’s 25, and D’Ernest Johnson’s 25, the Browns targeted their running backs a total of 77 times, not an insane amount but respectable. However, CMC was on pace to catch over 100 balls if he didn’t succumb to injury. Something tells me that the Panthers are going to make sure Mayfield utilizes the best dump-off option in the entire National Football League. McCaffrey should still tally at least 90 receptions in 2022. If Carolina doesn’t utilize McCaffrey the way he has been utilized in the past, his PPR value could slip significantly but I wouldn’t count on that. McCaffrey is still a first-round pick in all fantasy formats and is a top-five pick in PPR leagues.

Moore is one of the more reliable receivers in fantasy football but his owners may be a bit worried following this trade considering Mayfield’s struggles to get on the same page with Odell Beckham Jr. Beckham was only targeted 5.7 times per game before being released last year and eventually ending up with the Super Bowl champs. Could Moore see a decrease in value as well?

Although the Browns clearly employ a run-dominant offense, Moore has transformed into one of the most consistent wide receivers in PPR leagues over the last few years. Somehow, he managed to put up similar numbers no matter who was slinging him the rock, whether it was Darnold, Newton, PJ Walker, or even Teddy Bridgewater. None of those players are nearly as talented or accurate as Mayfield. Moore has posted between 1,157 and 1,193 receiving yards each of the last three seasons and has posted exactly four touchdowns each season. That said, he did have one season in which he caught 93 passes yet he had another season in which he only hauled in 66 receptions. He’ll need to get that volatility under control and he’ll need to find a way to get into the end zone more often. However, as the WR1 in this offense, this could be Moore’s best season yet with the most competent quarterback he’s ever shared the field with. Moore has demanded at least 118 targets in each of his three seasons with Matt Rhule. Rhule has no reason to not try to get Moore even more involved in the offense in 2022.

Lastly, Moore is not Odell Beckham. Beckham is a downfield receiver and his average target was 11.5 yards from scrimmage. However, Moore can make plays at all three levels of the defense and tends to see shorter passes thrown in his direction. This is incredibly important because Mayfield only completed 44.9% of his passes longer than 10 yards last season yet he completed 78.6% of his throws within 10 yards. All of this seems to suggest that Moore will have a top-15 season at the wide receiver position in PPR leagues.

Our mock draft simulator is a way to practice for your next draft or have a bit of fun. Try it out for free!

Anderson already had developed a rapport with Sam Darnold due to the time the due spent together with the New York Jets. Many pundits expected Anderson to have a huge year in 2021, especially since he was coming off a 1,000-yard campaign in his first season with the Panthers. Things didn’t turn out as well as anticipated though with Darnold manning the quarterback position. Instead, Anderson had perhaps his worst season in the pros to date. The quarterback-wide receiver tandem never got on the same page. Despite playing all 17 games, Anderson finished the season with a mere 53 receptions, 519 receiving yards, and five trips to the end zone. The majority of his production came without Darnold on the field. In Anderson’s 12 games with Darnold, he saw 6.8 targets per game, which isn’t so bad. You would think he’d be able to turn that into a decent stat line. However, he averaged just three receptions for 29.4 yards per game over that 12-game stretch. With Newton, he caught 5.3 passes for 41.5 yards per game, but both of those were significant dropoffs in production when comparing his numbers with Teddy Bridgewater in 2020 (5.8 receptions per game for 70 yards).

Fortunately for Anderson, Mayfield plays quarterback very similarly to Bridgewater. Both quarterbacks are incredibly accurate in short-yardage situations. Bridgewater was even more accurate than Mayfield (87.4% on passes fewer than 10 yards) but he shared Mayfield’s downfield struggles.

Anderson is one of the fastest receivers in the NFL but just like Moore, he is also a more-than-capable receiver in the flats and underneath the secondary. Fantasy owners shouldn’t expect too many long-ball touchdowns, but Anderson could easily work himself back into the WR3 conversation in fantasy football after being nothing more than a bench warmer in 2021.