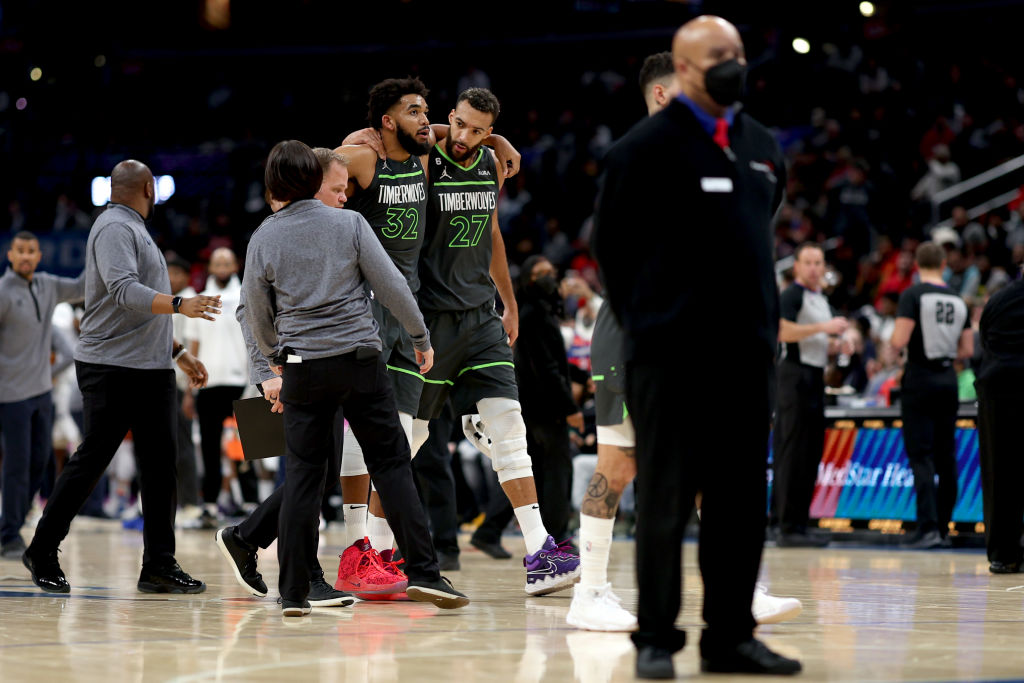 There is a combination of good and bad NBA injury news to report this week, so let’s start with the bad. Karl-Anthony Towns suffered a pretty severely strained hamstring last week. The Timberwolves are now expecting him to be out for another four-to-six weeks which means the Twin Towers of KAT and Rudy Gobert likely won’t be on the floor together until January. In addition, SG Bradley Beal of the Wizards also strained his hamstring and won’t be re-evaluated until next week.

The good news focuses on returns. Khris Middleton is back in the starting lineup for the Bucks and TJ Warren has finally made his way back to the NBA after not playing since 2020. Elsewhere, James Harden made his return last night while Robert Williams of the Celtics could be games away from returning to the action.

Let’s dive in on all the latest NBA injury news there is to report as it pertains to fantasy basketball this week.

Karl-Anthony Towns suffered a painful-looking injury on a non-contact play running back on defense last week on Nov. 28 against the Washington Wizards. He was diagnosed with a pretty serious calf strain which will keep him out for more than a month. Last week, ESPN’s Adrian Wojnarowski reported that Towns would be out for at least four-to-six weeks.

Current reports indicate that Towns realistically won’t return to the T-Wolves until at least early-to-mid January. Naturally, C Rudy Gobert should see an uptick in production in December in the wake of Towns’ absence. Without Towns, Minnesota lacks size at forward. Nonetheless, C Naz Reid should also see added minutes as we gear up for 2023.

Wizards’ star Bradley Beal strained his hamstring in the first quarter of Sunday’s game against the Lakers after playing three minutes in the contest. Washington has opted to rule him out for the week and have him re-evaluated the following week. With Beal and Rui Hachimura both out, the Wizards’ bench will really need to step it up on offense for the time being. This could mean a more active role for Will Barton, whose production has dropped since getting shipped from Denver.

Hawks’ wing De’Andre Hunter strained his right hip flexor late last week. As a result, the Hawks expect him to be out for at least one week. SG Jarrett Culver has seen his share of minutes increase over the last few games. Culver has played 30+ minutes in each of the last two games and produced near double-doubles in each.

The Hawks also lost John Collins late last week after he sprained his ankle. He is expected to miss at least two weeks. The Hawks will need to dive deeper into their bench to make up for Hunter and Collins who will both be out of the lineup over the next week. Jalen Johnson should continue to see big minutes and inflated production for Atlanta while the former Demon Deacon remains sidelined.

Lingering injuries continue to feed the narrative about Simmons’ first season with the Nets. He’s already missed eight of Brooklyn’s first 25 games of the 2022-23 season. Though his knee has been his main injury concern, Simmons is now dealing with a strain in his upper left calf and is expected to miss a few more games this week. It’s too bad that Simmons is sidelined again as he’s been playing better as of late. He’s played in seven of the Nets’ last 10 games and has averaged 12.0 points (75.5 FG%), 7.4 rebounds, 6.1 assists, 1.4 steals, and one block per game through this stretch. Once he returns to the lineup, he should continue to be a solid source of boards, assists, and steals in fantasy basketball Roto leagues.

Wendell Carter Jr. has been out of the lineup for Orlando’s last eight games. Carter suffered a strain in his right foot (specifically the “plantar fascia”). While Carter told reporters that he was feeling better, expect him to be out for at least the remainder of this week. This should expand Bol Bol’s and Mo Bamba’s roles as the team’s best available big men right now.

Nassir Little suffered a mild fracture in his right hip (specifically the “femoral head”). He is not expected to return to the Blazers before mid-January. As a result, Justise Winslow should see boosted production as a wing for the Blazers. However, Winslow has combined for just six points over the last two games. He had three consecutive double-digit scoring games. This includes a 21-point (9-11 FG), five-rebound, and four-assist performance against the Lakers on Nov. 30. While he scored few points over the last two games, he didn’t take many shots from the field. In those low-scoring games, Winslow produced a lot elsewhere. Though he had just two points (1-3 FG) in 39 minutes against the Jazz on Dec. 3, he produced seven rebounds, five assists, three steals, and one block. On Sunday, Winslow scored just four points (2-6 FG) in 23 minutes against the Pacers. Still, he finished the contest with six boards, three assists, and two steals. Winslow should benefit the most from Little’s absence out of any player on the Blazers.

Ahead of Monday night’s contest against the Rockets, the 76ers listed James Harden as questionable. Harden is back for the 76ers after missing about a month of action. He played 38 minutes against the Rockets last night and produced 21 points (despite 4-19 shooting from the field), four rebounds, seven assists, and two steals. He shot the ball poorly but was active and looked healthy. This is good news for the 76ers, who will still be without Tyrese Maxey for another week or two.

Tyrese Maxey is still about two weeks away from returning to the 76ers’ lineup after sustaining a stress fracture in his right foot. This is why it’s great news that Harden is back in the lineup. Shake Milton should return his fantasy value even though Harden has returned because he’s played very well and the 76ers will still be without the young Kentucky guard for another handful of games.

Rui Hachimura has missed the last eight games for the Wizards as a result of a bone bruise that he sustained before Thanksgiving. This season, Hachimura is averaging 23.5 minutes per game and producing 11.6 points (48.1 FG%), 4.8 rebounds, and 1.1 assists per game. With him out of the picture for at least another week, Kristaps Porzingis and Kyle Kuzma should see elevated roles. Over the last 10 games, KP has enjoyed a slight boost to his season-long numbers. Through this stretch, he’s played 34.4 minutes per game to average 23.5 points, 9.7 rebounds, 2.7 assists, 1.7 blocks, and nearly one steal per game. Wizards backup center Daniel Gafford has had a couple big games. He produced a 10-point, 12-rebound double-double with six blocks in just 24 minutes against the Hornets on Friday night. He followed that up with 19 points, seven rebounds, one assist, and two blocks in 21 minutes against the Lakers Sunday night. After these two performances, expect Gafford’s role to be elevated this week, at least until Hachimura returns.

Last Monday (Nov. 28), Nick Nurse stated that Precious Achiuwa would miss at least another two to three weeks. He partially tore a ligament in his right ankle on Nov. 9 in a 116-109 victory over the Houston Rockets and has been out since. Achiuwa is expected to be out until late December even though he is walking without a boot at the moment. With him out of the lineup, guys like Thaddeus Young and Chris Boucher should see boosted production over the next few weeks.

Robert Williams is expected to return sooner rather than later this season. The Celtics reported that he could be returning to the Celitcs’ lineup within the next week or so. Originally, many reports suggested Williams wouldn’t be ready until January. It seems like Boston’s big man has made a speedy recovery which is good news for the surging Celtics as they lack size down low. At the moment, PF Al Horford has been the team’s best option in the paint this season. Without Williams, the Celtics have a roster with some of the best forwards and guards in the league. He is the missing piece of the equation and his return could prove to be pivotal for the Celtics down the stretch.

Desmond Bane hasn’t played in any contest for the Grizzlies since Nov. 11. He is dealing with a Grade 2 toe sprain which he sustained in his last game. Last week, it was reported that Bane was no longer wearing his boot but is still not ready for full-contact practices. The best-case scenario would be Bane returning at the end of this week. However, it is more realistic to expect him back by next week. The good news is that he should be back for the Grizzlies very soon.

Khris Middleton made his season debut against the Lakers where he recorded 17 points on 54.5% shooting from the field, seven assists, and two rebounds on Dec. 2. The star shooting guard is back after completing his final phase of conditioning and has successfully recovered from the wrist injury he sustained early in last year’s playoffs. He played his second game of the season last night and had a rough shooting night finishing with just five points on 1-of-11 shooting from the field. Middleton missed all seven of his three-point attempts. Still, it’s good to see him back on the floor for the Bucks. Fantasy owners should be happy that he isn’t going to be out until January like some other big-name players who are sidelined at the moment.

T.J. Warren hadn’t scored a point since 2020 due to a rough recovery from a broken foot he suffered two seasons ago. He finally made his return to the hardcourt on Dec. 2 against the Raptors and scored 10 points (5-11 FG) in 17 minutes. He played 18 minutes against the Celtics on Sunday night but only scored four points. While this has little to no fantasy impact, real NBA fans should be happy for Warren like they were for Klay Thompson when he returned. Sure, Warren isn’t the superstar that Klay is, but he was unstoppable in the bubble and showed superstar potential. While he may never get back to that level of efficiency, he’s certainly worth keeping an eye on as he gets back into game shape.