2022 Fantasy Football Busts: Is Aaron Rodgers The Bust Of The Year? 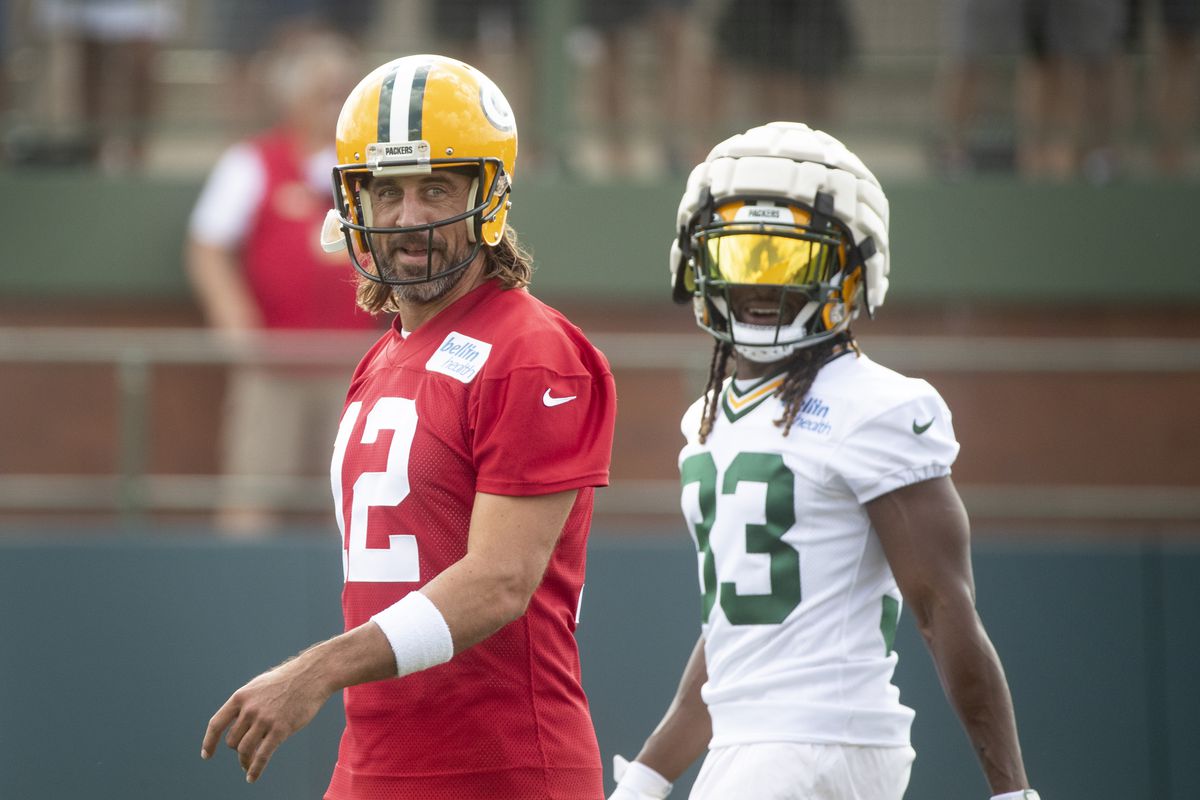 Aaron Rodgers has enjoyed a great career but he is poised to finish as the 2022 fantasy football bust of the year, and it isn’t even his fault.

The Packers lost Davante Adams and barely addressed the wide receiver position this offseason. Rodgers will be playing with some guys he has chemistry with but with perhaps the worst talent around him since he entered the NFL.

Aaron Rodgers has lost his best offensive weapon and his go-to target. With Davante Adams joining the Raiders, the Packers are left with Allen Lazard, veteran Randall Cobb, and rookie Christian Watson (No. 34 Overall Pick). The Packers signed Sammy Watkins this offseason, and he is poised to have a bounce-back season as one of the more trustworthy targets on the team (not that is saying much). Nonetheless, the Green Bay Packers now have one of the weakest receiving corps in the NFL. According to PFF, the Packers have the second-worst receivers heading into 2022, only ahead of the Chicago Bears who lost WR Allen Robinson to the Rams.

Right now, Rodgers potentially has the worst group of pass-catchers he’s had in any regular season of his career. Sammy Watkins, who could be one of Green Bay’s top weapons this year, only produced 394 yards and one touchdown last season for the Ravens. He also only caught 55.1% of the passes Lamar Jackson threw his way in 2022 (27 catches for 49 targets). Allen Lazard had eight touchdowns, but just 513 receiving yards and 40 receptions. If the Packers are going to be successful in the passing game, Lazard is going to have to establish an even better rapport with his quarterback. Randall Cobb had 375 receiving yards and five touchdowns, which isn’t terrible for a veteran who also missed a little time with injuries. Still, if this foursome is the team’s top-four at the position, Green Bay will be in serious trouble offensively this season, and it will affect Rodgers’ numbers drastically as he plays in his 17th season for the Packers.

Expect the Packers to rely on Aaron Jones and AJ Dillon to move the chains more than ever from the backfield. Rodgers is in for perhaps his worst season to date.

Leonard Fournette reported to training camp weight over 260lbs but has dropped down to 245 lbs according to recent reports. Tampa Bay’s RB1 still needs to lose some weight before the season gets going and has time to do it. Still, the fact that he reported to camp weighing so much is concerning. He could get injured in camp if he and the Bucs aren’t careful.

While Fournette could be completely fine by the first week of September, he reported to camp unbelievably out of shape. That was enough for me to include him on this list. Remember that the Buccaneers amped up their wide receiver corps by adding Julio Jones to a depth chart that already included Mike Evans, Chris Godwin, and Russell Gage. Not to mention, although Rob Gronkowski is likely going to remain retired, the Bucs brought in Kyle Rudolph as a second tight end behind Cameron Brate. Tampa Bay is going to throw the ball a ton with all the pass-catchers Tom Brady has in his arsenal.

If Fournette hadn’t put on all this weight heading into camp, he wouldn’t be on this list. But as we’ve seen with guys like Zion Williamson, or in a worst-case scenario, Jamarcus Russell, things can really go badly. Let’s hope that isn’t the case for Fournette as he gets ready to head into the 2022 season.

For multiple reasons, RB Josh Jacobs could be seeing a down year in 2022. First, the Las Vegas Raiders have the 29th worst rated offensive line according to PFF’s NFL Offensive Line Rankings. This will give Jacobs less time to think about his next step once Derek Carr hands him the ball. You’ll see him likely have more carries for losses than he did last season as a result. In addition, under head coach Josh McDaniels (formerly of the pass-heavy Patriots offense), the Raiders are turning into a more pass-heavy offense, especially after the offseason acquisition of WR Davante Adams. He joins WR Hunter Renfrow and TE Darren Waller who could combine to produce one of the most potent offenses in football in 2022. Plus, Kenyan Drake is still in the mix and may be utilized more than Jacobs in obvious passing situations just like last year and the Raiders did draft Zamir White. Overall, Jacobs is going to fall flat on his face in 2022. Avoid him at all costs.

Ezekiel Elliott’s production has been in decline for four consecutive seasons now, and this is why he was one of the top RBs we suggested you avoid drafting according to current ADP values at the running back position. In fact, Zeke has rushed for fewer yards per game each season since his rookie year. In 2016, Elliott rushed for 108.7 yards per game whereas, in 2021, he rushed for a career-low 58.9 yards per game. He also averaged less than 4.5 yards per carry in each of the last two seasons (4.0 Y/A in 2020, 4.2 Y/A in 2021). The Cowboys have also been giving more plays and rushing attempts to Tony Pollard, who recorded 719 yards on 130 rushing attempts last season. While one Dallas rusher has earned more snaps in recent seasons, the other has seen steep declines in rushing attempts and targets. Zeke’s trajectory is pointing in the wrong direction. Plus, considering the number of carries he has had over his career and the big hits he’s taken, he may simply no longer be an elite running back. Although Zeke is still somehow being drafted in the second or third round, savvy fantasy owners know better to fade the former All-Pro running back entirely.