How to determine if a fantasy football trade is fair

A fair trade is when both teams essentially win and both get what they want out of the deal. Sometimes it's hard to figure out a fair trade because it is hard to evaluate player worth. That is where we come in to help evaluate the trade using our fantasy football trade analyzer.

This advice of a fair trade can apply to any fantasy sport, such as fantasy basketball or baseball, and not just fantasy football. It can involve any type of player and not just a star like Antonio Brown.

We provide an unbiased opinion by assigning each player a player rating, often referred to as their FSP rating. We analyze dozens of categories, expected projections, expert rankings, injury status, and lots more. We tally all of that up and come up with their rating.

Now that we understand where the ratings come from, let's see how this applies to a fair trade.

To ensure a fair trade, try to make sure that both sides of a trade have as close of a player rating total number as possible.

Ideally there should only be a few points difference between each side of the trade. If there is a 5x5 trade, then that number could be higher and hit 15+ total points. If there are fewer players in the trade, such as a 2x2, then that number should be in the range of 5 to 10 or less.

That is where the baseline is and what league owners and commissioner should strive for. 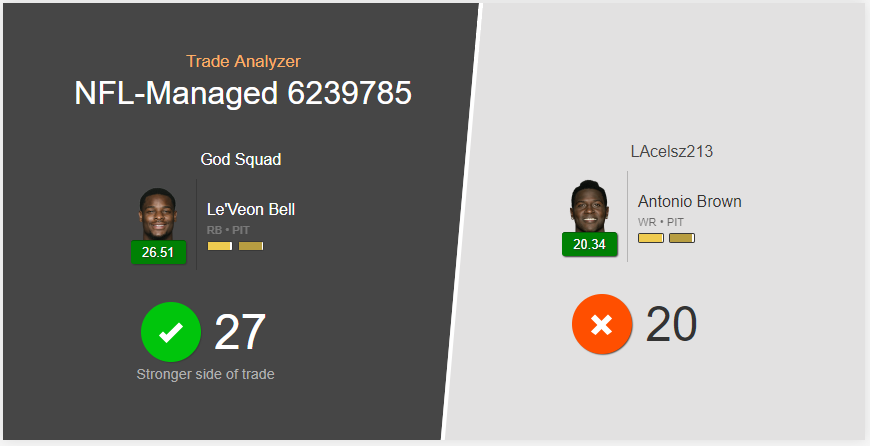 We offer an additional analysis of a trade for paying members which shows their team ratings, current roster, positional ratings, projections, and the effects of the trade on their projection.

This is the important part because it can show how a seemingly fair trade could be quite lopsided depending on the needs of the team and the competitiveness of the team. 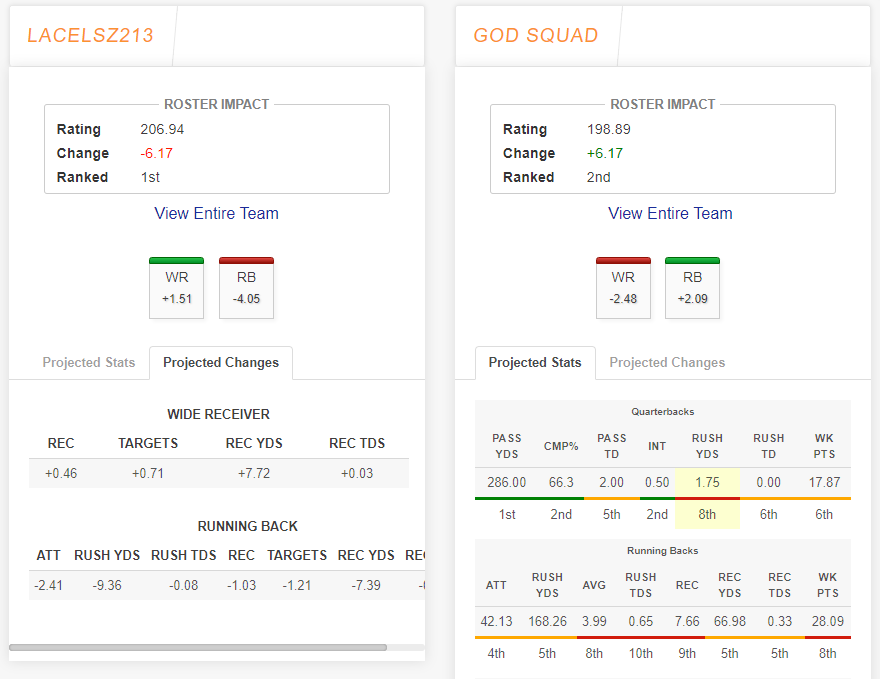 On paper, this looks like a fair trade. The ratings between the two players are close. Each team is getting an elite player and will improve either their running backs or receivers.

You'll notice that each team has two seperate tabs called Projected Stats and Projected Changes to help you evaluate changes before and after the trade. Obviously by giving up Antonio Brown, that team will have their recieving stats negatively impacted while the other team will gain.

Take a look at Projected Stats. Notice how some categories under Running Backs are in the red or orange for "God Squad"? This is indicating that the team is weak in running backs and it's no wonder that they want Le'Veon Bell in this trade. This trade makes sense for their team.

Does the same apply for the other team in the trade? Do they need to beef up their wide receiver position? As we said earlier, both teams should get what they want out of the trade and feel like they've won. In this example, both teams do win.

Pay close attention to the rankings for each team. Notice how it is showing the 1st and 2nd ranked teams? That tells me we are dealing with two competitive teams and important for both teams involved and is a great sign for a fair trade.

The last thing you want to see happen is a bottom ranked team trading with a top ranked team late in the season.

Why? Well, why would a bottom ranked team even bother? This could lead to an imbalanced 'super' team and potentially an unfair trade. The only exception would be if the team involved in the trades are looking towards next year in a dynasty league.

These are all questions that fantasy owners should look at and then vote on before accepting any trade. Use FantasySP as an unbiased way to evaluate trades for your league. As a FantasySP member, you can link to this trade back on your league homepage and show them how the trade impacts both teams.

This example just so happens to be football, but the same logic and functionality applies to all types of leagues.