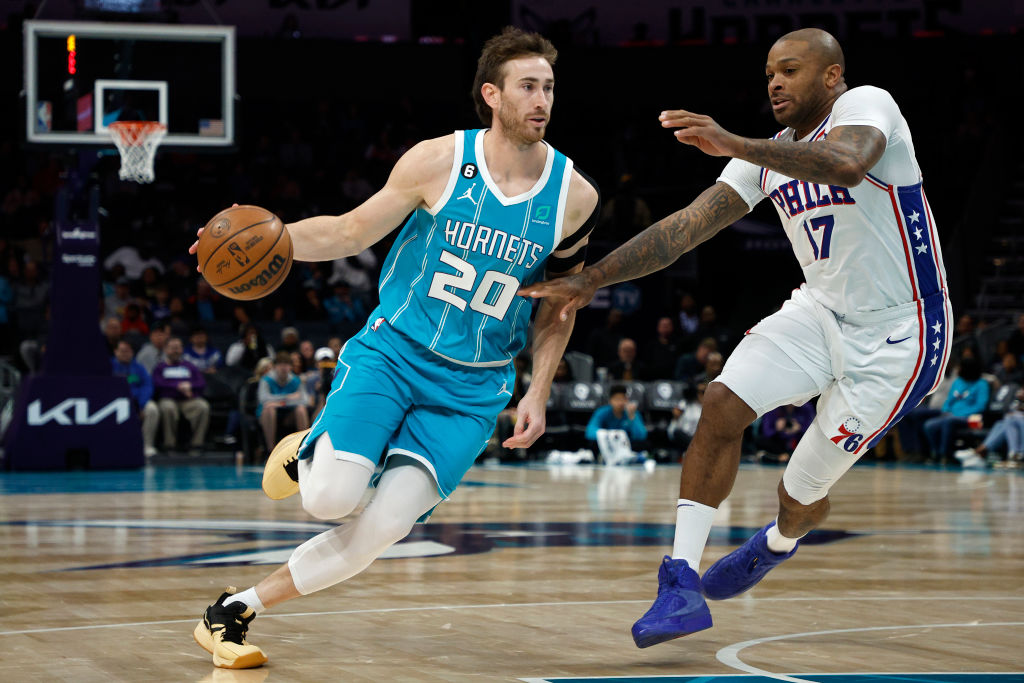 In Week 7 of the NBA season, there are multiple new injuries to report. Notably, SF Gordon Hayward of the Charlotte Hornets fractured his left shoulder which will keep him out indefinitely. Elsewhere, Karl-Anthony Towns suffered a painful-looking calf strain on a non-contact play in the Timberwolves’ last game.

We’ll also look at the most recent updates surrounding the injury statuses of Kawhi Leonard, Damian Lillard, James Harden, Chris Paul, and Tyrese Maxey who could still be weeks away from returning to full health.

For a few games before being diagnosed with a fracture in his left shoulder, Gordon Hayward participated in a handful of games for the Hornets but looked like a shell of himself. The specific part of his shoulder which is fractured is called the “scapula” which the Hornets allowed him to play with, thinking it could have been a serious bone bruise. Hayward’s wife was very vocal in expressing her disappointment in the Hornets who allowed her husband to play with a fracture in his shoulder.

While it isn’t the most obvious fracture to detect, the Hornets clearly messed up and were unprofessional in allowing Hayward on the court at all with an injury like this. Even if he expressed his desire to play through pain, the fact that he couldn’t lift his arms up should have been enough for Charlotte to shut him down. It looks like Hayward will now be out for months, meaning that injury issues to the Hornets are only getting worse into the 2022-23 NBA season.

Karl-Anthony Towns is set to undergo an MRI to take a look at his right calf which he seemed to have strained on a non-contact play as he was running to get back on defense against the Wizards on Monday night. Initial reports indicate that KAT may have gotten lucky and avoided a serious injury that could have kept him out for months. As we await the results of his MRI, there is more optimism than gloom coming out of the Timberwolves camp regarding the injury Towns sustained on Monday night.

CJ McCollum entered the league’s health and safety protocols for COVID-19 on Thanksgiving day which kept him out of New Orleans’ Friday night (Nov. 25) game against the Memphis Grizzlies. McCollum has missed the last three games for the Pelicans and will likely miss a few more games this week. Despite getting hit with COVID-19, McCollum is healthy this season and should be back in action imminently. He is averaging 18.7 points, 5.1 rebounds, 6.1 assists, and 1.2 steals in 35.1 minutes per game through 17 contests this season.

Jeff Green is expected to be out indefinitely after suffering a knee injury last week. While Green’s injury doesn’t show signs of structural or ligament damage, the Denver Nuggets and Mike Malone seem to think that he is dealing with a serious bone bruise. At 36 years old, the veteran forward will be out for the “foreseeable future.” An injury like this will take more time for him to recover from than a forward in his mid-twenties. There is no reason for the Nuggets to rush him back to action before he feels totally healthy. The Nuggets have enough depth on their bench which should allow them to carry on just fine without the seasoned veteran.

Wizards PF Rui Hachimura has missed the last five games for the Wizards starting with their Nov. 20 contest against the Charlotte Hornets. He was questionable ahead of Monday night’s game but was ultimately ruled out. This means that his injury isn’t too severe and that Hachimura should be back for the Wizards very soon.

Bones Hyland is dealing with a non-COVID-related illness. As a result, he’s missed the last three games for the Nuggets. This season, Hyland is averaging 15 points per game through 13 games where he’s played 21.5 minutes per outing. Offensively, Hyland is making big strides in his second NBA season. Whereas he finished last season shooting 36.6% from downtown, he’s converted on 44% of his shots from beyond the arc this season. He provides Denver with some red-hot energy off the bench.

At the moment, the Detroit Pistons are deciding whether or not rest or surgery will be required for Cade Cunningham to recover from a stress fracture in his shin. His injury status remains unclear as the Pistons have been relatively quiet about what Cunningham is dealing with. He’s been out for more than 10 games now and is expected to be out indefinitely. This should boost the production of other wings and guards on the Pistons such as Saddiq Bey, Jaden Ivey, and Killian Hayes.

Paul George will be out for the remainder of the Week as a result of the hamstring injury he's been dealing with. The earliest George is expected to return is Saturday but knowing how the Clippers deal with their two superstars, PG-13 should remain sidelined for the rest of the week. Considering Luke Kennard and Kawhi Leonard are also sidelined, there are massive streaming opportunities on the Clippers’ roster.

Chris Paul is dealing with a nagging heel injury which has kept him out of the Suns lineup since Nov. 1. Though CP3 has missed the last month of the season, Phoenix has done well without him. Nonetheless, the Suns need him on the court when he is healthy. While there is no timetable for his return, the team has said he would be re-evaluated in a few weeks meaning that he will still be out for multiple games into December. We’ll have to keep an eye on the news coming out of the Phoenix camp in regard to their start point guard. In the meantime, Cameron Payne should continue to see an uptick in minutes and production while Devin Booker’s usage rate should remain sky-high.

Desmond Bane has been out since mid-November with a Grade 2 toe sprain in his right foot. When these reports came out, the Grizzlies indicated that they would re-evaluate Bane in 2-3 weeks. As a result, we could be getting some news from the Memphis camp about his injury status soon. However, Bane will still remain out for at least another week or two as a result of his sprained toe.

T.J. Warren basically hasn’t played since the NBA bubble at the end of the 2019-2020 season. He spent the entirety of the last two seasons on the Indiana Pacers’ Injured Reserve. The Brooklyn Nets acquired Warren this offseason, and finally, it seems that he will get to make his NBA return within the next few games. He was one of the most electrifying players in the NBA bubble, but this foot injury has been absolutely devastating to him and his potential to return healthy. After more than two years, it looks like Warren is set to come off the bench for the Nets very soon and make his return to the NBA.

Kawhi Leonard will remain out for the Clippers on Wednesday night due to an ankle injury that he’s been dealing with since the season began. Taking into consideration the issues he’s had with his knee, the Clippers continue to be very cautious with Kawhi. He finally recovered from a torn ACL this season, only to now return with an ankle injury. He’s missed the last three games and will likely miss a few more. This season, Leonard has played in five games for the Clippers, averaging 22.4 minutes, and is producing 10 points, 4.0 rebounds, and 3.4 assists per game. Despite his very limited minutes on the floor this season, the Clippers’ superstar simply has not been able to stay healthy.

James Harden is on track with his recovery process and should be getting back into action soon for the Philadelphia 76ers. All the news out of the 76ers camp has been positive, indicating that Harden is on track to return within a month or so from the date he injured his foot. Since Tyrese Maxey has been out as well, Shake Milton has been on an offensive tear over the last few games.

Damian Lillard is still about one week from being re-evaluated after an MRI revealed a Grade 1 strain on his calf. This means that for the time being, Anfernee Simons will continue to serve as the Blazers’ starting guard. He’s been impressive on offense throughout the season and continues to score big, especially in games where Lillard is out of the picture.