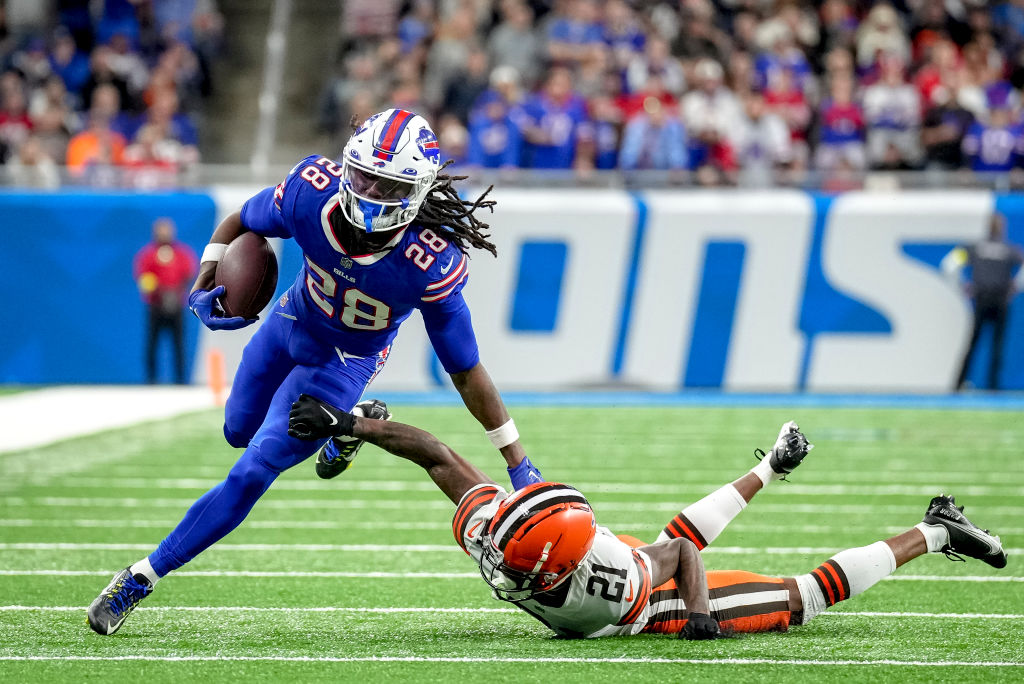 While fantasy football free-agent quarterbacks and tight ends are more difficult to pinpoint as we head into Week 14, there is a surplus of running backs and wide receivers to target from waivers in fantasy football leagues right now. RB James Cook has seen his share of carries increase substantially out of the Bills’ backfield. He produced more receiving and rushing yards than Devin Singletary on Sunday. Elsewhere, Cam Akers has returned to the Rams and had a two-touchdown game on Sunday in their loss to the Seahawks.

At receiver, Jahan Dotson, Nico Collins, and Michael Gallup stand out as three guys who’ve seen their production increase over the last few weeks yet remain available from waivers in many fantasy football leagues right now.

Let’s take a look at the top free-agent running backs and wide receivers to target from waivers as we head into Week 14 of the 2022 NFL season.

Over the last few weeks, the Bills have been giving more touches to their rookie running back. Cook had a much bigger game than Singletary in Week 14. He had 14 carries for 64 rushing yards and six catches for 41 receiving yards to help the Bills defeat the Patriots 24-10 in an AFC East showdown on Thursday night. Singletary had 13 carries for 51 yards and one touchdown, but failed to make a single catch in the game. It seems Sean McDermott is turning towards the rookie as the primary pass-catching running back in Buffalo, which is particularly valuable for PPR fantasy football owners. Though Cook did not get a touchdown in the contest, he has earned a more significant role out of the Bills’ backfield and finished Week 14 with 105 all-purpose yards. He had one more carry and was targeted four more times than Singletary this week. At the moment, Cook is available as a free-agent running back claimable from the waiver wire in more than 70% of fantasy football leagues. While he is trending up, Singletary’s production seems to have stalled.

Seattle’s backfield is all banged up after Kenneth Walker exited Seattle’s Week 13 win. Dallas is just about the only guy still standing and he’s capable of producing both in between the tackles and as a pass catcher out of the backfield. On Sunday, he had 10 carries for 37 rushing yards. Heading into Week 14, the Seahawks’ depleted backfield could allow DeeJay Dallas to have an inflated fantasy value at least until Kenneth Walker gets healthy again. Since he has barely played this season, Dallas is available in more than 98% of fantasy football leagues at the moment and could be one of the best free-agent running backs who you might even consider starting in Week 14 due to the injuries facing Seattle’s running backs.

Mason is emerging as a top handcuff in fantasy football now that he’s the primary backup to CMC with Eli Mitchell out for the season. Jordan Mason has played in each of the last three games for the 49ers and has earned more carries in each subsequent game. After five rushing attempts for 25 rushing yards (5.0 AVG) against the Saints on Nov. 27, Mason had eight carries for 51 rushing yards (6.4 AVG) against the Miami Dolphins this Sunday. Though he’s barely played this season, Mason is earning more carries out of the San Francisco backfield due to his efficiency rushing the ball. He is available from waivers in approximately 85% of fantasy football leagues at the moment. If you own McCaffrey, it may not be a bad idea to add Mason as an insurance play.

Cam Akers’ season has been a rough one. He’s had issues on and off the field for the Rams, who as a team have been one of the biggest disappointments this 2022 season. After playing terribly in September and sending his fantasy owners into a state of panic in the first few weeks of the season, Akers missed most of October due to off-the-field issues. He had eight carries for 13 rushing yards (1.6 AVG) against the 49ers on Oct. 3, and 13 carries for 33 rushing yards (2.5 AVG) against the Cowboys in the following contest. He returned to the Rams on Nov. 6 for another rough game. However, Akers has been solid over his last three contests beginning with the Rams’ Nov. 20 contest against the Saints. In that game, Akers had 14 carries for 61 rushing yards. He had a decent game against the Chiefs on Nov. 27, and finally had a breakout game this Sunday against the Dolphins. Akers had 17 carries for 60 yards and two rushing touchdowns in the Rams’ 27-23 loss to the Seahawks this Sunday. Akers has seen a slight uptick in production ever since the Rams waived Darrell Henderson. While he’s broken the hearts of fantasy owners (many of whom dropped him from their rosters weeks ago), Akers is now available to claim from waivers in more than 35% of fantasy football leagues at a time when the struggling Rams have restored his role as the team’s top running back.

Over the last few weeks, Dolphins’ WR Trent Sherfield has seen a more active role as a passing target for Tua Tagovailoa. Part of the reason for this comes as a result of Jaylen Waddle’s production which has taken a dip as he continues to recover and play through a leg injury. Over the last three games, Sherfield has combined for seven catches, 171 receiving yards, and two touchdowns. He’s a deep threat downfield, which he showcased on Sunday as he caught one pass for 75 yards and found the end zone. In his fifth NFL season out of Vanderbilt, the 26-year-old wideout has produced 355 receiving yards and two touchdowns this season. The majority of his production this season has come over the last three games. As Waddle continues to play through his leg injury, Sherfield could continue to be a prime passing target for Tua at least over the next few weeks. At the moment, he is available from waivers in virtually every fantasy football league.

Rookie wideout Jahan Dotson has had some red-hot games and some ice-cold ones this season. After only being targeted once and failing to make a catch against the Falcons last week, Dotson caught five-of-nine passes from Taylor Heinicke for 54 receiving yards and the game-tying touchdown in the Commanders Week 13 20-20 OT tie against the New York Giants this Sunday. While Dotson has produced just 233 receiving yards this season, he’s tallied five touchdowns for the Commanders. The No. 16 overall pick out of Penn State in the 2022 NFL Draft is coming off of a great game. His five touchdowns this season outweigh his relatively low-yard production. As the Commanders look to remain undefeated for a fifth consecutive game in Week 14, Dotson could see the end zone multiple times over the next few weeks. Right now, he is available from waivers in approximately 70% of fantasy football leagues. While his inconsistency and lack of yardage is a concern, Dotson could easily be added to the bench of any fantasy football roster right now.

Nico Collins has been targeted heavily over the last few weeks. Although the Texans refused to trade Brandin Cooks away, he’s currently sidelined and Collins has emerged as Houston’s WR1 over that time. Cooks could return in Week 14 but Collins should remain Houston’s top wideout. Over the last four games, Nico Collins has been targeted 38 times. Through this stretch he’s combined for 19 catches, 176 receiving yards, and his only two touchdowns of the season. As the struggling Texans look forward to end of a brutal season, Collins has been trending upwards and is now competing with Brandin Cooks for more targets per game.

Isaiah McKenzie has produced relatively big numbers over the last two games. He had six catches for 96 yards and one touchdown in a 28-25 victory over the Lions on Thanksgiving day. He followed that up going five-of-five on targets for 44 receiving yards against the Patriots in Week 13. For a guy who is available as a free agent in more than 60% of leagues at the moment, fantasy owners should seriously consider adding him to their bench. McKenzie is a PPR gem and is absolutely worthy of a roster spot with Josh Allen throwing him the rock.

Michael Gallup is another wide receiver who’s seen his role expand over the last few weeks. He had five catches for 63 receiving yards against the Giants on turkey day, and followed that up with four catches for 23 yards and two touchdowns against the Indianapolis Colts in a 54-19 blowout victory on Sunday night. While Gallup is a backup wideout for the Cowboys, he’s clearly a sneaky target who Dak Prescott has been looking for more frequently as of late. In fact, Gallup’s production has increased since Dak returned to the Cowboys. The two have played together for years, and Dak’s return at QB has certainly benefited Gallup’s production. Especially after his two touchdowns on Sunday, Gallup is a receiver you could claim from waivers and even consider starting as a flex in Week 14.