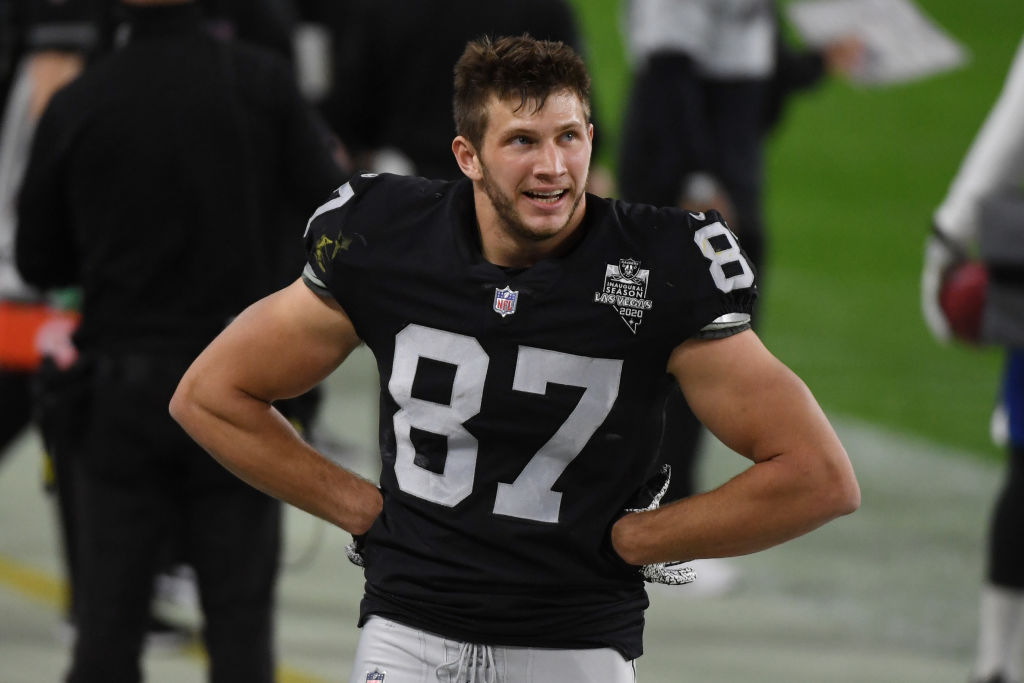 Tight end is the most shallow position in fantasy football, which is why many fantasy owners stream at the position with the fewest trustworthy options. Many highly-touted players heading into the season have been severely disappointing. Players such as Kyle Pitts, T.J. Hockenson, Logan Thomas, and Dallas Goedert have failed to live up to expectations. And now superstar tight end Darren Waller is sidelined, limiting the number of startable players at the position even more. Fortunately, the four teams on bye this week (Green Bay Packers, Cleveland Browns, Carolina Panthers, and Tennessee Titans) all lack tight ends with any value. Still, it can be incredibly difficult to pinpoint potential streaming options at tight end, and it’s even tougher now that Dan Arnold suffered a season-ending injury.

However, we have a few ideas for those of you who are desperate for a win this week and lack a decent starting option. In the penultimate week of the fantasy football regular season, streaming the right tight end could be the difference between making and missing the postseason. Let’s take a look at Week 13’s top tight end streaming options.

Darren Waller suffered a knee injury early on Thanksgiving that knocked him out of the Raiders’ 36-33 overtime victory over the Dallas Cowboys. Although Waller reportedly avoided serious damage, he won’t be available for Vegas’ Week 13 matchup with Washington.

Washington is stout against the run but struggles at defending the pass. Washington allows the fifth-most passing yards (277) per game. With Waller out of action and Bryan Edwards struggling to do much of anything, Moreau could be a focal point of Vegas’ aerial attack in Week 13. Although Moreau only caught one pass after Waller exited Week 12’s matchup, he did see five targets from quarterback Derek Carr. When Waller missed Week 7, Moreau filled in admirably, producing six receptions for 60 yards and a touchdown. You don’t usually find a player with TE1 upside on the waiver wire, but Moreau is this week’s top streaming option at the position.

Use our Trade Analyzer to find out who gets the better end of any fantasy football deal!

Thomas has produced top-five numbers at the position earlier in his career but has barely been healthy enough to suit up this season. Thomas scored two touchdowns in his first three games this season before suffering an injury that kept him out for two months. In his first game back, Thomas caught three receptions on six targets for 31 yards against the Seattle Seahawks. This week, Washington faces a Las Vegas defense that allows the second-most fantasy points per game to opposing tight ends. Thomas probably shouldn’t be available on the waiver wire, but some fantasy owners may have dropped him during his seven-week absence on Injured Reserve. If he’s available, pick him up immediately and start him in the juicy matchup. Outside of Terry McLaurin, Thomas is probably the most talented pass-catcher on Washington’s roster.

With Andy Dalton starting for Justin Fields on Thanksgiving, Kmet led the team in targets (11), receptions (eight), and was second in receiving yards (65). The second-year tight end is much more valuable when the “Red Rifle” is under center rather than Fields. That said, even when the rookie signal-caller has been on the field, Kmet has been third in targets (23), receptions (38), receiving yards (242), and air yards (387). No matter who starts Week 13’s matchup against the Arizona Cardinals, Kmet should be in consideration for fantasy owners looking for a tight end to plug into their lineup. In two of his last three games, Kmet has tallied 14+ fantasy points in PPR formats. Although he started the season slowly, Kmet has averaged 4.5 receptions for 46.67 receiving yards on 6.33 targets per game since Week 6. Over that span, he's second on the Bears in routes (180), targets (38), receptions (27), and receiving yards (280) since Week 6. The biggest knock on Kmet is that he has failed to score a touchdown this season. That may not change in Week 13 as the Bears face an Arizona Cardinals defense that has only allowed one touchdown to opposing tight ends and the second-fewest fantasy points per game to the position. However, with Allen Robinson looking highly questionable to suit up, Kmet would slot in as the second option in Chicago’s passing game behind wideout Darnell Mooney. Don’t be surprised if Kmet produced double-digit fantasy points despite a difficult matchup. Chicago should be playing from behind, which means the sophomore tight end should see plenty of targets.

Since hauling in three receptions for 91 yards and two touchdowns against the Baltimore Ravens in Week 6, Uzomah has been an afterthought in Cincinnati’s aerial attack. Joe Burrow has been locked in on wide receivers Ja’Marr Chase and Tee Higgins. In his last four games, Uzomah has just 13 receptions for 75 yards and zero touchdowns. However, Uzomah and the Bengals get a matchup against a Los Angeles Chargers defense that has been generous to opposing tight ends. The Chargers have allowed more touchdowns than any other team to the position and the fifth-most fantasy points per game to tight ends. While Uzomah is a boom-or-bust option, he could be worth a roll of the dice if you are desperate at the position.