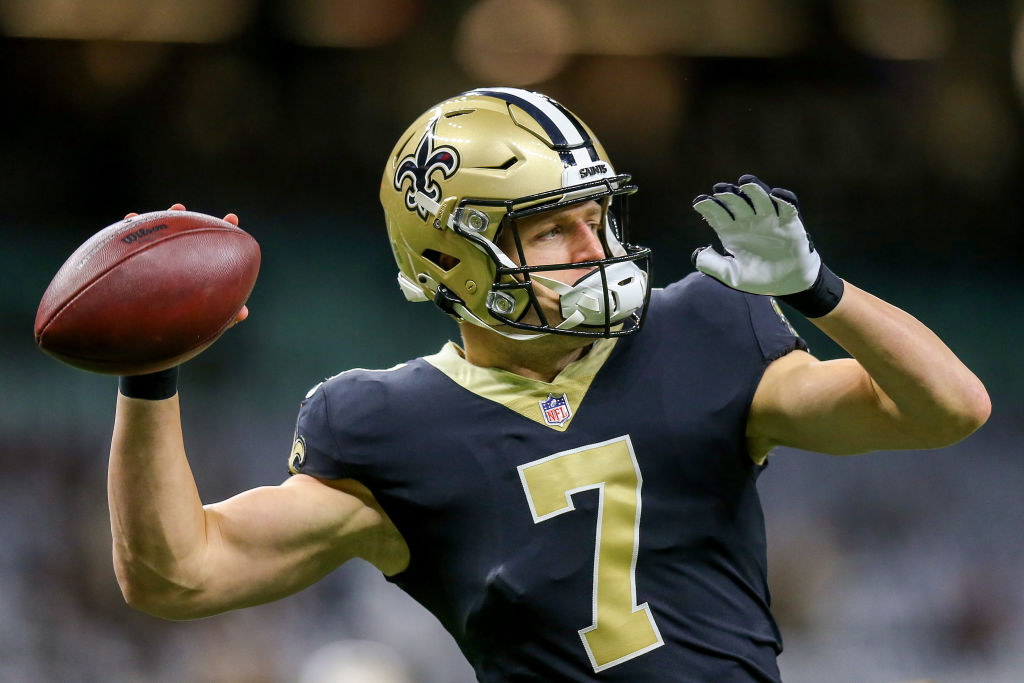 Streaming quarterbacks has become an acceptable strategy in the world of fantasy football. Although four teams are on bye this week (Green Bay, Tennessee, Cleveland, and Carolina), fantasy owners will likely only need to find a replacement for Aaron Rodgers and Ryan Tannehill. If you have been starting Baker Mayfield or Cam Newton, things haven’t been going your way recently.

For this article, we are going to focus on players who are owned in fewer leagues and who we know are starting in Week 13. There are not a lot of trustworthy options at the quarterback position this week, so you might have to take a gamble that you aren’t quite comfortable with.

So with that, let’s take a look at a few potential options to stream at the quarterback position in Week 13.

Hill has been taking first-team reps this week and finally looks healthy enough to return to game action. Sean Payton has committed a ton of money to Hill, so now that he is close to full strength, he should start Thursday against a Dallas Cowboys defense that allows the fourth-most passing yards per game to quarterbacks. Dallas is also tied for the third-most rushing touchdowns allowed to opposing signal-callers. During a four-game stint as a starter last season, Hill scored 28.6, 20.3, 27.9, and 25.9 fantasy points — all great fantasy performances. Hill has massive upside due to his ability to run the ball and score in the end zone, and he will also likely be playing from behind, meaning he’ll need to sling the ball to keep up with Dak Prescott and the Cowboys. The Saints have mediocre-at-best receiving options, but Alvin Kamara and Mark Ingram are returning this week, which could open up holes for Hill to accumulate yards on the ground. Although the Dallas Cowboys have some elite playmakers in Defensive Rookie of the Year candidate Micah Parsons, as well as cornerback Trevon Diggs, their secondary is definitely beatable. The Cowboys are allowing almost 370 total yards of offense per game and are the 26th-ranked defense in the league. Hill has top-five upside in Week 13 against a Dallas team that just allowed Derek Carr to post 36 points without tight end Darren Waller for much of the game. If you need to replace Aaron Rodgers or Ryan Tannehill in Week 13, Taysom Hill could be your man.

After winning four consecutive games, the Dolphins are back in the AFC playoff picture. While the team’s chances of actually securing a Wild Card spot are slim, Tua has all the motivation in the world to dominate the G-Men in Week 13. New York has played well on defense as of late, but Tagovailoa has averaged 20.2 fantasy points per game since Week 6. Over that span, he has completed an insane 73% of his passes. Although Tua has had less than 2.5 seconds to throw on 56.3% of his dropbacks, he faces a Giants defense front that ranks dead-last in defensive pass-rush win rate. The chemistry that Tagovailoa has established with Jaylen Waddle, plus the reliability of tight end Mike Gesicki down the middle, and even the potential return of DeVante Parker make Tagovailoa one of the top streaming options at the quarterback position in Week 13. In his last two starts, Tags has eclipsed 500 passing yards and thrown three touchdowns compared to just one interception. The Dolphins are on a roll and there is no reason to expect that to change against the 4-7 Giants.

Heinicke has far exceeded expectations after Ryan Fitzpatrick went down early in the season. He even led Washington to a massive upset over the Tampa Bay Buccaneers in Week 10, followed by a three-touchdown performance against the Panthers in Week 11. Heinicke gets a Las Vegas Raiders defense that is currently allowing the seventh-most fantasy points per game to opposing quarterbacks. Vegas allows the seventh-most passing touchdowns and the ninth-most rushing yards per game to quarterbacks (21). From Week 2 to Week 11, Heinicke has averaged 20.5 fantasy points per game in his starts. The fact that Washington struggles against mobile quarterbacks is also a huge advantage, as Heinicke tallied 95 rushing yards against the Green Bay Packers in Week 7. He’s much more mobile than you think. He is a solid streaming option due to the matchup and his ability to accumulate fantasy points with both his legs and his arm.

Struggling to figure out who to start this week? Utilize FantasySP’s Start / Sit Tool to find out which player has a better chance at success to help you win your fantasy football matchup!

If you are really desperate, Matty Ice could be an option when the Falcons host the reigning Super Bowl champs as 11-point underdogs. Ryan has put up complete duds in four of his last five games. However, he faces a Tampa Bay Buccaneers defense that is completely ravaged. The Bucs were already playing without two of their top three cornerbacks, but things for worse in Week 12 when they lost Jamel Dean.  The Buccaneers have an extremely stout rushing defense, and considering the Falcons are such heavy underdogs, Ryan will have to sling the ball early and often. If you study the tape from Week 12, you will see how exploitable that Buccaneers secondary really is, as Carson Wentz torched them for 306 passing yards and three touchdowns without much production from top-tier talent Michael Pittman. I’m not expecting a 25-point performance, but I do think that Ryan is a diamond in the rough this week. Despite the absence of Calvin Ridley, Russell Gage has shown signs of improvement and Arthur Smith will find a way to get tight end Kyle Pitts more involved. If you really need a quarterback, Ryan should be good for about 18 fantasy points in Week 13.