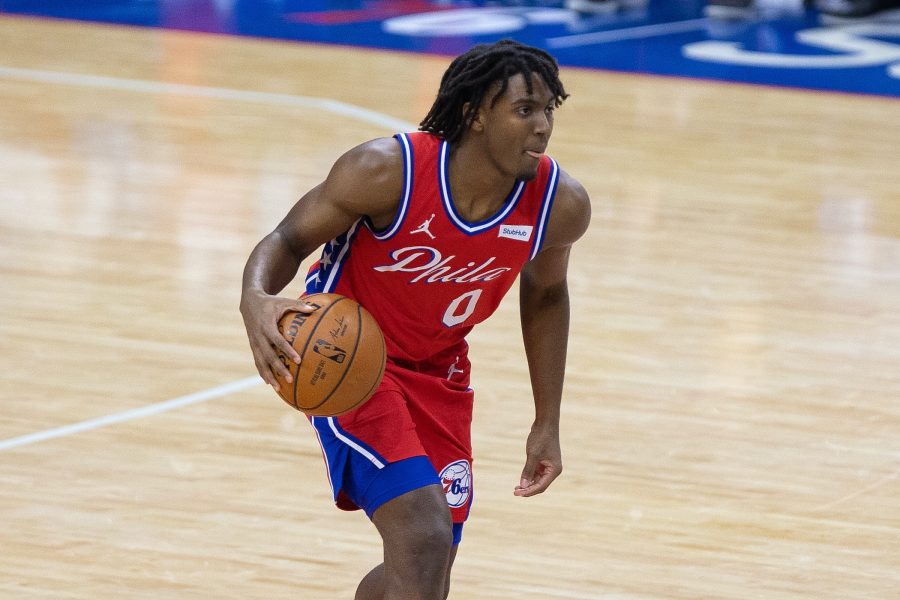 Although we are just midway through Week 6 of the fantasy basketball season, countless players on various teams have recently suffered significant injuries. This includes Detroit Pistons guard Cade Cunningham, who may have suffered a fracture in his lower leg and PG Tyrese Maxey of the Philadelphia 76ers, who suffered a foot fracture 21 minutes into their game against the Bucks.

Multiple star players sustained significant injuries over the last week or so. Damian Lillard of the Blazers strained his calf. In addition, the 2022 No. 1 overall pick, Paolo Banchero, has missed a handful of games after sustaining an ankle injury. Nonetheless, he, like Lillard, is expected to return to action sooner rather than later.

Let’s take a look at all of the new NBA injuries sustained to key fantasy basketball players over the last week, and then check in on the status of signifcant players who are still weeks to months away from making a 2022-23 NBA season debut. Let’s dive in.

Tyerese Maxey is expected to miss at least three-to-four weeks after sustaining a severe injury to his left foot against the Bucks on Nov. 18. It was reported this weekend that this injury was actually a foot fracture he sustained 21 minutes into the game. To give you an idea of how well Maxey has been playing this year, he produced 24 points (9-12 FG), four rebounds, five assists, and one block in just 21 minutes on the floor before going down.

Maxey has averaged 36.4 minutes per game through 15 contests played in this season. The Kentucky guard has averaged 22.9 PPG (46.2 FG%), 3.5 rebounds, 4.4 assists, and one steal per game this season. While he won’t miss more than one month, Maxey has been an instrumental part of the 76ers' success this season, especially since losing James Harden earlier this year. Right now, the 76ers are without their two best guards, which will open up the floor for De’Anthony Melton and Shake Milton over the next few weeks. The 76ers are banged up so starting Philly's depth players over the next few weeks makes sense.

Ja Morant suffered a Grade 1 ankle sprain late in Memphis’ matchup against the OKC Thunder on Friday night. The Grizzlies listed Morant as “Doubtful” ahead of tonight's game against the Sacramento Kings.

While the Grizzlies will be without Morant for the time being, he should be considered week-to-week. We’ll have to wait and hear more from the Grizzlies’ camp before suggesting any specific timetable for Morant’s return. Nonetheless, Morant was listed as “Doubtful” and not “Out” ahead of tonight’s game, which means the superstar point guard could be coming back very shortly.

Damian Lillard suffered a calf strain on Saturday. The injury was reported to be a Grade 1 strain meaning that Lillard will be out for a little while. The Blazers already reported this week that they wouldn’t re-evaluate Dame until at least next week.

The Blazers have been great this season. Despite Lillard being on-and-off the court so far in 2022-23, he’s played a crucial role in the team's success this season. Fortunately, the addition of PF Jerami Grant and the emergence of SG Anfernee Simons as a prolific scorer make it safer for Lillard to be out for a few ganes. While Lillard is expected to miss at least another week, expect the Blazers to keep up their winning pace and for scorers like Simons to step up big time.

Cavs’ shooting guard Caris LeVert left their game against the Miami Heat with an ankle injury and did not return in the second half. LeVert essentially rolled his ankle on Heat forward Caleb Martin. Fortunately, LeVert’s injury doesn't seem to be a severe sprain whatsoever. While he was sidelined for Monday’s game, Cleveland was likely just being cautious. LeVert should be suited up and ready to go in any of the next few games.

Second-year Detroit guard Cade Cunningham has been out for the Pistons’ last six games. In the 12 games he has played so far in 2022, Cunningham was averaging 19.9 PPG, 6.2 rebounds, and 6.0 assists in 33.3 minutes per game. It was reported yesterday that Cunningham could have suffered a fracture in his lower leg which could keep him out for the remainder of the 2022-23 NBA season. This would be a significant blow to the young Pistons. Expect Jayden Ivey and Killian Hayes to step up in Cunningham's absence.

Detroit big man Isaiah Stewart will be out for another two-to-four weeks after spraining his toe. There is concern that he may have sustained a stress fracture which would make matters worse in regards to a timetable for a potential return.

Tyler Herro missed his eighth straight game last night to an ankle injury he sustained on Nov. 4. He is considered to be DTD at the moment. What makes matters difficult is the fact that Jimmy Butler is sidelined as well at the moment.

Jimmy Butler has missed Miami's last three games (including Monday night, Nov. 21) due to a knee injury. It was reported this weekend that Butler would remain sidelined for the last two games of the Heat’s four-game road trip which is why he did not suit up against the Timberwolves last night. It remains unclear whether or not Butler will be able to suit up as Miami returns home to face the Wizards on Wednesday night.

This year’s No. 1 pick has been playing tremendous basketball for the Magic in his debut NBA season. Despite missing a handful of games as a result, Banchero is expected to return to Orlando's active roster imminently. He should be considered DTD at the moment. Banchero has been an absolute monster on the court this season. In 11 games played for Orlando in his rookie season, the Italian-American Duke product has averaged 23.5 PPG (46.1 FG%), 8.3 rebounds, 3.6 assists, and nearly one block per game in 34.6 MPG played each night. Banchero’s injury doesn’t seem to be too severe. As a result, he should be getting back to the action very soon. This further gives fantasy basketball enthusiasts (DFS especially) a reason to pull the trigger on PF Franz Wagner for the time being.

Bradley Beal was essentially charlie-horsed this weekend. As a result, he is currently listed as questionable with an injury to his quad.

About one week ago, the Bucks sent star SG Khris Middleton to their G-League affiliate in order for the sharp-shooter to get some solid reps in as he continues to recover from the wrist injury in last year’s playoffs which caused him to miss 10 games of the Bucks’ 2021-22 postseason run. Middleton was sent to the Wisconsin Herd earlier in November but was then recalled by the Bucks. It was announced today that Middleton, alongside Wesley Matthews, were both assigned to the G-League Wisconsin Herd. Middleton is on his way back, but could still be weeks away from a return. He is playing contact basketball and getting ready to rejoin the cruising Milwaukee Bucks as they try to keep control over the East throughout this Winter.

The Bucks’ indicated this weekend that they expect Joe Ingles to be ready to make a January season debut for his new team. While he is still months away from getting back into action, once he does get healthy, other wings who are seeing big minutes right now (Jevon Carter) will likely lose their share of minutes per game once the Aussie gets back into the action.

Last Wednesday, Anthony was included in shooting drills with the rest of the team. It seems likely that he will remain out until after Thanksgiving taking into consideration that he hasn’t suited up since October 26 and is yet to see full-contact practice with his Magic teammates. Orlando is dealing with injuries to other players. Jalen Suggs is the team’s best available guard at the moment. He scored 12 points (5-13 FG) and produced two rebounds, four assists, and four steals in 24 minutes against the Indiana Pacers on Monday night. Orlando’s corps of guards has taken a big hit. In addition to Anthony being out, Markelle Fultz is still far away from seeing some NBA action again this season. While Suggs is the Magic’s best available guard right now, expect for PF Franz Wagner to take a more active role in moving the ball across the floor and having a more active role on offense. Wagner scored 20 points (6-11 FG) and had six rebounds, three assists, and one steal in 31 minutes on the floor. SG RJ Hampton also had a decent game Monday night. Although he only scored six points on two-of-seven shooting from the field, he led the Magic in passing with five assists and also produced two rebounds and one steal in the contest. Regardless, Orlando’s corps of guards is severely depleted. Until Anthony comes back, Suggs should start. Nonetheless, he only played 24 minutes on Monday night. Three other guards (RJ Hampton, Terrence Ross, and Garry Harris) all played 21 minutes or more in the contest. While the Magic look for answers at the point, they have a long list of shooting guards who can help their backcourt while Cole Anthony, and maybe Markell Fultz, return from injury this season.

On November 2, James Harden suffered a tendon strain in his right foot in a loss to the Wizards. Though he played through his injury and finished with 35 minutes in the game, the Nets said late last week that they wouldn’t re-evaluate Harden for at least another two weeks. Sources showed Harden moving on the treadmill the other day, indicating that he is nearing a return to the 76ers lineup.

This will make the last couple weeks of November difficult for the 76ers depleted backcourt. Philadelphia will also be without Tyrese Maxey for three-to-four weeks as a result of a fracture sustained to his left foot on Friday night against the Milwaukee Bucks. At the moment, the 76ers best two guards are De’Anthony Melton and Shake Milton. Both players have been efficient off of the bench this season, but haven’t gotten consistent starter minutes (naturally) to kick off the season. With Harden and Maxey out of the mix, expect Milton, and especially Melton, to erupt for some huge nights of fantasy production in the weeks to come. Philly’s starting guards are still weeks away from returning to the lineup.