As we dive into Week 5 of the NBA regular season, deciphering which players are worth trading for or away can become tricky. The fluctuation in players’ trade values is becoming less evident to decipher. This week, we’ll take a look at some of the players you should target over others. Young guards like Jordan Poole and Tyrese Haliburton are examples of players whose trade value dipped over the last week bringing their trade values below players who are simply not as fantasy efficient. The undervalued wings this week are Khris Middleton, who will be returning from COVID-19 protocols this week, and Nassir Little, who is starting to take Robert Covington’s minutes. Veteran Nikola Vuscevic is also returning from COVID-19 protocols and will be highly motivated to improve his underwhelming efficiency on the floor in order to contribute to the cruising Chicago Bulls offense. 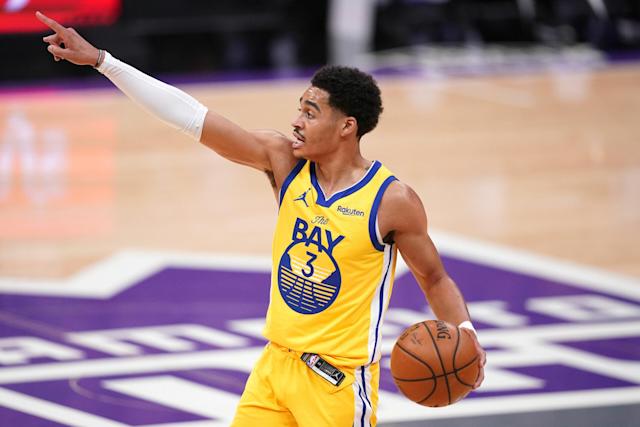 Jordan Poole is averaging 17.5 points in less than 30 minutes played per game this season. He is off to a hot start and was particularly on fire in the first few games the Warriors played in November. In three games played between Nov. 3 and Nov. 7, Poole scored a minimum of 26 points in each contest, converting at least 52.4% of his shots taken (Poole went 11-for-21 on Nov. 3). Still, his value dipped by -1.0 points over the last week because he had some less efficient games last week. On Nov 8, Poole shot 6-of-17 from the field, and on Nov. 10, he only converted five of his 17 shots taken. Poole’s value dropped solely because he was not as efficient on the floor over the last four games the Warriors have played as opposed to his production in the three games he played between Nov. 3 and Nov. 7. His value sits at 14.66 right now, which is perhaps more of a reason why he is a good buy-low candidate. Consider trading someone like Reggie Jackson (15.55) or Kemba Walker (15.63) to acquire Poole. Both Jackson and Walker are players who have been unpredictable since the beginning of the season, specifically because the quantity of minutes they receive per game is unpredictable. With Eric Bledsoe and Derrick Rose respectively playing alongside them, Jackson and Walker don’t offer a guaranteed 30 minutes per game or anywhere near 17 points per game. In contrast, Poole has started all 13 games the Warriors have played this season, playing a minimum of 28 minutes over the last two weeks. He’s also only missed one free throw all season, explaining why his conversion rate for the season is a whopping 96%. Poole is more consistent, more efficient, and less of a liability than multiple guards valued higher than him (Walker and Jackson). I think he is greatly undervalued at the moment and is worth trading for. 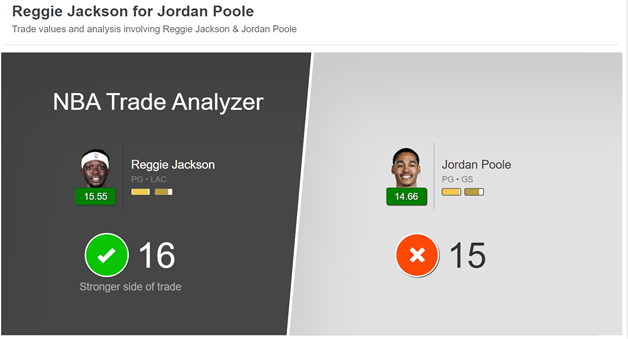 Tyrese Haliburton’s trade value dropped by -0.6 points over the last week, solely because he missed two games, and returned on Nov. 12 to score eight points in 34 minutes. The trade value chart is overreacting with this valuation. In that “off” game, he also recorded seven assists, eight rebounds, and one block. Right now, Haliburton rests at a trade value of 18.65, though he is averaging 33 MPG and has started all 12 games he’s played in this season. Because Haliburton starts alongside Buddy Hield and De’Aron Fox, you can be certain that he will play 30 minutes or more when healthy. Haliburton was in the mix last season for Rookie of the Year honors and simply hasn’t gotten going yet. The Kings will continue to give him big minutes this season. He missed two games and had one bad game back. This is why his value has dropped over the last week (on the rise again), and this is why you should pursue him right now.

The only reason why Khris Middleton’s value has dropped in recent weeks has been because he’s been sick, not because he can’t score or produce fantasy points. Without Middleton, there is no chance the Bucks would have even made it to the NBA Finals last season. He is the best scorer on the team and has truly been one of the most improved players in the NBA over the last few seasons. Middleton’s trade value sank by -1.6 points over the last week, which has brought his value near a season-low 19.27. OG Anunoby (20.15) and Jerami Grant (19.38) have higher trade values but simply aren’t yet capable of producing as much offense as Middleton. His value is this low because he has only played six games this season, averaging 20 points (20.4 PPG last season) on 43.5% shooting from the field. His current three-point percentage sits at a rough 25.7% (only six games, but still..), almost 15.0 percentage points below his 41.4% shooting from beyond the arc over 68 games played last season. Similar to Vucevic, he’s played very mediocrely in the few games he’s started in this season. Upon recovering from COVID-19, no injuries or health concerns suggest Middleton’s performance would fall below the numbers he produced last season. When active and healthy, Middleton is Giannis Antetokoumpo’s Scottie Pippen. Currently valued lower than players like Anunoby and Grant, it seems like the perfect opportunity to buy him at such a low trade value. This is your opportunity to steal Middleton at an outrageously low value.

In Portland, it’s starting to look like Nassir Little’s role in the rotation is significantly increasing. In turn, Robert Covington’s minutes are progressively declining, and so is his level of production. Over the last three games, Little has played between 22 and 29 minutes and tallied between 20 and 38 FPTs in those contests. In contrast, Covington, who generally plays approximately 28-30 MPG, has played between 18 and 23 minutes over the last three games, and scored a maximum of 15 FPTs in those contests. Between Nov. 3 and Nov. 9, the Trail Blazers played four games. Covington played a minimum of 30 MPG while Little played a maximum of 15 MPG during that span. As Portland struggles to find inspiration and motivation this season, it seems like the Trail Blazers are willing to give Little more minutes at the cost of decreasing Covington’s. If this holds true, then Little’s rapidly growing trade value currently sitting at 11.25 could soon match Covington’s current trade value of 13.57. Little is also available on the waiver wire in many fantasy basketball leagues, which won’t be the case soon. In reality, if you were to trade most small forwards with a current trade value between 10.0 and 13.57 (Covington), I think you would be winning if you acquire Little. Portland is stagnating in terms of its long-term development. This means that in the long term, they are better off developing Little rather than giving Covington 30 MPG. Little might be available on your waiver wire, so check there first. But if he is not, try to steal him from an opponent in your fantasy league, and trade away a mediocre small forward.

Vucevic’s trade value decreased by -2.5 points bringing him to a current value of 23.51; his lowest value all season. In contrast, his highest trade value this season was approximately 30-31 points. He is the big man to buy low this week, which is why we’re only going to focus on him. Vucevic shot poorly to kick off the season, and then tested positive for COVID-19 on Nov. 11. Vucevic is a bargain to scoop up right now having fallen below 24.0 points in the trade value charts. Right now, Jarrett Allen (23.77) and Clint Capela (25.02) rank higher in the trade value charts than Vucevic. For instance, Capela is averaging an 11.0 point 11.6 rebound triple-double this season. In 28 games played for the Bulls last season, Vucevic recorded 21.5 points and 11.5 rebounds per game. As soon as he returns (not before Nov. 21), Vucevic will continue to get between 30-35 minutes per and is likely to shoot better than he did in his first few games this season. On Oct. 30, he converted 4-of-19 shots from the field, quite simply an abysmal performance for him. Likewise, he played poorly against the Nets on Nov. 8, going 5-of-14 from the field. He has not scored more than 22 points in a game this season.  At the center position, you simply cannot be shooting 39.5% from the field. Vucevic has averaged 49.4% shooting from the field on his career and has never shot below 45% from the field, which he produced as a rookie in Philadelphia only playing 15.9 points per game. Despite these garbage numbers, I expect his current production of 13.6 PPG and 10.9 REBs to increase. That being said, I think he will score fewer points this season because of Bulls’ offseason pickups in DeMar DeRozan and Lonzo Ball who are better scorers than Vucevic. Nonetheless, the underwhelming numbers Vucevic has produced this season exceed what Capela has produced so far. If Vucevic is able to produce 16 PPG and 11 REBs, thus scoring more than five points per game less than he did last season, trading away a big like Capela in return for Vucevic simply makes sense.