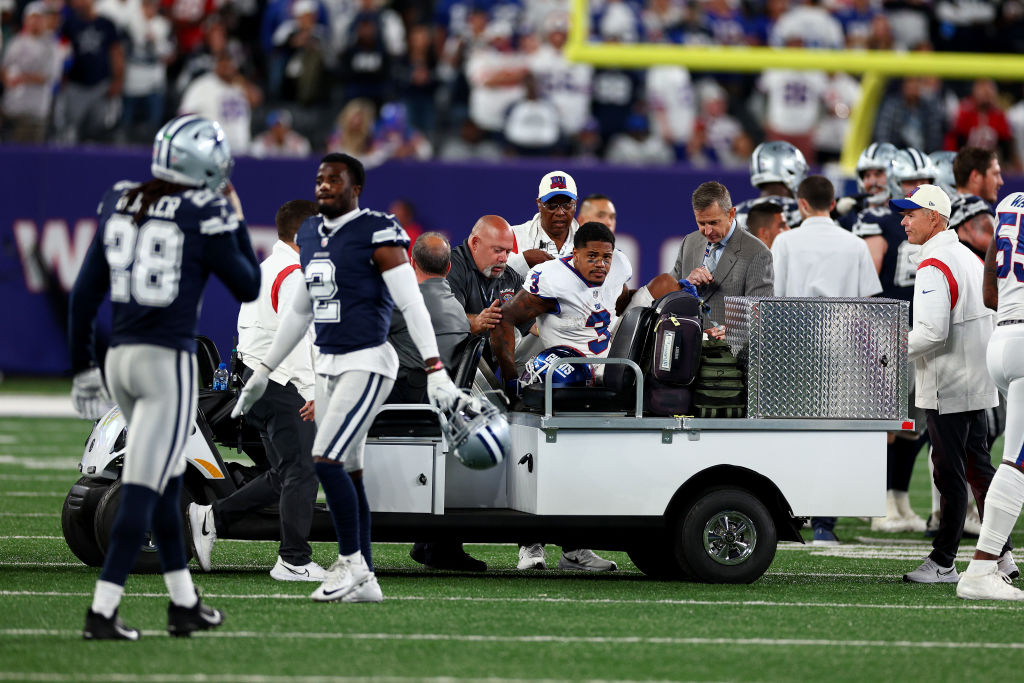 In the last few seconds of the Giants’ Monday Night Football game against the Dallas Cowboys, Sterling Shepard tore his ACL. The injury came from a non-contact play where Shepard could be seen running down the right side of the field unexpectedly collapsing to the ground.

It was interesting to see Odell Beckham Jr. take to twitter and comment on the injury as a player who’s struggled with ACL tears throughout his career. Beckham Jr. stressed that he believed the injury was caused because the Giants play on turf and not on grass, an interesting remark taking into consideration that there was no contact on the play and that Shepard wasn’t running down field at full-speed.

Shepard was off to a solid start this season. Through the first three weeks of the regular season, Shepard had 13 catches for 154 yards (11.8 AVG) and a touchdown. In 2021, injuries limited Shepard to just seven games. In 2020, Shepard only played 12 games and in 2019, he played in 10. The unfortunate truth is that Sterling Shepard’s injuries have been a liability for the Giants for at least the last four consecutive seasons. After playing just three games in 2022, jogging down the field caused him to tear his ACL and end his season.

The Giants are a team that lacks depth at receiver. Naturally, WRs Kadarious Toney and Kenny Golladay should see a sharp increase in targets in the weeks to come. Golladay’s ability to catch a football is truly coming into question this season. He complained to the media after Week 2 for the lack of targets he received only to fail and catch easy targets in Week 3.

Still, Toney and Golladay will not be enough to fill in for Sheppard. The Giants might consider giving more playing time to 5’8’’ rookie WR Wan’Dale Robinson as well. Robinson tallied one receptions for five yards against the Tennessee Titans in Week 1 before suffering a knee injury. Robinson was selected in the third round of the 2022 NFL Draft and could be a godsend for Daniel Jones and Big Blue. Head coach Brian Daboll is really banking on Robinson making an impact in Year 1. Check out his college tape; there’s a lot of reasons to be excited if you are a Giants fan. Richie James, formerly of the San Francisco 49ers, should also continue to see more reps. Surprisingly, he led the G-Men in receptions and yards after the first two weeks of the season. Finally, TE Daniel Bellinger could also see an increased role for the remainder of the season. He had four catches for 40 yards against the Cowboys.

The Giants also have the option to promote either WR Marcus Johnson or Kalil Pimpleton from their practice squad as a result of Shepard’s injury. Pimpleton was a feature player on HBO’s Hard Knocks with the Detroit Lions who was cut by the team but then was quickly offered a position on the Giants’ practice squad.

Another player the Giants might consider bringing back to the active roster is former Wake Forest WR Alex Bachman who was impressive in the preseason. Notably, he had an unbelievable game against the Bengals in the preseason where he caught 11 passes for 122 yards and a pair of touchdowns. While Bachman was cut from the roster ahead of Week 1, the Giants’ might consider giving him a call to bring him back to their practice squad if they relegate Pimpleton and/or Johnson to their active roster.

For the Giants, the loss of Shepard is a tough one. The G-Men were a team that entered the season with a weak receiving corps. Entering the season, PFF had the Giant’s corps of wideouts ranked 22nd of all 32 teams in the league. Naturally, the loss of Shepard complimented by the disappointing play of Kenny Golladay makes the Giants’ ensemble of route-runners even weaker heading into Week 4 than the ranking PFF gave them before the season began.

Daniel Jones is going to see a slight downtick in value as we move forward this season without the most tenured player on the Giants. Unless Kenny Golladay, Kadarius Toney, or Wan’Dale Robinson step up in a huge way, things could get very ugly for Big Blue in 2022. Saquon Barkley is the only must-start on any given Sunday from this Giants squad this season. Next week, the G-Men take on a beatable Chicago Bears franchise. Only time will tell how this offense will adapt to Shepard’s absence.