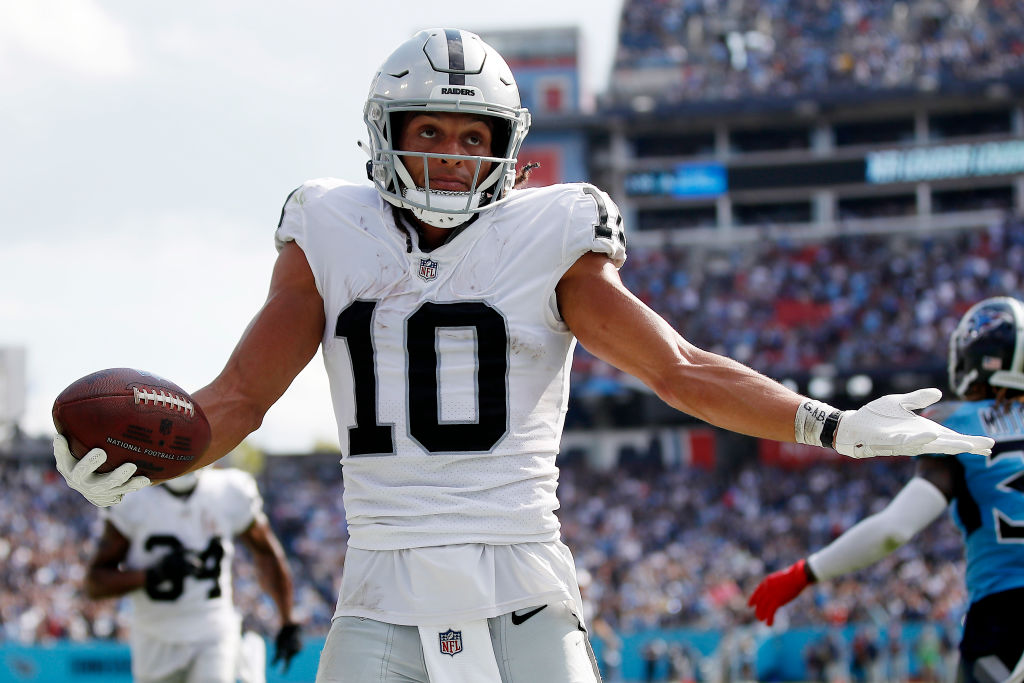 How much of your FAAB budget should you spend on Week 4 waiver wire darlings such as Khalil Herbert and Mack Hollins?

It’s that time of the week to pinpoint the top players on the waiver wire at each of the core four positions heading into Week 4 of the fantasy football season.

I’m not sure how long Mariota will remain free from injury, but for as long as he does, he’s a legitimate dual-threat QB who can put up 20-25 fantasy points each week. With the targets he has in Drake London, Cordarelle Patterson, and Kyle Pitts, and with the lack of defense Atlanta plays, Mariota is an under-the-radar QB to target heading into Week 4. FAAB $20-25

Pete Carroll promised that he would open the offense last week and Geno delivered a solid performance. He’s never one to take too many chances downfield, but he has two excellent receivers to throw to and Seattle should be playing from behind most games. FAAB $5-8

Wilson could be back as soon as Week 4. He showed glimpses of a very good QB last season and if he can build on that late success, there is a good chance he can throw up decent numbers the rest of the way. Garrett Wilson and Elijah Moore are one of the best young duos in the league at the wide receiver position. FAAB $15-20

Winston is still dealing with a back issue, but I love his matchup against Minnesota this week. Watch to see if Michael Thomas plays in Week 4. If he does, Winston might have DFS value on top of seasonal league value. FAAB $25-30

I have been shouting off the rooftops how much I like Herbert and he exploded against Houston when David Montgomery left the game. Montgomery is not guaranteed to play in Week 4. If he doesn’t, Herbert is a must-start. FAAB $80-90 (if Montgomery is out for a few weeks, triple that number)

CEH is overrated. If he didn’t score TDs, he would be a below-average fantasy producer. McKinnon might be the most well-rounded back that Kansas City has on its roster. Stash him on your bench if you can as talent usually wins out in the end. FAAB $40-45

Cordarelle Patterson played brilliantly against Seattle in Week 3, but I still see a pathway for Allgeier to be the lead back for the Falcons before the season ends. He’s not much of a pass catcher, so I like him more in standard and half-point PPR formats. FAAB $100-110

He will be back in the next couple weeks or so and could have an immediate impact. The ultimate stash and cash player. FAAB $30-35 (Will go up as soon as he is activated)

With D’Andre Swift out for the next two games, “Netflix” is the backup to Jamaal Williams and should see about 8-10 touches per game. He runs incredibly hard and rarely gets taken down at first contact. FAAB ($10-15)

Jalen Guyton has been ruled out for the season, which guarantees Palmer being the WR3 for the Chargers. While he’s not the fastest WR around, he has good size and runs solid routes. If Keenan Allen misses more time, Palmer could certainly step up and become a player who can give the team serious production. FAAB $100-120

As many of you may recall Dobbs was the training camp darling for the Packers this season. He was regularly beating veterans in practice making spectacular play after spectacular play. With all the injuries to the Packers receivers, he finally had a chance to start against Tampa Bay and made the most of it. If he could build from that contest and could earn Aaron Rodgers’ trust as a valued wide receiver and have incredibly big upside the rest of the way. FAAB $60-80

Hollins looked amazing in the game against Tennessee this past week. It looks like he has earned the right to be a starter as he seems to have Derek Carr's full trust. I still worry about him sharing targets with a multitude of talented receivers in Las Vegas but he will be on the field and he has a chance to be very successful. FAAB $70-90

Zay has become Trevor Lawrence’s second-favorite target behind Christian Kirk. Jacksonville is much improved under Doug Pederson’s leadership and the team is playing with pace and confidence. Jones could have 4-5 more TDs this season. FAAB $40-50

Sterling Shepard was injured on the last play of the game; Kenny Golladay is awful; and the coaching staff is not a fan of Kadarius Toney. All this means is that Robinson is going to get a chance to produce as soon as he returns from injury. FAAB $65-80

Njoku finally showed how good he could be with that 23-point outing against Pittsburgh last Thursday night. Often fantasy managers forget those Thursday games so there is a slight chance that Njoku flies under the radar. He is not always going to be as good as he was against Pittsburgh, but I easily see four to five more big games this year. FAAB $60-80

Conklin has been a stabilizing force in the Jets’ offense thus far. It remains to be seen how he does with Zack Wilson there, but I am more than willing to risk it considering the lack of skill at the position. FAAB $30-40

Thomas is a humongous target in the red zone and I feel confident that he will return from last year’s injury to catch at least six TDs this season. Worth rostering as a TE2 on most rosters as he continues to build a relationship with Carson Wentz. FAAB $30-40