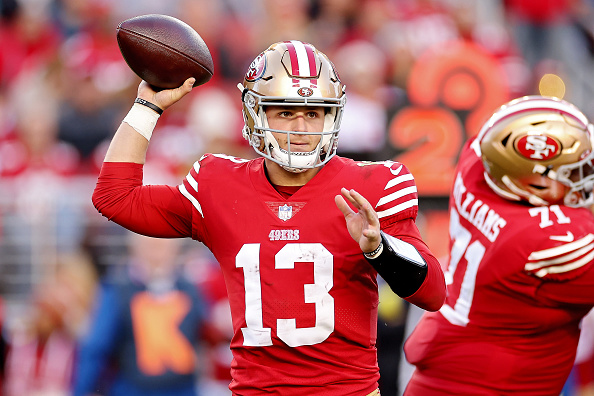 Just a few weeks remain in the NFL regular season and it couldn’t get much harder to find good waiver-wire options at quarterback or tight end. Fortunately, we have you covered. Sam Darnold started for the Panthers last week and will likely remain Carolina’s starting QB after the team announced they were waiving the disappointing Baker Mayfield. For the 49ers, Jimmy Garopollo broke his left foot on Sunday, which left San Francisco with their third-string rookie Brock Purdy. He was able to complete more than 67% of his passes for two touchdowns and help the 49ers beat the Dolphins.

At tight end, Evan Engram of the Jaguars had a solid game on Sunday while Noah Fant and Foster Moreau have consistently produced solid fantasy numbers over the last few weeks.

Let’s dive in and examine the top quarterback and tight ends to target on the waiver wire as we gear up for the final week of the fantasy football regular season.

Jimmy Garoppolo broke his left foot on Sunday which will keep him out for the remainder of the season. This is the second quarterback San Francisco has lost to a season-ending injury this season, after second-year QB Trey Lance suffered an ankle injury in Week 1. Right now, the 49ers are down to third-string QB Brock Purdy. San Francisco selected the former Iowa State QB (2018-2021) with the No. 262 overall pick in the seventh round of this year’s draft. That is the very last pick of the NFL Draft. Although many call the last pick of the draft “Mr. Irrelevant,” Purdy was no such thing this Sunday. After Jimmy G went down, Purdy completed 25-of-37 passes for 210 yards, two touchdowns, and one interception to help the 49ers beat the Miami Dolphins 33-17. Considering the lethal weapons Purdy has at his disposal including CMC, Deebo Samuel, Brandon Aiyuk, and George Kittle, fantasy owners will likely scoop the rookie up swiftly. Still, he is currently available in virtually every single league. If you need a quarterback heading into the final week of the fantasy football regular season, Purdy could be your guy.

In 2022, the quarterback situation in Carolina has been delicate. Baker Mayfield was acquired by the Panthers this offseason but played worse than he did in Cleveland. In fact, the Panthers decided to waiver the former No. 1 overall pick this morning, which will guarantee that Darnold will be the Panthers’ starter for the remainder of the season. Although P.J. Walker started a few games, he will not start over Darnold, who has recovered from injury and is back to full health. The former Jets’ signal-caller started in Week 12 and made his season debut. He completed 57.9% of his passes for 164 yards and one touchdown, ending the game with a respectable rating of 103.8. It looks like the Panthers will be turning to Darnold for the remainder of the season. For that reason, fantasy owners should keep their eye on Darnold who is now available as a free agent in more than 90% of leagues. Although the Panthers no longer have Christian McCaffrey to target out of the backfield, Darnold will have D.J. Moore and rookie Terrace Marshall at his disposal moving forward.

Evan Engram was somewhat quiet through three games played in November. He bounced back in Week 13 for five catches, 30 receiving yards and one touchdown. This season, Engram has produced 42 receptions for 386 yards and two touchdowns. While he isn’t going to produce every week, Engram is producing enough this season (though inconsistently) for fantasy football owners in need of a tight end to consider scooping him from waivers. Engram is battling with Christian Kirk, Zay Jones, and Marvin Jones for targets. However, Trevor Lawrence seems to like his tight end in the red zone, which should only boost Engram’s value moving forward.

Foster Moreau has had at least 30+ receiving yards in each of his last six games. Throughout this stretch, he’s also combined for two touchdowns. This season, Moreau has caught 44 passes for 316 receiving yards and two touchdowns. The majority of his production in 2022 has come through in his last four games. As the Raiders seem to be playing better, expect Moreau’s production to continue. Though Moreau is available in less than 30% of fantasy football leagues at the moment, his consistent production over the last few weeks makes him a safe waiver-wire pickup this week if he’s still available. Moreau’s ceiling isn’t going to be very high, but he should be good for at least a few receptions and 40-50 yards on Thursday Night Football against the Los Angeles Rams this week. And with Derek Carr playing much better as of late, Moreau could easily find the end zone in Week 14.

Noah Fant has had a solid season for the Seahawks serving as a prime passing-target for the resurgent Geno Smith in 2022. He’s gained fantasy value especially over the last few weeks as a result of his production. In the last four games, Fant has combined for 206 receiving yards and one touchdown. He had five catches for 96 receiving yards against the Cardinals on Nov. 6, and four catches for 42 receiving yards and one touchdown to help Seattle beat the Rams 27-23 this Sunday. Fant has had some ups and downs this season, but has consistently produced solid numbers over the last few weeks. He is available in more than 65% of leagues at the moment and is certainly worthy of a roster spot on a tight-end-needy team.