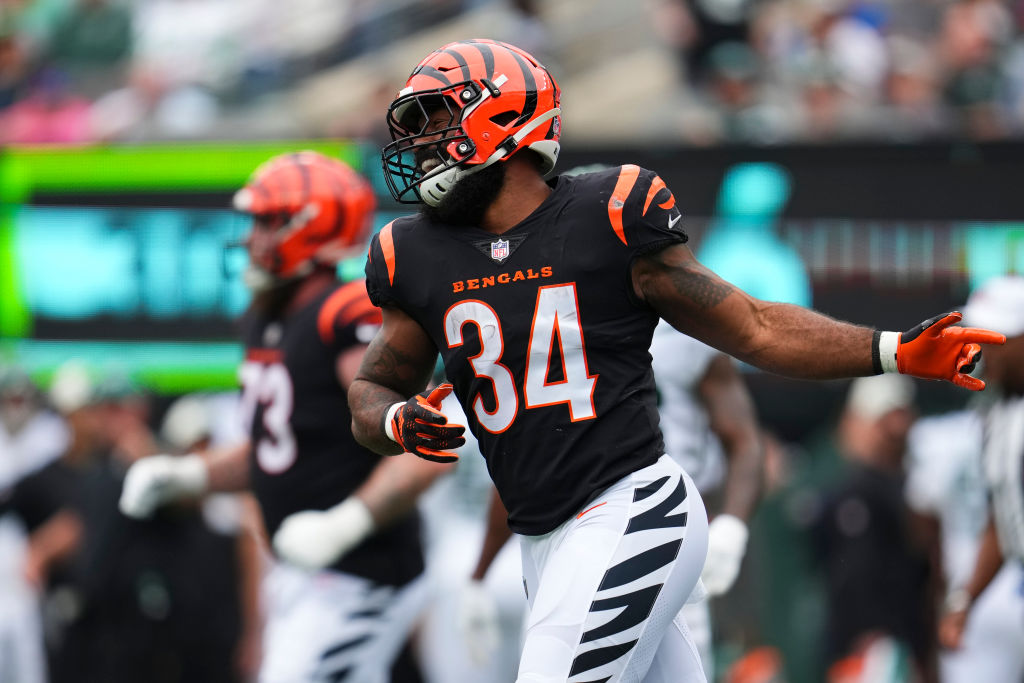 With Week 11 coming to a close tonight, it’s pivotal to find waiver wire gems as we gear up for the final stretch of the 2022 fantasy football regular season. In the wake of Joe Mixon’s concussion, Samaje Perine is the player to target on waivers after scoring three touchdowns against the Pittsburgh Steelers in Cincinnati’s dramatic 37-30 victory on Sunday.

Elsewhere, Treylon Burks" data-toggle="modal" data-target="#player-pop-up" href="/nfl_player_news/Treylon_Burks/">Treylon Burks and DeMarcus Robinson have eached emerged as WR1s for their respective teams. With that in mind, let’s examine the top running backs and wide receivers to target on the waiver wire as we get ready for Week 12!

After Joe Mixon sustained a concussion in Cincinnati’s Week 11 37-30 victory over the Pittsburgh Steelers, Samaje Perine spelled the injured back and performed incredibly well. Perine is someone that fantasy owners have been hoping would break out for many years now. The shifty and versatile halfback finished with 30 rushing yards on 11 attempts and turned four receptions into 52 receiving yards and a whopping three receiving touchdowns! Considering the league’s seriousness about concussions and player safety, it’s hard to envision Mixon suiting up in Week 12 against the Tennessee Titans. Although Tennessee is pretty stingy against the run, they allow a ton of receptions to opposing running backs, which is where Perine shines the most. Perine should draw the start and while I wouldn’t expect another three scores, Perine is a must-start in fantasy as long as Mixon is sidelined.

Lat Murray doesn’t exactly have a huge ceiling but considering he’s Denver’s RB1 at the moment, his floor is higher than many other running backs on the waiver wire. If you need a running back for the final stretch of the fantasy football regular season, Murray may be the ideal target. Since signing with the Broncos, Murray has seen just under 15 5ouches per game. In Denver’s heartbreaking overtime loss to the Raiders yesterday, Murray finished with 49 rushing yards and a touchdown on 17 carries and four receptions for an additional 23 yards. Murray has now found the end zone in three of his five games with the Broncos. Although he is splitting time with Melvin Gordon, Murray outsnapped Gordon in Week 11 and finally ran more routes than Gordon as well. Murray seems to be the 1A in this backfield and if you are desperate, he’s a solid touchdown-dependent option.

When Rashod Bateman suffered a season-ending injury and Mark Andrews was sidelined for a few games, Lamar Jackson had no choice but to find another trustworthy pass catcher. In comes former Kansas City Chiefs wideout DeMarcus Robinson. After producing a season-high 64 receiving yards on six receptions in Week 8 against the Buccaneers, Robinson slowed down in Week 9, finishing with just a single reception for 12 yards. However, following Baltimore’s bye week, Robinson dominated in Week 11. He caught every single one of his nine targets for a new season-high 128 receiving yards. All that was missing was the touchdown but it’s pretty clear that Robinson has earned the trust of signal-caller Lamar Jackson. D-Rob shouldn’t be available on the waiver wire as we gear up for the final postseason push in fantasy football.

The rookie wideout has been a senseason for Tennessee since returning from Injured Reserve. In his last two outings, Burks had demanded 14 targets. In Thursday’s victory over the Green Bay Packers, the rookie hauled in seven-of-eight targets for a career-high 111 receiving yards. Considering the lack of weapons Ryan Tannehill has at his disposal in the passing game, Burks should continue to progress as we enter the final stretch of the fantasy football regular season. If you need a wideout (espeically in PPR formats), don’t sleep on Burks.

With Brandin Cooks back in the mix in Houston, Collins isn’t a must-start but he’s been fairly solid in his second professional season. Houston is almost always playing from behind and these negative game scripts work in Collins’ favor. Over the last two weeks, Collins has hauled in 10 receptions on 17 targets for 97 yards and a touchdown. Collins has flex appeal for the rest of the season.