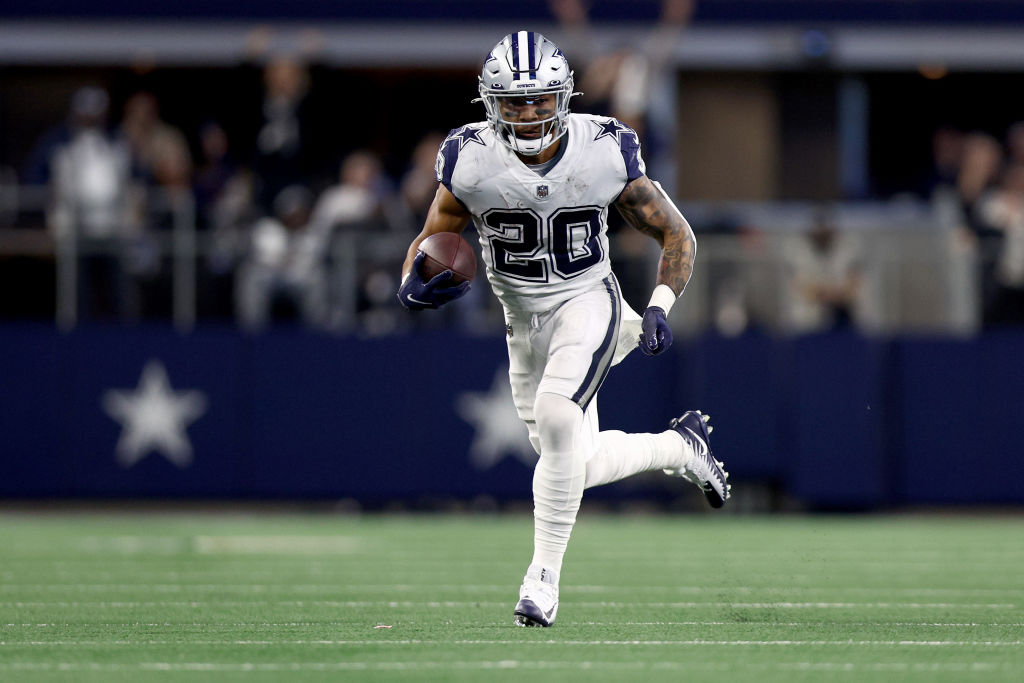 Tony Pollard and Alexander Mattison are some of the top running back handcuffs to target ahead of the 2022 fantasy football season.

No position sustains injuries in the NFL as much as running backs. In fantasy football, it is critical to draft some mid-to-late round running backs who could thrive if the starter on their team goes down. Handcuffs refer to backups at a given position who will likely become the starter if a team’s starter is sidelined. Let’s examine the top RB handcuffs to consider heading into the 2022 fantasy football season.

While Ezekiel Elliott’s production has been in decline for four consecutive seasons, Tony Pollard saw a significant uptick in his numbers last season. In 2021, Pollard rushed for 719 yards averaging a strong 5.5 yards per carry and two touchdowns. He also caught 39 passes for 337 receiving yards last year. Across the board, Pollard had a career season in 2021, while Zeke’s numbers have been in decline since 2019. Though Elliott ran the ball for 1,002 yards last season, he only averaged 4.2 yards per carry. In 2020, he only averaged 4.0 yards per rushing attempt. Simply, Pollard was way more efficient per rushing attempt than Zeke, producing 1.3 more yards per carry than the team’s “star” running back.

I hope to see Pollard play more, but it would be foolish if the Cowboys didn’t give him more carries at the cost of taking some away from Zeke.

Savvy fantasy football owners already know how much upside Mattison has when Dalvin Cook isn’t on the field. Mattison produced 100+ rushing yards in Week 3 and Week 5 last season when filling in for Cook. In each of the three games in which Mattison earned 20+ carries, he rushed for at least 90 yards. Against the Chicago Bears in Week 5 last season, Mattison rushed for 113 yards on 25 carries and caught all seven of his targets for 40 additional receiving yards. Simply put, when Cook isn’t on the field, Mattison has RB1 upside. And Cook has had his fair share of injuries dating back to college.

Dalvin Cook owners will definitely want to protect themselves by drafting Mattison. That way, even if their first-round pick goes down, Mattison can fill in nicely. Mattison is clearly one of the top running back handcuffs to target ahead of the 2022 fantasy football season.

Herbert surprised a lot of folks in his rookie season with the Chicago Bears in 2021. Although David Montgomery began the season as the starter and will start the 2022 season as the workhorse, Herbert filled in nicely when D-Mont was sidelined last year early in the season. In his first start of the season in Week 5, Herbert carried the ball 18 times for 75 yards. The following week, the rookie turned 19 carries into 97 rushing yards and a touchdown against Washington. He also caught two of three targets for 15 additional yards in the passing game. Herbert continued to improve and rushed for 100+ yards for the first and only time of his career in Week 7 against the New England Patriots’ stout defense. He also caught all five of his targets that week for an additional 33 receiving yards. In his final start, before Montgomery returned, Herbert only managed 72 rushing yards despite seeing 23 carries against the Dallas Cowboys. Still, Herbert proved that when Montgomery is injured, he can flourish both in between the tackles and in the short passing game. Expect Herbert to see more opportunities than he did in 2021 as he looks to build on his solid rookie campaign.

Kareem Hunt has done some damage on offense for the Browns despite being a backup option for Nick Chubb. In 2020, Hunt went off for 1,000+ combined yards from scrimmage (841 rushing yards and 304 receiving yards). He finished the season with six rushing touchdowns and five touchdown receptions. Even when Chubb is healthy, it’s clear that Hunt has standalone value given the run-heavy scheme that the Browns employ on offense.

Last season, Hunt was limited to just eight games, but still rushed for 386 and five touchdowns and finished the season with more receptions (22) than Chubb (20). If healthy, Hunt will be used as an offensive swiss army knife for the Browns, who can easily be considered a flex option most weeks. If Chubb goes down, Hunt has RB1 upside in Cleveland even with Deshaun Watson suspended for this first six games of the season.

AJ Dillon blew up in his second NFL season, rushing for 803 yards and five touchdowns along with 313 receiving yards and two touchdown catches. Aaron Jones had 30 fewer rushing attempts in 2021 than he did in 2020, and rushed for less than 800 yards after rushing for approximately 1,100 yards in each of the last two seasons. Jones only had four rushing touchdowns last season. He did however have six receiving touchdowns on his way to 351 receiving yards last season. While Aaron Jones remains the team’s top running back, AJ Dillon is looking promising heading into his third season. His value will raise exponentially if Aaron Jones goes down this season.

The Kansas City Chiefs brought Ronald Jones II on board from Tampa Bay this offseason to serve as the team’s second-best option at running back behind Clyde Edwards-Helaire. However, Edwards-Helaire has been limited in each of his first two seasons due to injury. In his rookie year, he rushed for 803 yards and four touchdowns in addition to 297 receiving yards and one touchdown reception. His season ended against the New Orleans Saints in Week 15 when the 5’8’’ first-year back out of LSU sustained an ankle and hip injury.

After playing 13 games in his first year, Edwards-Helaire only played 10 games in 2021. Last season, he went down with a knee injury in Week 15, which limited his total output. While he could be completely healthy, the Chiefs might be running the ball more through Ronald Jones II to take some of the load off of Edwards-Helaire.

Though he played in 16 games last season, Jones II took a backup role on the team as opposed to 2019 and 2020 when he was the team’s most prominent running back. In 2020 he rushed for 978 yards (5.1 Y/A) and seven touchdowns. The year before that he ran the ball for 724 yards and six rushing touchdowns. He also had 309 receiving yards that season, averaging 10 yards per catch (quite high considering most receptions were on screen passes).

Ronald Jones II can play the position and can be especially effective as a pass catcher for Patrick Mahomes who will be looking for options coming out of the backfield more than in years past especially with Tyreek Hill out of the picture. Expect Ronald Jones II to get a lot of carries and opportunities to catch the ball next season as the team’s second-best option. If Clyde Edwards-Helaire goes down again in 2022 and misses time, you can bet on Jones II is the front runner at the position for the remainder of the season. Regardless, expect Jones to have an important role as the team’s primary backup running back.