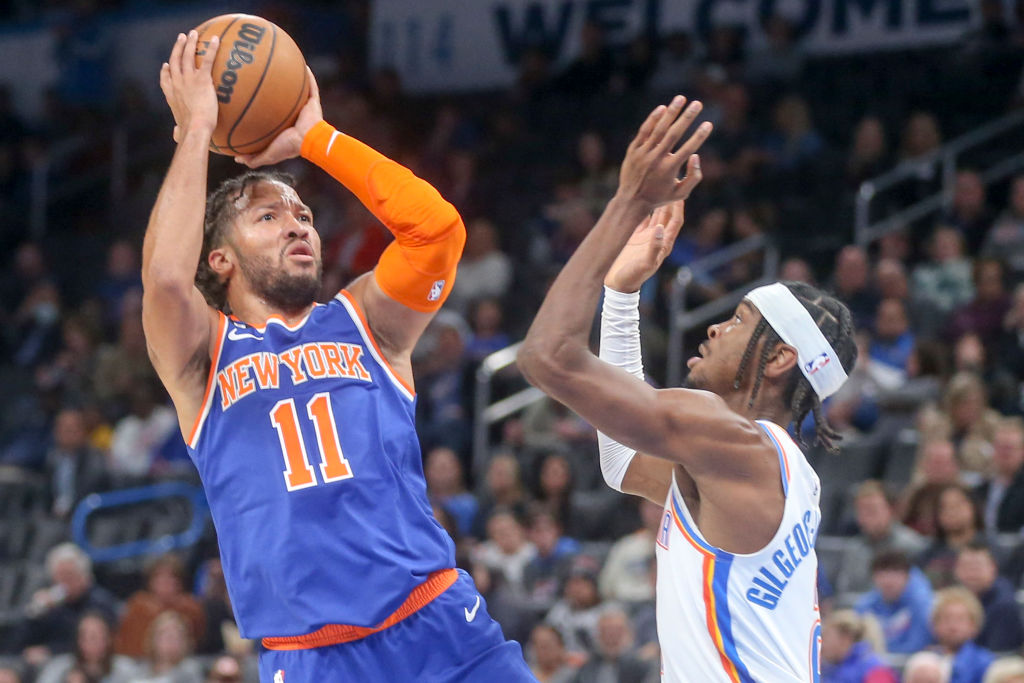 Friday night, NBA fans will be treated to a packed slate of 14 games meaning 28 of 30 NBA teams will be playing the day after Thanksgiving. The Blazers who have lost their last four consecutive games are without Damian Lillard as they head into Madison Square Garden. Later tonight, the 8-10 Warriors will look for a home win as they host an impressive new Utah Jazz team this season that is currently second behind the Phoenix Suns in the Western Conference standings.

Let’s take a look at some of these games and think about which are the best bets of this fully-loaded night of NBA action.

Best Bets of the Night

At 9-9, the New York Knicks are looking much better this season than they did last year. Sometimes the Knicks are on, and other nights they are off. They are a tough team to read at this point as they have gone 4-3 at home and 5-6 on the road this season. Likewise, Portland has gone 4-4 at home and 6-4 on the road this season as they stand at 10-8. As the Knicks look to get above .500, a win tonight against the slumping Blazers is realistic. The Blazers have lost five of their last six games and are right now amidst a four game losing streak. They will be without Damian Lillard as he continues to recover from a calf strain. Expect for the Blazers to add one more loss to their four-game skid tonight in Madison Square Garden against New York. The Knicks have won three of their last five games (victories against Utah, Denver, and Oklahoma City) all of which were on the road. Jalen Brunson has been surging over the last few games. He scored 34 points on a whopping 70.0% shooting from the field against the Thunder on Monday night. In addition, RJ Barrett, who has not been at 100% this season, is finally starting to feel his legs again. He's starting to look great again, and the Knicks desperately need him shooting efficiently. The Knicks should (and they better...) win by five or more points tonight against this slumping Blazers team that will be without Lillard once again.

The Sacramento Kings have been one of the most pleasant surprises of the 2022-23 NBA season. At 14-4, the Boston Celtics have been cruising this season, picking up right where they left off after making it to the NBA finals last season. There are very few negative remarks that can be made about Boston this season, especially taking into consideration that they were forced to fire Ime Udoka before the season began. Jaylen Brown and Jayson Tatum are playing as efficiently as ever. Guys like Grant Williams and Derrick White have been highly impressive as role players for Boston this season. Williams is posting career-highs statistically in every category including minutes and points per game. Sacramento has been impressive this season, especially in their ability to score big each night. Right now, the Kings are the highest scoring team in the NBA, averaging 120 points per game. The second-highest scoring team in the league right now are the Celtics, who are averaging 0.3 PPG less (119.7 PPG) than the Kings. Regardless, Boston should take this home win comfortably in front of their home crowd and treat Celtics’ fans to Thanksgiving seconds against De’Aaron Fox and the Kings this Friday night. Boston looks like the strongest team in the East. The fact that they are essentially tied with the Kings in point production per game could mean that Sacramento’s scoring simply won’t be enough especially as they take on the Celtics on the road.

This offseason, Cleveland added superstar SG Donovan Mitchell to their backcourt. Alongside Darius Garland, the Cavs have potentially the best duo of scoring guards in the NBA this season. While Caris LeVert and Kevin Love will likely sit this one out, the rest of the team is healthy. Right now, the Cavs and the Bucks have virtually even records making Friday’s game particularly important for both teams. Still, the 12-4 Bucks are cruising with a healthy Giannis Antetokoumpo who is averaging 30.1 points per game on 52.0% shooting from the field, 11.6 rebounds, 5.4 assists, 1.1 steals and 1.1 blocks per game this season. With the exception of Khris Middleton who is on his way back from a long recovery period for the wrist he injured last playoffs, Milwaukee is completely healthy. The Bucks and the Cavs have only lost one home game each this season. Nonetheless, the Bucks are still the Bucks. They are also completely healthy while the Cavs will be without both LeVert and Love for this contest which could hurt their ability to score efficiently on the road this Friday. Expect the Bucks to secure a home victory against what remains an impressive Cleveland Cavaliers team in 2022-23.

Despite losing both Rudy Gobert and Donovan Mitchell, the Utah Jazz currently have hold of the second seed in the Western Conference with a 12-7 record. Their corps of young players almost entirely coming from Cleveland’s and Minnesota's 2021-22 rosters have been surprisingly efficient as a team. In contrast, the Warriors have struggled to find consistency this season and have slipped down to the 11th seed in the West with an 8-10 record this year. While the Warriors have been abysmal on the road this season (1-9), they’ve only lost one game at home (7-1). Golden State has one of the most loyal and dedicated fan bases in the league. Opposing teams playing in Oakland will always be at a disadvantage. This applies to this season despite the Warriors’ slow start. They are virtually unbeatable at home. Expect Steph Curry, Klay Thompson, and Draymond Green to remind this young Utah Jazz team who the reigning NBA champs are this Friday night. In addition, Andrew Wiggins is coming off a season-high 31-point game against the Clippers on Wednesday night. If he is able to find his offensive rhythm against the Jazz tonight, the Warriors should easily cover the spread at home.

The Clippers are hurting at the moment. Despite doing just fine in the Western Conference Standings, both Kawhi Leonard and Paul George haven’t been healthy to start off the 2022-23 season. They are both listed as questionable heading into tonight’s game. In contrast, the Nuggets might just be without guard Bones Hyland who is returning from the leagues COVID-19 Health & Safety Protocols. The Clippers have been extremely cautious with Kawhi this season, even though he missed all of 2021-22. So far, he’s averaged 22.4 minutes per game for 10 PPG (42.2 FG%), 4.0 rebounds, and 3.6 assists per contest in just five games played this year. Paul George has played in 16 games for the Clippers and he’s been efficient scoring from the field. He’s producing 23.6 points, 6.0 rebounds, 3.6 assists, and 1.6 steals per game this season. However, George has missed the last two games and will likely be out again this Friday. Without George in the lineup, the Clippers will be shorthanded against a very healthy Denver Nuggets squad this season. While the Clippers could be okay without Kawhi, PG-13 being out will really hurt their chances of defending the home floor tonight against Nikola Jokic and the Denver Nuggets.