Shooters Kevin Huerter and Luke Kennard share the spotlight with big men Thomas Bryant and Daniel Theis as waiver wire targets all available in more than 50% of fantasy leagues. Veterans Jae Crowder and George Hill are also widely available, both playing approximately 30 minutes per game and doing so efficiently. Here are some of the best available players on waivers to consider entering Week 5 of the fantasy basketball season. 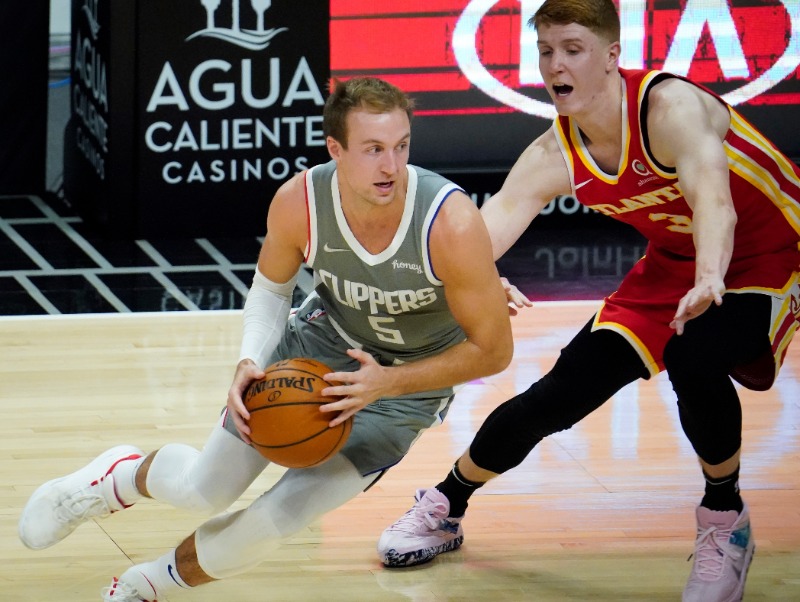 Avoid streaming any member of the Spurs in weekly formats. Since they only have two games this week, you will get more production from even inferior players who are suiting up for four games in Week 5.

George Hill has played a minimum of 32 minutes in the Bucks’ last three games. While that may be because of Kris Middleton’s current absence from the team’s active roster, Hill’s career as an efficient player on different rosters has made him a reliable veteran for the Bucks. At 35 years of age, Hill has experience. He is currently owned by only 25.00% of fantasy basketball teams, up +6.76% over the last week. Even if Hill returns to 20-25 MPG once Middleton recovers from COVID-19, count on him to be a reliable option off Milwaukee’s bench. Someone who may not produce huge numbers, but who you can count on to produce 20 fantasy points per night. His experience makes him someone who is safe to add to your bench and start on your roster on certain nights. Picking him up right now is a safe option.

Huerter signed a huge four-year, $65 million contract in the offseason, which made it very clear that the Hawks plan for the young shooter to be part of the team’s future. With shooter Bogdan Bogdanovic underperforming so far this season and Deandre Hunter out with a sprained wrist, Heurter will play closer to 30 MPG than 20 MPG in the games to come. He’s coming off of a huge performance on Tuesday night where he scored 28 points converting 11 of his 18 field goal attempts. As of today, he is owned by less than 33% of fantasy basketball teams, making him available on two-thirds of all league’s waiver wires. I think he’s an interesting pickup because Bogdanovic has underperformed since the beginning of the season in comparison to how he played at the end of last season and throughout the playoffs for the Hawks. Nate McMillan should give Huerter increased minutes in the rotation moving forward this season because of his current level of production, Bogdanovic’s current level of inefficiency, and because the Hawks front office are focused (and financially committed) to making Huerter a focal piece of their team’s rotation in the years to come.

Averaging 29.6 MPG so far this season, Jae Crowder has maintained the important role he had last year in his first season for the Suns. That being said, the veteran forward is off to a below-average start to the season shooting. He’s currently converting only 38.3% of his field goals and 30.2% of his shots from beyond the arc. Owned by only 37% of fantasy basketball teams, he’s widely available. If he produces just a little more than he is at the moment and maintains close to 30 MPG, he should be on your radar as a strong forward who will produce consistently. He’s well respected in the Suns’ locker room and has established himself as a reliable veteran entering his eleventh season in the NBA.

As a Wake Forest graduate and fan, the most memorable game I remember as a student was the home game against Duke on January 18, 2017. With four minutes left to play in the game, Wake Forest led 81-71 over Duke. Then, Luke Kennard happened. He scored 30 points after the half and scored 12 of Duke’s decisive last 15 points. He went 6-6 from the three-point line and embarrassed the Demon Deacons at home. His transition to the NBA for the most part has been successful. He is still a sharpshooter and has been productive in his last two seasons for the Clippers. What’s particularly appealing is that he’s averaging 6.4 MPG more for the Clippers than he did last season, but is producing with the same efficiency. Right now, he’s scoring 11.9 PPG on 45.1% shooting from the field and 47.5% from the three-point line. He’s been claimed in 37% of fantasy basketball leagues so far this season. With Kennard playing alongside Terrance Mann and Nicolas Batum, the Clippers’ roster is filled with sharpshooters. With Batum largely unavailable on most waiver wires now, Kennard and Mann are the two best available shooters for the Clippers. I am suggesting that Kennard has more experience in the NBA, and offers much more consistency than Mann. Mann, however, showed last season that he can erupt and score 39 points in a game. However, he hasn’t been able to do that so far this season and is only shooting 34.5% from three-point range, scoring 11.1 PPG, and is owned in 63% of leagues in comparison. If I had to pick between Mann and Kennard, I would feel more comfortable with the latter because of his NBA experience so far and his efficiency on the floor.

Bryant is closer and closer to returning to NBA action. In mid-October, it was reported that he was well ahead of schedule in regards to his recovery from a season-ending ACL injury. While he likely won’t be playing for another month or two, his role on the Wizards’ roster last season was crucial. Recent reports suggest that Bryant is aiming for a mid-to-late December return. The downside to Bryant is that he’s only played 56 games over the last two seasons, and only 10 last season due to a season-ending ACL tear. The most important statistics to look at with Bryant are those from 2019, where he played 24.9 MPG over 46 games, scoring 13.2 points on 58.1% from the field, 7.2 rebounds, and 1.1 blocks per game. In addition, the Wizards are sorely lacking in size, with Rui Hachimura still out due to personal reasons. This leaves Montrez Harrel and Daniel Gafford to be the team’s big men at the moment. While Harrel will continue to play big minutes, once Bryant returns, Gafford will receive less than the 19.1 MPG he is currently averaging. Only owned in 31% of fantasy leagues, Bryant seems like the most obvious target to claim from waivers, unless C James Wiseman (62% owned) is still available.

Daniel Theis has been a reliable and versatile big man whose name really blossomed while in Boston playing alongside veteran big Enes Kanter. He was drafted by the Celtics in 2017 and played at least 63 games in each of his three seasons in a Celtics uniform. When he started 64 of 65 games during the 2019-2020 averaging 24.1 MPG, Theis averaged 9.2 PPG on 56.6% shooting, along with 6.6 rebounds per game. Last season, Theis played 42 games in Boston and was traded to Chicago where he played another 23 games. Between both teams, Theis started 51 games and averaged 24.6 MPG, producing 9.6 PPG while converting 54.1% of his shots taken. This season, Theis has started and played in every game for the Houston Rockets, producing virtually the same numbers (23.6 MPG, 9.2 PPG, 52.5% FG, 4.9 REBS). Owned by only 44% of fantasy basketball teams, he is available on waivers in more than half of fantasy basketball leagues. He is a safe and consistent player who plays with confidence and can reliably produce 15-35 fantasy points per game.