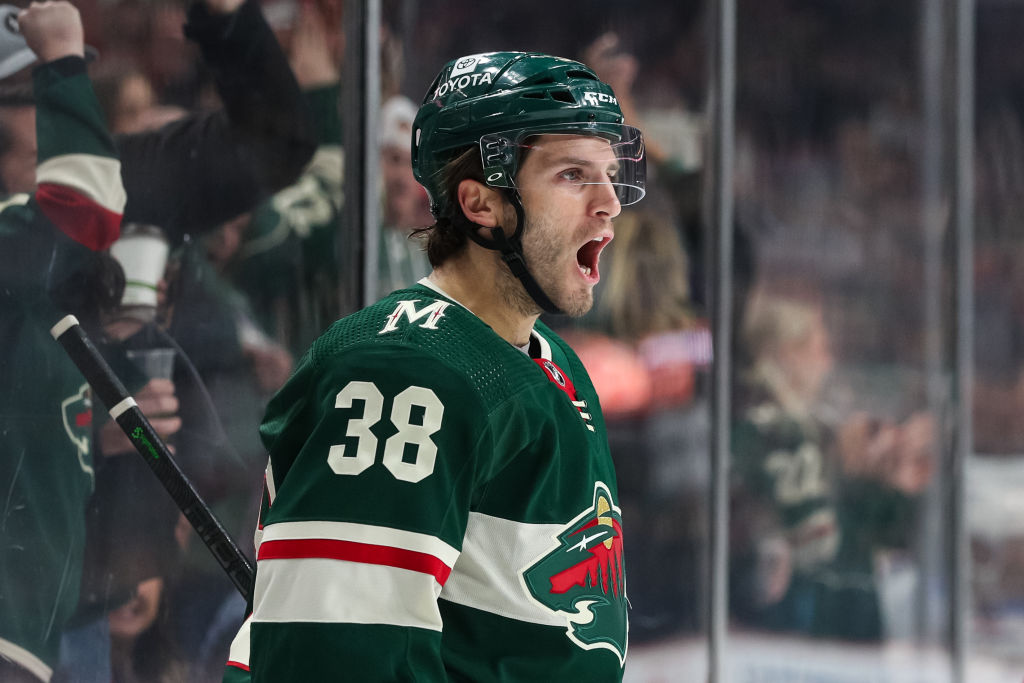 Hello, once more ladies and gentlemen! We have made it to the final two weeks of the regular season. This has been a long one, hasn't it?

It is crazier yet how this 2022 season has gone. Thanks to a blizzard, there is an extra game on May 1st. Anyway, here is the games played matrix.

Oh, but wait, there is more!

Please note that the first week's schedule is way, way busier on Tuesday, Thursday, and Saturday. There are 58 games in part one and 44 games in the conclusion. This is all spread out including six nights of double-digit contests (with a rare weekend double-double). Week 26 grants us a few more start and sit risks as a finale. Do not fret. We will be back for the playoffs in some shape or form.

The Minnesota Wild forward has been a godsend all season with 31 goals and 28 assists in 75 games. He has continued to play top-six minutes and get time on the man advantage. His little breakout last season and early season burst this year have morphed into what will certainly be a 60+ point campaign. Ryan Hartman is shooting at just about three shots per game and keeps finding ways to excel. The little extra jump in penalty minutes (85) is helping those who do have penalty minutes for a category. While the Wild have not had the easiest time of late, they have clinched a playoff spot almost certainly drawing St. Louis in Round 1. While a forward like Kirill Kaprizov could be rested, the same is not likely for Hartman.

The fantasy playoffs are turning into a boon when it comes to certain players including a few from the Ottawa Senators. Josh Norris continues to have a very good season for the Senators with 51 points in 59 games. Imagine if he had been a bit more healthy. The goal rate is what intrigues many. That 0.56 rate is not a fluke and Norris has 16 power-play goals in 2021-22. Just think, he is only 22 years old. The numbers including shots and scoring chances keep improving for Norris. Just imagine what he can do playing 75-80 games next year on an improved Ottawa squad. Even now, a 35+ goal, 20+ assist campaign would be quite something. Norris makes even Brady Tkachuk more effective. That's saying something.

So, it just feels like something is off with Brayden Point. Maybe, there is some sort of nagging injury but just a mere point in his last five games is scary. He does have 13 shots on goal but only nine scoring chances. Even faceoff wins have been outnumbered by faceoff losses over the past five contests. Point just seems to be a step slow in certain situations. Maybe this is something that rectifies itself over the final two weeks but what if it does not. Does anyone want to take that risk? After all, there are potentially better options out there for fantasy owners.

The reason for sitting a player like Blake Wheeler is easy. Nikolaj Ehlers is carrying this Jets team for better or worse (nine points in the last five games). While Blake Wheeler has two goals, Mark Scheifele is out for the rest of the road trip and honestly, Wheeler is just not worth the risk. At 35 years old, the winger just is not as fast or as sharp as he used to be. Even despite some outrageous ice time allowances, Wheeler has just been good enough and not great like he needs to be for the Jets to have a chance at making the playoffs. Wheeler may even be rested some with little or nothing to play for soon.

With Washington getting a bit of a road reality check, the one thing not to worry about is their top defenseman. John Carlson has quietly pushed himself up to almost a point a game this season (67 points in 71 games). He has two goals and six assists over his previous five games. The Washington blueliner is shooting at a career-high 8.8 percent on the season and has a personal best of six power-play goals to go with 17 more helpers on the man advantage. Since late January, Carlson has been exceeding a point-a-game pace and has been playing well defensively too.

The idea that the Colorado Avalanche only has to sew up the President's Trophy is crazy. Colorado is the #1 seed in the West no matter what. As expected, Toews will be rested for the next four-game road trip. Not everyone has a full two-week "Fantasy Week" so that makes Toews a player not to utilize at all regardless. By the time, he comes back, Colorado may even have the President's Trophy sewn up too. Either way, Toews is pointless to roster. Look at other defensemen on the team or perhaps a waiver wire pick from Ottawa, New Jersey, etc.

Sadly, Mike Smith likely shares time with Mikko Koskinen over the final regular-season games. However, that may not be a bad thing. Smith and well Edmonton are 14-3-2 over their last 19 games. This is put them safely into the playoffs and they may just lock up second in the Pacific by the weekend. The 40-year-old goaltender has won five straight games (six overall) while posting back-to-back shutouts. Giving up just four goals during this span has been a fantasy blessing for many just looking for a goalie to lean on. Talk about a goaltender and team coming through in the clutch at the perfect time.

This team is one of the most frustrating all season and poetically is on the verge of being eliminated from postseason contention this week. Winnipeg stands ten points out of a playoff spot with just six games to play. That means Connor Hellebuyck has to perfect hockey to guide Winnipeg to six straight wins. Then, the Jets have to still hope a team or two completely collapse over the final two weeks. This is a tall order at best. Consider that Hellebuyck is 2-2-1 in his last five starts while allowing 20 goals. This included giving up 11 goals in the state of Florida alone (seven to Tampa Bay, four to Florida). With the fact that Winnipeg has to face the New York Rangers, Carolina, and Colorado in their next three games, Hellebuyck may be getting a much-welcomed rest soon as Winnipeg misses the playoffs.