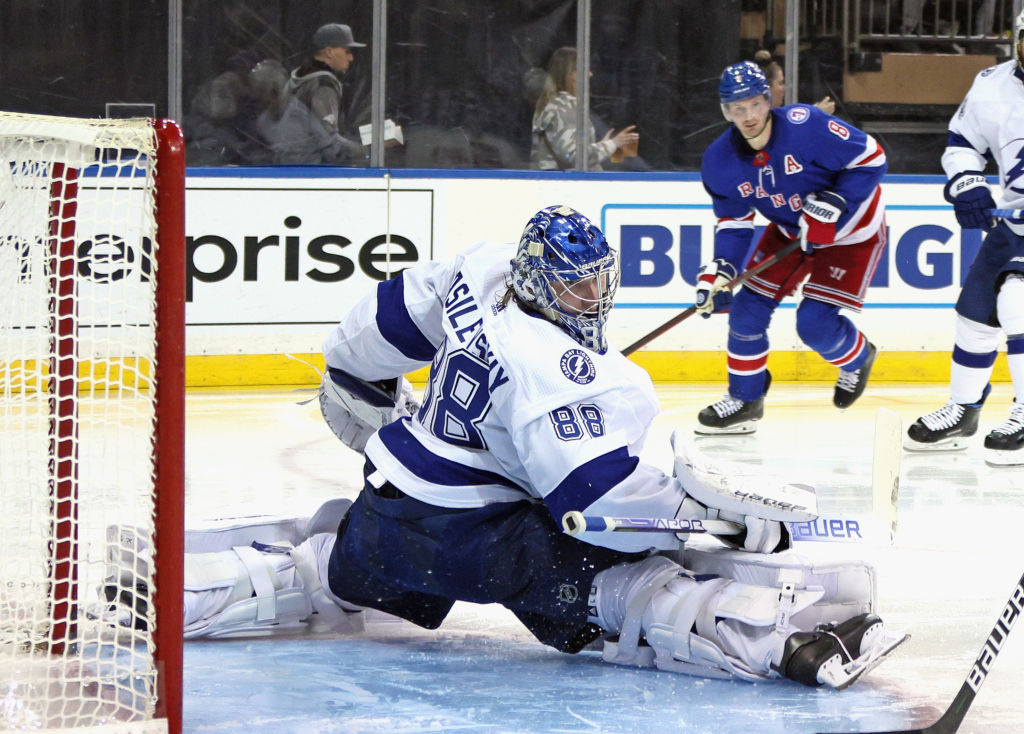 As we do a quick dive into Week 14, the spectre of COVID still is wreaking havoc in the fantasy hockey world. This does make start and sit a heck of a lot more challenging. Unfortunately, all the delays, postponements, and rescheduling just will likely add more weeks to one's fantasy hockey season. First, let us see who plays this week. For now...we look at the ultimate in voodoo...goaltenders.

The good news for Tampa Bay is that the Lightning do not have to worry about playing a back to back this week. With the New Jersey game postponed, Tampa now goes to Buffalo, then plays Vancouver and Dallas at home. That is great news for Vasilevskiy owners who were concered about going into Newark where COVID cases keep skyrocketing. Now, Vasilevskiy absorbed a tough loss to the Boston Bruins on Saturday as Boston scored four times on him before Tampa Bay rallied late. He is still 19-6-3 on the season with a 2.23 goals-against-average and a .923 save percentage. Most should not fret about the two losses much as the Lightning have prime matchups this week. Even some argued that the Russian goaltender could have played the back-to-back early in the week. However, again there was that COVID minor detail. Just keep vigilant for possible delays like the possibility of Arizona and Toronto having issues on Wednesday. That is the reality fantasy owners live in now. Expect the worst, smile when the best happens.

Desperate times call for desperate measures. Okay, the reality is that Marc-Andre Fleury even in his late 30's is still a very good goaltender in the NHL. Whether he gets traded or not is another matter entirely. However, there is some risk in the sense that Fleury can get shelled. He has faced 31 or more shots in four of his past five starts. His record is a respectable 2-1-2 in this span. That included some tough games against Nashville, Colorado, and Washington. He even beat Vegas on his first night back in Vegas, stopping all but one shot in the win on Saturday. Could that be a springboard for him this week? That answer is possibly. Games against Montreal and Anaheim at home are a bonus at this point. The only obstacle may be the game in Columbus. However, even the Blue Jackets are a bit undermanned and that could be a chance for Fleury to see more shots.

Every team playing once this week...

That is correct and one can thank COVID for it sadly. It is just a sign of the times. Basically, 25% of the league is just playing one game this week and that is even tentative. Let that sink in for a second. The problem with rosters getting so jumbled is this. Some teams are going to be too rested while others are coming in playing a normal load of games. It will be nearly impossible in some cases to gauge what will be a good or bad play. If your goaltender gets shelled, then it is off to the waiver wire in hopes of saving a week that went haywire. Keep goaltending minimums in mind and see if commissioners are waiving them. Hopefully and eventually, schedules will return to a sort of routine.

It will only be a matter of time before Shesterkin is cleared but the one thing so far that has been learned with goaltenders and COVID is this: Do not expect breathtaking or even normal performance right away. There is an effect. Andrei Vasilevskiy got hit for four goals in his first game back and several other goaltenders had rough first starts this season after coming back from having the Coronavirus. Shesterkin has been Vezina Trophy worthy all season when in the lineup. However, he has not played since Jan. 2. It is crazy to think he had two shutouts in his last four starts and we are saying "sit" him. However, depending on when he is cleared, it may be too late to start him and have the Russian be worth it.

The temptation is to ride Anthony Stolarz with John Gibson hurt yet again. We understand. Fantasy owners are desperate. Stolarz has been solid when called on and even saved 36 of 39 shots against a dominant New York Rangers team in a losing effort last week. Also, there is young prospect Lukas Dostal in the mix. Dostal has been a standout in the AHL for the San Diego Gulls all season. The 21-year-old Czech goaltender made 33 of 36 stops on Sunday against the Detroit Red Wings in the victory. It would not be a surprise if Stolarz and Dostal alternate starts until Gibson is ready to return. Most everyone in the Ducks' organization loves the way Dostal plays. It is easy to see why. Dostal moves like a younger Gibson with a little more athleticism. With the prospect of a three-headed goaltending monster until the trade deadline, Anaheim may be too volatile an option to start any goaltender.