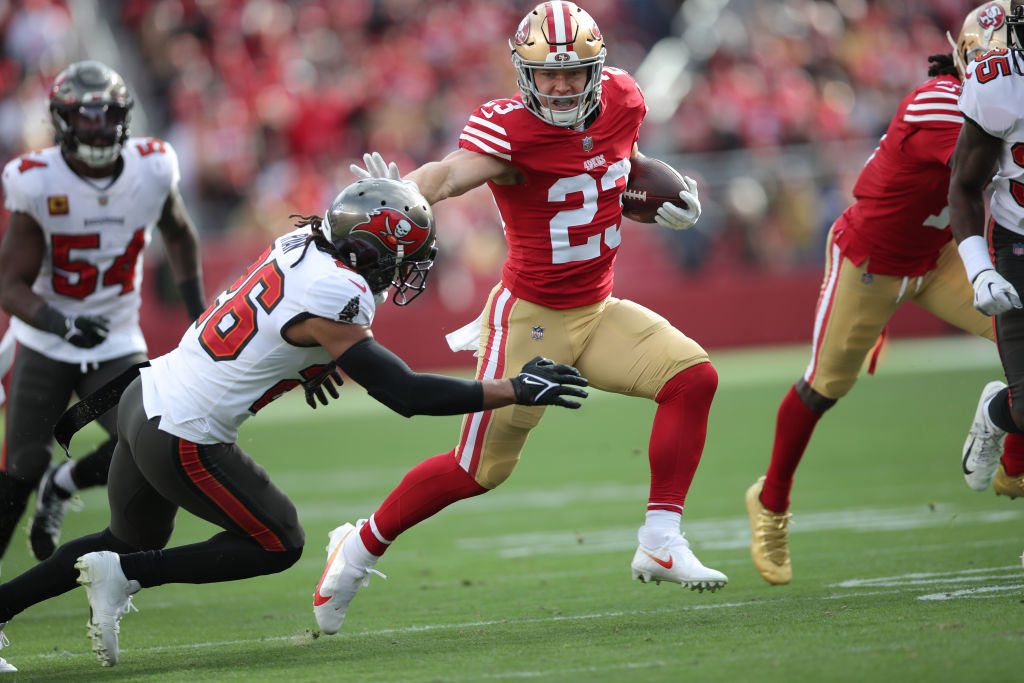 Sunday evening’s game features a game that brings a lot of nostalgia for anyone who remembers early 90’s football: the Dallas Cowboys visiting the San Francisco 49ers. The Cowboys are coming off a strong road win against the Tampa Bay Buccaneers, but they’re running into a burgeoning juggernaut of a 49ers team that has now won 11 games in a row.

In full disclosure, I picked against the Cowboys last week and they made me eat some crow in their 31-14 victory over the Buccaneers that was never really in doubt. Dak Prescott had a strong five-touchdown performance, the defense looked solid in limiting Tom Brady, and the only thing that really went wrong was kicker Brett Maher missing FOUR extra points.

The Cowboys will have a bit of a surprise factor (although this goes both ways) in that they haven’t faced the 49ers yet this season. Prescott has a solid cast of weapons surrounding him in Tony Pollard, CeeDee Lamb, Ezekiel Elliott, and Dalton Schultz (just to name a few) and will look to continue their high-scoring ways. The Cowboys offense finished fourth in the league in points per game this year with 27.5, which was a nice complement to their defense that finished fifth in the league with just 20.1 points allowed per game. In a vacuum, the Cowboys are well set-up for a strong road performance this week.

That said, NFL games are not played in a vacuum. And like I said above, the 49ers have turned into a bit of a surprising juggernaut.

I keep waiting for the wheels to fall off on 49ers rookie quarterback Brock Purdy" data-toggle="modal" data-target="#player-pop-up" href="/nfl_player_news/Brock_Purdy/">Brock Purdy, but it just hasn’t happened yet. While looked shaky at times in the 49ers 41-23 victory over the Seahawks last week, he was able to right the ship and finished with 332 passing yards and four total touchdowns. Deebo Samuel and Christian McCaffrey each chipped in with big games, which pushed George Kittle and Brandon Aiyuk to be more ancillary pieces. The 49ers have SO many weapons that it’s almost scary how much support Purdy has around him. The 49ers weren’t far behind the Cowboys and finished with 26.5 points scored per game this year, which was good for sixth in the league. Not bad for a team who has had to use three different starting quarterbacks – including a rookie.

To make matters worse for the Cowboys is the fact that the 49ers defense is really good. How good? They finished first in the NFL in points allowed at just 16.3 points allowed per game (and for context, that’s almost a full four points better than the Cowboys fifth-best 20.1 points allowed). While the Cowboys led the league with 33 forced turnovers, the 49ers weren’t far behind with

30 forced turnovers (which tied for second).

These are two really good teams that we’ll get to watch this week, and it wouldn’t surprise me if either one wins. However, the 49ers are on a roll and I have a hard time seeing how the Cowboys will stop them. San Francisco has lost all of one home game on the season (and that was to the Chiefs) and they’re firing on all cylinders right now.

Despite the strong defenses involved in this game, I still think we’ll see enough points scored to hit the over on the 46.5 total (something like 27-20 is well within the reasonable range of outcomes). And I have a tough time seeing how the Cowboys limit the 49ers high-powered offense while also overcoming the 49ers stout defense. I’m going all-in on the 49ers to both win and cover this week, and the against-the-spread pick is my lock of the week.

105.5 sounds like a big number, but we’re talking bout Christian McCaffrey here. After an injury-filled 2021 campaign, McCaffrey stormed back onto the scene in a big way this year and has surpassed this total in rushing yards alone in four of his last six games. I wouldn’t want to bet this for just rushing yards (we don’t have to!), but this combined bet gives us the added benefit of his almost 40 receiving yards per game over his past seven games. And for what it’s worth, our Prop Bet Tool likes McCaffrey to put up over 122 combined rushing and receiving yards this week.

If there’s one way the 49ers defense can be beaten, it’s through the air. Their run defense is absolutely stellar, but they’re actually in the bottom-half of the league in passing yards allowed per game. While CeeDee Lamb could factor in big there, I’m actually looking to Schultz with such a low total. In his last two meaningful games, Schultz has averaged seven receptions for 75.5 yards and two touchdowns. He’s a BIG part of the Cowboys offense, and I think he’ll see enough continued usage to take us to the promised land here.

I’m actually bucking the Prop Bet Tool here as it has Pollard projected for 65.8 rushing yards, but I just don’t see how that happens against the 49ers run defense. They only allowed 77.7 rushing yards per game to opposing offenses (good for second-best in the league), and Pollard will still cede some carries to Ezekiel Elliott. Furthermore, I’m envisioning a game where the Cowboys will be playing catchup on the road, and will likely be throwing more than usual. Pollard will likely be involved in that attack, but I think his carries will be limited and cap his rushing ceiling this week.