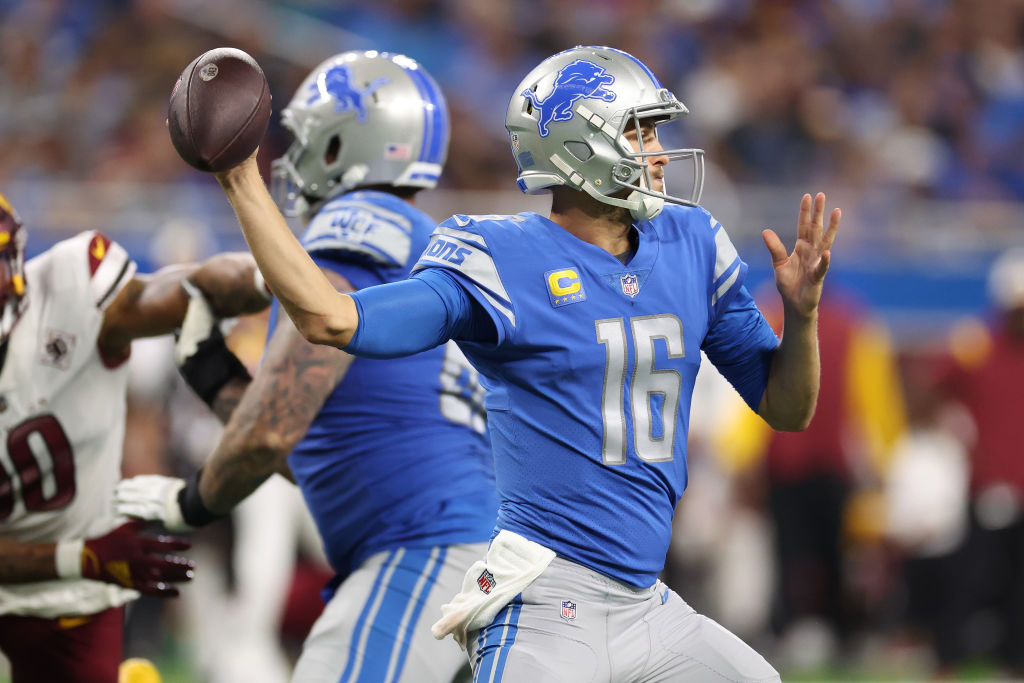 PrizePicks is offering tons of great prop bets for NFL Week 14 just like they do each and every week. It’s a fun and easy site to make bets on. They give you a stat for each player and you pick More or Less. It doesn’t get any simpler than that.

Goff finally has all his weapons at his disposal and has been looking great as of late. He is coming off a 340-yard game against the Jags and has an even better matchup this week against the Minnesota Vikings. Minnesota has the worst pass defense in the NFL. The only team that’s been close to as bad as them against the pass is the Titans, but those two teams have really separated themselves from the pack.

On top of this elite matchup that last week allowed Mike White to throw for 369 yards, his pass catchers are only going to get tougher to deal with. Amon-Ra St. Brown is the WR1, but now defenses also have to contend with Jameson Williams, and a healthy D’Andre Swift. This is difficult to deal with for a competent pass defense. For this defense, it’s nearly impossible.

Lawrence has made huge progress this year and will be a candidate to become a potential locked and loaded QB1 in 2023. He’s coming off a down week, but that is much in part due to an in-game injury and he should be good to go this Sunday. His injury is a foot injury which could be viewed as a negative, but there is another spin you can put on that. If he’s less mobile it could take away his ability to run and force him to throw the ball more. Which would obviously lead to more yards.

The matchup is also juicy. Remember when we mentioned the Titans’ awful pass defense earlier? That’s who he will be going up against. The second-worst pass defense in the NFL. The Jags should also be losing this game so Lawrence will be throwing all game. 241 yards should be an easy bar for him to clear this week as long as he’s not a surprised inactive due to his injury.

This was just a matter of whether or not we wanted to spotlight Zeke or Tony Pollard. Both are fine bets in this game against the Houston Texans. The Houston rush defense is by far the worst in the league and the Cowboys are going to blow them off the field. At times targeting the Texans doesn’t always work out because they get blown out so badly that players start to rest soon after half time, nevertheless, we are willing to take that risk here. He has been running great and has topped this mark in two straight games. Since returning from injury, he’s been getting plenty of opportunity carrying the ball 16 times per game as well. The opportunity and matchup alone make this bet a winner.

The Pick: More than 64.5 Rushing Yards

This is a very obtainable number for Ekeler to reach. While he does do most of his damage through the air and the Dolphins’ defense is solid against the run, they are still allowing over 110 yards per game on the ground and are susceptible to big plays off the edge. His rushing yards have been a bit erratic this season, nonetheless, his rushing line has gotten too low and he’s explosive enough to clear this bar with one play. We expect him to get 12-16 carries in this game which will be enough to reach 47 rushing yards.

The Pick: More than 46.5 Rushing Yards

In two games with Mike White at QB, Wilson has been targeted 23 times and caught 13 passes for 257 yards. This includes a 60 and 54-yard reception. The matchup is tougher this week against the Bills, however, all he needs is 62 yards. The Bills D is tough, but it’s not what it used to be. Wilson is red hot and White’s clear top target. Don’t overthink this one. It should be easy money.

The Pick: More than 61.5 Receiving Yards

Last year when Tyler Huntley replaced Lamar Jackson due to injury he hyper-targeted Andrews. Somehow this year he hasn’t even fewer weapons to target outside of him. In the five games, Huntley started Andrews was targeted 55 times. He turned those 55 targets into 43 receptions for 498 yards. In his worst game, he had 73 yards and that’s the only game he was under 85 yards. Twice he was significantly over 100 yards. There is no reason to believe that anything will change this week with Jackson out. The Ravens have done next to nothing to add weapons in the passing game to take targets away from Andrews.

The Pick: More than 54.5 Receiving Yards