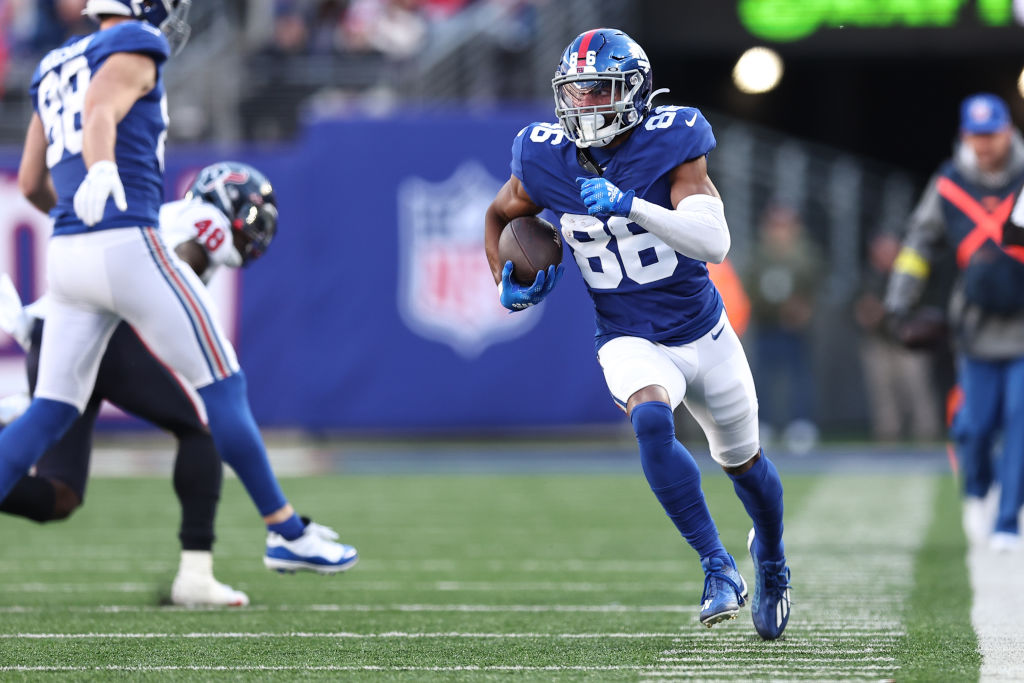 With quarterbacks and running backs out of the way, let’s dig into the Week 14 wide receiver and tight end start/sit decisions that are keeping us up at night.

It took about half the season and a bunch of injuries, but Slayton has finally taken over as the Giants' top pass-catching option. While that’s a relatively low bar, it’s still relevant for fantasy purposes as Slayton now has three straight games with six or more targets (including games of eight and 10 in there). While he’s yet to top 100 receiving yards and only has two touchdowns on the year, he’s consistently been putting up between 60 and 95 yards over his past five games and even has a little bit of upside due to this lack of touchdown production. Get him in your lineups against the Eagles.

Without looking, how many targets does Collins have over his last four games? The answer: 36! That’s a lot! Those admittedly haven’t been hugely high-value targets as he hasn’t topped 50 receiving yards in any of those games, but he does have two touchdowns during that timespan and has become an integral part of the Houston offense. Like with Slayton, that’s a low bar. But it’s still relevant for fantasy purposes.

He may have burned me last week, but I’m going back to the Zay Jones well again this week. Even though he only put up two catches for 16 yards last week, he still saw seven targets. And that comes on the heels of target totals of 14 and 10. There’s obvious risk here, but Jones is a big part of what Trevor Lawrence and the Jaguars are trying to do and I think he’s due for a rebound against a Titans defense that has given up fantasy points to opposing receivers.

I realize the concept of sitting Diontae Johnson would’ve sounded crazy three months ago, but I think that’s the reality of where we are today, my friends. George Pickens" data-toggle="modal" data-target="#player-pop-up" href="/nfl_player_news/George_Pickens/">George Pickens has usurped Johnson as the alpha in Pittsburgh and he’s also been saddled with subpar quarterback play (even worse than Ben Roethlisberger somehow). Johnson is still seeing his share of targets and he’s still catching 4-5 balls a game (so he’s not a MUST sit), but this isn’t a situation where Johnson is going to give you much more than flex spot production – if that.

I say this as a Patriots fan: stay away from Patriots players not named Rhamondre Stevenson for fantasy purposes. Meyers is still the Patriots' best receiving option (talk about a REALLY low bar), but he’s fallen off lately as New England's offense has fallen off. He’s seen 15 total targets over the last three games, but he hasn’t caught more than four balls or put up more than 62 receiving yards in any of those games. While the Cardinals are a defense that can be exploited, Meyers is an extremely risky proposition this week.

I keep seeing people say Robert Woods is going to step into a bigger role with Treylon Burks" data-toggle="modal" data-target="#player-pop-up" href="/nfl_player_news/Treylon_Burks/">Treylon Burks hurt, but Woods just hasn’t put together the production to match those expectations. While he’s seeing a healthy amount of targets, Woods has only caught three total balls in his last two games combined and hasn’t topped 70 yards since Week 3. He also hasn’t found the end zone since Week 4. Unless you’re basically forced to start him due to bye weeks, Woods belongs on your bench.

He’s back! This isn’t me saying Bellinger is going to turn into Travis Kelce, but the Giants are completely devoid of good pass-catching options and Bellinger stepped back into the lineup and immediately saw five targets last week. While he’s yet to top 40 receiving yards in a game all season, he did have three touchdowns in six games to start the year so there’s a role for him in New York’s offense. I’d feel good playing him under the assumption he’ll see another five-plus targets with some potential red zone usage against the Eagles.

We’re digging deep here, but Okonkwo has come on lately and should see continued usage with Treylon Burks out and the Titans lacking and good receiving options otherwise. Okonkwo has seen five targets in each of his last two games and has put up 103 receiving yards in those two games combined. While we’re probably starting him in the hopes that he puts up 8-10 points in PPR leagues, that’s pretty darn good in the current tight-end landscape.

I’ve always liked Knox for fantasy purposes, but this season has been a colossal disappointment. He only has two top-10 weeks and has fallen off a cliff as of late. He’s only seen three targets COMBINED in his last two games and is coming off a zero-catch game against New England last week. While his fortunes could always change, this is not a situation I want to willingly sign up for in Week 14 with my fantasy playoff hopes on the line.

Conklin is still seeing targets (including seven last week), but he’s not doing much with them as he’s only caught eight balls total in his last four games. Outside of a Week 8 explosion against the Patriots' slow linebackers, Conklin has fallen a long way from his early season success with Joe Flacco at quarterback and should be on your bench against the Bills this week.