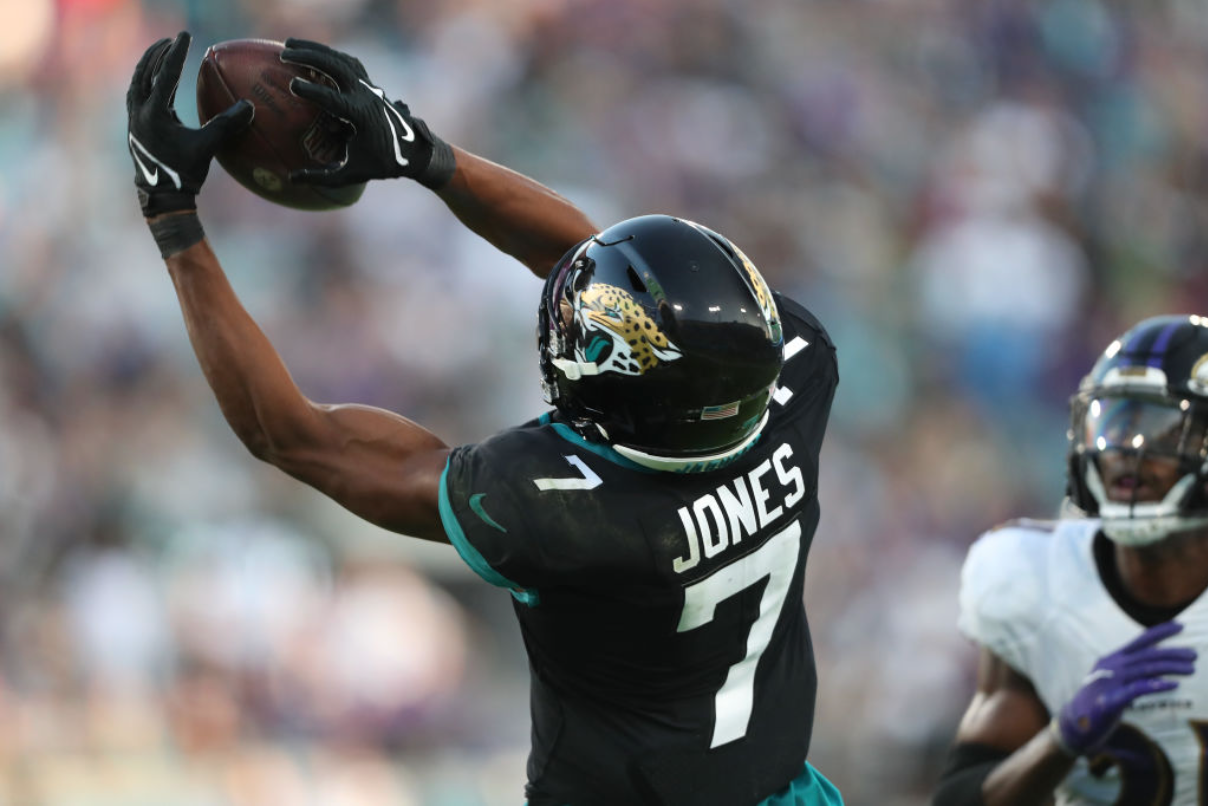 With Week 13 quarterbacks and running backs out of the way, let’s dig into the wide receiver and tight end start/sit decisions that are keeping us up at night.

Jones has been on an absolute tear as of late and has worked himself into must-start territory. While Christian Kirk is still the top receiver in Jacksonville, Jones has become a 1B to Kirk’s 1A as he now has 24 total targets over his last two games that have resulted in 19 catches for 213 receiving yards. Is there room for the wheels to fall off here? Absolutely (especially with Jones questionable with a chest injury). But as long as Jones is healthy, he needs to be in your lineups against a bad Lions defense.

While it was a bit delayed, the Burks breakout seems to finally be here. He’s seen 20 total targets over his last three games and has turned those targets into 14 catches for 205 yards. The Titans aren’t a prolific passing offense so Burks has a bit of a ceiling beyond his control, but he’s starting to establish himself as THE main (only?) passing weapon for Tennessee and he needs to be in fantasy lineups against the Eagles this week.

The Giants have been absolutely ravaged by injuries (along with trades and underperformance) in the wide receiving corps, and Slayton is essentially the last man standing. In turn, he’s put up solid numbers over his past five games with six or more targets in four of those games. The catch volume hasn’t exactly followed (Slayton’s highest game total during that span is five catches), but Slayton has made his catches count and hasn’t put up less than 58 yards in any of those games. I don’t think he’s a week-winner, but Slayton is a very solid WR2/flex play.

The Steelers have had lackluster quarterback play all year and Johnson’s fantasy performance has suffered because of it. While he’s still seeing targets, he hasn’t caught more than five balls in a game since Week 2 and hasn’t registered more than 63 receiving yards since Week 3. And to make matters worse, he hasn’t scored a touchdown all season. While Johnson has a nice on-paper matchup against the Falcons, he’s just too risky to be more than a flex play right now. And, he’s a flex play I’d leave on my bench if you have any of the players in the “start” section above.

Well, that was a fun start to the season. But sadly, that start was a long time ago at this point. The Commanders are still utilizing Samuel as a runner (anywhere from two to four carries a game over the past five weeks), but he’s seen his involvement in the passing game fall off a cliff since Carson Wentz got hurt and saw a grand total of zero targets last week. Wipe his hot start to the season from your memory banks and put Curtis Samuel on your bench.

Claypool is the de facto top receiver for the Bears now that Darnell Mooney is out for the season, but that really doesn’t mean much for fantasy purposes. While he’s seeing red zone targets, he’s still not seeing a lot of target volume as he has just 10 total targets over his last three games. And those 10 targets have translated to just five catches for 70 yards and zero touchdowns over those three weeks. Basically, Claypool’s three-week production is what you’d expect from a borderline fantasy starter in one week. The potential for increased opportunities is tempting, but Claypool can’t be trusted right now.

While Hurst hasn’t been a week-winner this year, he’s been a solid week-to-week fantasy contributor and now sits at TE8 on the year. He’s coming off a week where he saw nine targets and will be involved in a game against Kansas City that could (should?) turn into a shootout. While I think he’ll be more around the 5-7 target range (as opposed to 7-9 target range) now that Ja’Marr Chase is back, there should be plenty of fantasy value in whatever amount of targets Hurst sees this week.

After looking like he was about to turn a corner, Kmet took a step back against the Jets last week. However, I’m not going to hold that against him because the game was played in a mess of a rainstorm and he was catching balls from a backup quarterback. Even with the somewhat disappointing performance, Kmet saw six targets and put up three catches for 27 yards. With Justin Fields looking like he might find his way back to the field this week, Kmet provides some Week 13 upside against a shoddy Packers defense.

Dulcich had a nice run in Weeks 6-8, but that seems like a lifetime ago at this point. With the mess that the Broncos have become on offense, Dulcich’s productivity has taken a hit and he’s only caught seven total balls over his past three games combined. And to make matters worse, his yardage totals over that timespan have been 11, 30, and 11 with zero touchdowns. The tight end position is a total wasteland right now so I wouldn’t blame anyone for rolling the dice on Dulcich, but I’d keep him on your bench if you can.

I’m not sure why, but Conklin is a consensus top-15 tight end this week. I think it’s because he has a good (on-paper) matchup against a Vikings team that gave up two (yes, I’m a stubborn Patriots fan and am going to count that overturned call as a touchdown) touchdowns to Hunter Henry last week, but Conklin has only seen eight total targets over his past three games combined and has only put up double-digit PPR points in one of his last eight games.