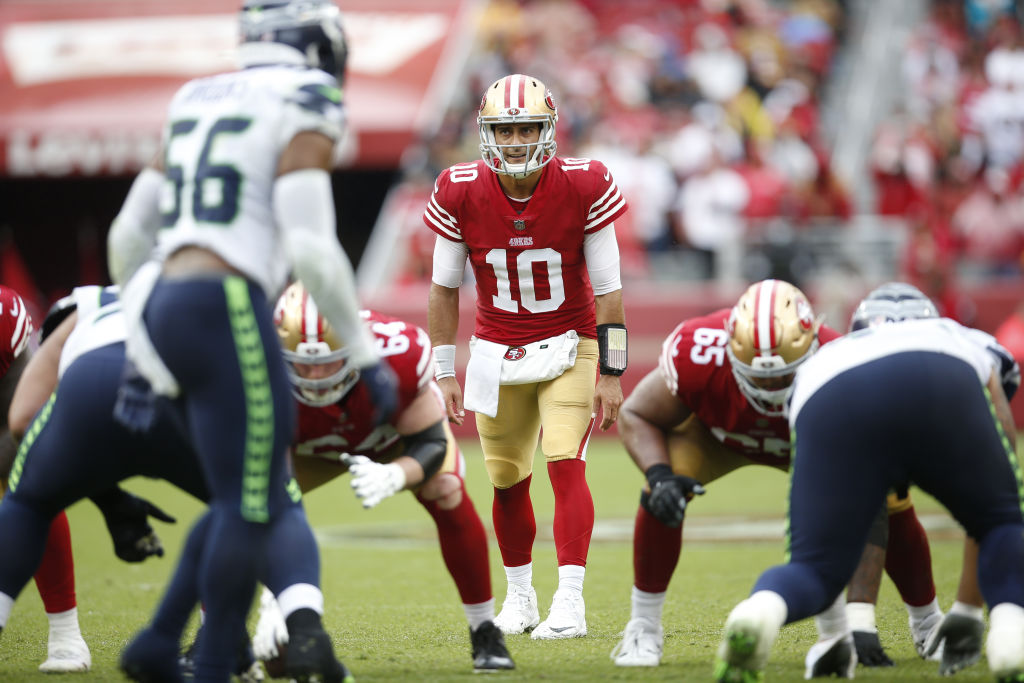 With all that said, let’s dig into the quarterback start/sit decisions that are keeping us up at night.

It’s Jimmy G’s world; we’re all just living in it. Over his last six games, he has had four top-10 fantasy performances and is coming off a QB5 performance in Week 11 (with four touchdown passes). The 49ers have one of the best (maybe the best) collections of offensive weapons in the NFL, and Garoppolo has benefitted greatly. He’s also been smarter with his decision-making as he hasn’t thrown an interception for three straight weeks. With a great (on-paper) matchup against the Saints this weekend, Jimmy G should be started with confidence in Week 12.

Lawrence has had a bit of an up-and-down season, but he’s QB13 on the year and had solid back-to-back performances heading into his bye week. While he’s only thrown for 300-plus yards once this season, Lawrence has been adding some fantasy safety with his legs (including 79 total rushing yards in his last two games) and has been cutting down on his mistakes with just six interceptions on the year. With a post-bye home matchup against a Ravens team that can be thrown upon, Lawrence is a strong Week 12 play.

Raise your hand if you thought Mariota would still have a starting job heading into Week 12… If you have your hand raised, you’re a liar. While it’s a little worrisome that Mariota lost Kyle Pitts, the Falcons weren’t using him enough anyway, so the loss shouldn’t affect Mariota that much. Mariota’s passing yardage totals have been lackluster (just one game over 200 passing yards in his last eight games), he’s been finding the end zone consistently and has been supplementing his fantasy output with over 30 rushing yards per game. Though he probably won’t win your Week 12 fantasy matchup for you outright, Mariota provides a nice floor and has a great matchup against a Commanders defense that has been giving up points to opposing quarterbacks.

Mr. Unlimited has turned out to be, well, quite limited. While the Broncos have been a mess as a whole this season, Wilson has been a large part of that mess. He has one top-10 quarterback finish all year (back in Week 4) and has finished his last three games as QB21, QB21, and QB20, respectively. Wilson has just one multi-touchdown game (again, back in Week 4) and has only topped 300 passing yards once (back in Week 1). To make things even worse, Wilson has more or less stopped running as he has just 33 rushing yards total over his last three games. If you have a fantasy playoff berth on the line this weekend, you should steer clear of Russell Wilson.

Rodgers hasn’t been losing fantasy matchups for anyone, but he hasn’t been winning them either. He’s been pretty consistently finishing in the QB11-QB14 range all season and hasn’t posted a top-10 quarterback finish all year. While he’s been developing a strong connection with Christian Watson, Rodgers hasn’t found much help elsewhere and has a rough road matchup against the Eagles this week.

It was a fun start to the season for Goff, but the good times have come to an end. While Goff hasn’t been horrible, he hasn’t finished a week as a top-12 quarterback since Week 4 and has finished as QB22 and QB26 over the last two weeks. To make matters worse, the Lions have a tough Thanksgiving matchup against a good Bills defense so Goff has an uphill battle this week. Keep him on your bench.