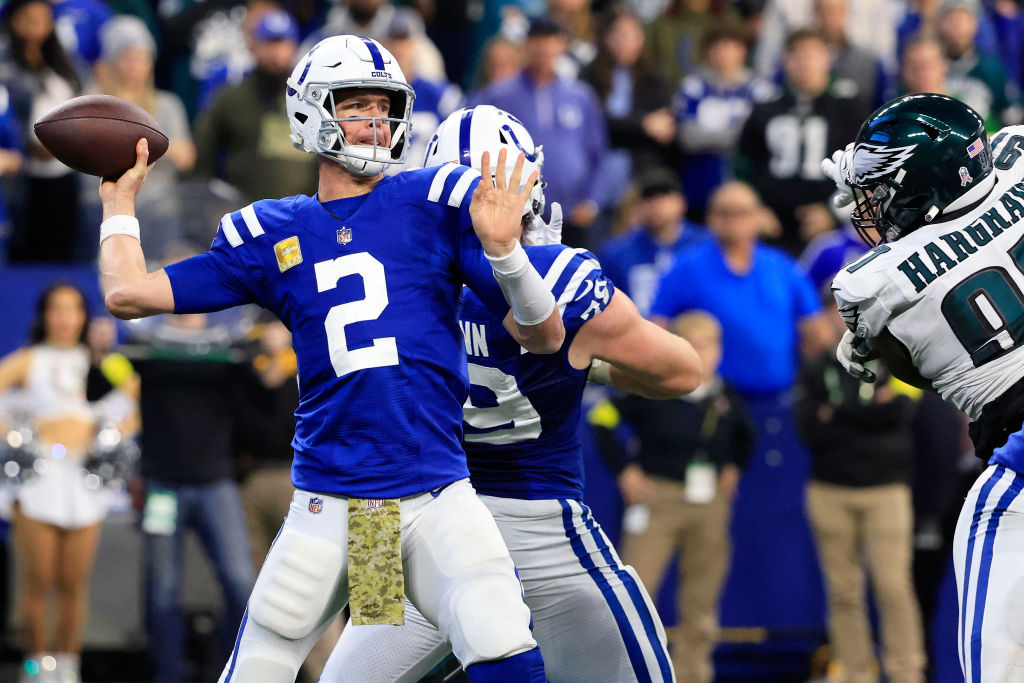 It couldn’t get much harder to find a solid quarterback and/or tight end free agent options this deep into the fantasy football season. Nonetheless, Matt Ryan has yet to turn the ball over in the last two weeks since returning to start for the Colts but remains available in more than 85% of leagues.

Though the Saints have struggled to make anything happen consistently on offense this season, Juwan Johnson has emerged as a seriously valuable fantasy tight end. He’s produced 40+ yards and one touchdown in each of the last three weeks.

Let’s take a look at some early quarterback and tight end options still available on the waiver wire as we gear up for Week 12 of the fantasy football season.

The Philadelphia Eagles escaped Indianapolis with a narrow 17-16 victory over the Colts. In the game, Matt Ryan went 23-of-32 for 213 passing yards. While he didn’t have a standout game in Week 11, the veteran QB hasn’t turned the ball over in his first two weeks back as the Colts starter. He got a win in Week 10, and helped the Colts truly compete in Week 11 against potentially the best NFL team right now in the Philadelphia Eagles. If Matt Ryan can keep being careful with the football and avoid turning the ball over, then the Colts’ designated starter should retain fantasy value fore the remainder of the year. With Michael Pittman Jr. and Alec Pierce continuing to progress and Johnathan Taylor back from his injury, Ryan’s rest-of-the-season forecast looks positive. Ryan and the Colts get a nice matchup against the Pittsburgh Steelers in Week 12, a defense that is currently allowing the seventh-most fantasy points per game to opposing quarterbacks.

Taylor Heinicke has netted the Washington Commanders a few wins over the last few weeks, including handing the Eagles their first and only defeat of the 2022 season. Heinicke has clearly been the superior option to Carson Wentz. Still, he’s completed less than 60% of his passes in each of the last three games. In five games played for the Commanders this season, Heinicke has completed 60.8% of his passes for 1,031 yards, five touchdowns and four interceptions. Those aren’t impressive numbers, but he is connecting with his receivers on offense enough to be considered a mediocre, perhaps decent at best, fantasy football QB starter heading into Week 12.

Saints’ TE Juwan Johnson has emerged as one of the team’s most valuable passing targets this season. New Orleans lost Michael Thomas for the rest of the year and have not had WR Jarvis Landry in many of their games this season (though he did catch a touchdown in Week 11). While rookie Chris Olave has been unbelievable this season and is likely leading the competition for NFC Offensive Rookie of the Year, Johnson has combined for 349 receiving yards, and five touchdowns this season.

With all the injuries to top tight ends such as Dallas Goedert and Darren Waller, Johnson could be the perfect replacement for a fantasy owner in desperate need of a deep-league waiver wire pickup. That said, the Saints face a 49ers secondary that has been pretty stingy against opposing tight ends (eighth-fewest fantasy points allowed per game). While Johnson is worthy of a speculative add, you may not want to fire him up in Week 12.

When looking at tight ends not named Travis Kelce or Mark Andrews, fantasy owners are essentially throwing a dart. That said, Hooper finished Week 11 as the second-best tight end after hauling in all four of his targets for 36 receiving yards and two trips to the end zone Thursday night against the Green Bay Packers. Considering Ryan Tannehill doesn’t have a true WR1 in Tennessee, Hooper could emerge as a trustworthy tight end down the stretch of the 2022 season. He’s very touchdown dependent but he had topped 30 receiving yards in three consecutive outings.