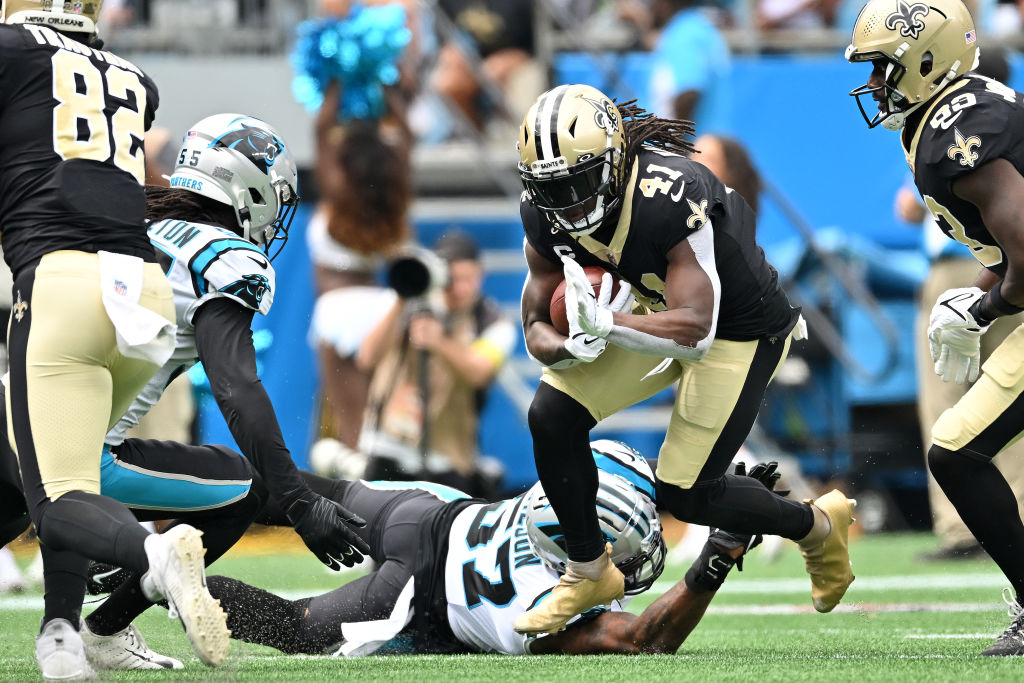 Alvin Kamara has not been healthy to start this season and has certainly let down the fantasy owners who drafted him with their first or second overall selection. That's why his value has plummeted on the Trade Value Charts.

Even Tony Pollard and Cam Akers have higher trade values than Kamara right now. AJ Dillon of the Green Bay Packers and Michael Pittman of the Indianapolis Colts are two offensive players that could also be nice buy-low targets heading into Week 5.

On the other hand, Khalil Herbert’s inflated value makes him someone you might want to trade away. As soon as David Montgomery comes back, Herbert will be returning to RB2 playing time and therefore getting fewer carries.

Let’s take a look at the best fantasy players to buy-low and sell-high before Week 5 kicks off!

Though he’s been injured since the season began and really hasn’t found his footing yet, this is Alvin Kamara. Right now, his trade value has dropped so low that he currently has a lower trade value than Dallas’ RB2 Tony Pollard (12.88) and Rams’ unimpressive young back Cam Akers (12.88). Sit on that for a second and let it sink in. Granted, AK41 has only played in two games this season and has produced 100 yards rushing yards, 19 receiving yards, and zero touchdowns. Kamara was selected in the late first or early second round in most drafts whereas Pollard was picked much later (and Akers has been a bust this season). The point is that Kamara’s value has never been lower and you may be able to get him at a discounted price given that his owner is likely very frustrated. Perhaps offer Pollard and Akers for Kamara.

Over the last couple of weeks, Michael Pittman has been quiet. In Week 1, he exploded for 121 receiving yards and one touchdown. He was unfortunately inactive in Week 2 due to injury but came back in Week 3 for eight catches and 72 yards. However, Pittman struggled in Week 4 and went three-of-six on targets for just 31 receiving yards, netting fantasy football owners 6.1 FPTS in PPR formats. Pittman is without a question the Colts’ top route-runner but his absence in Week 2 and his inefficient Week 4 have made his trade value plummet. Over the last week, Pittman has dropped by -1.1 points in the NFL Trade Value Charts. He is currently ranked below WRs Terry McLaurin (16.81) and Chris Olave (16.84). Pittman is a stud and will bounce back in Week 5. Look for him to replicate his Week 1 numbers on Thursday Night Football against a tough Denver Broncos secondary.

Dalton Schultz has been off to a relatively slow start this season. After Week 4, he dropped by another -0.9 points in the Trade Value Charts. Schultz has played in three games for the Cowboys (missed Week 3) and has nine receptions for 80 scoreless yards. For a guy who was expected to be one of the most fantasy-worthy tight ends of 2022, Schultz has failed to do much of anything. Still, he could erupt any given Sunday. Right now, the Cowboys’ tight end ranks below many other players at the position including Noah Fant (10.65), Logan Thomas (11.31), and Mike Giasecki (11.69). While he hasn’t gotten off to a great start this season, Schultz’s deflated trade value makes him the top buy-low tight end candidate heading into Week 5. Not to mention, Schultz should see a massive uptick in value once Dak Presctt returns and takes over for Cooper Rush.

Finally, CEH is healthy and playing better than ever. Now in his third NFL season, Edwards-Helaire is producing solidly as a pass-catching running back. Right now, CEH is having a monster season. He’s produced 208 rushing yards, 117 receiving yards, and five total touchdowns. He also hasn’t fumbled the ball a single time this season. Patrick Mahomes has been going to Edwards-Helaire in red zone opportunities. However, the two-yard TD reception he had on Sunday was more of a “right place, right time” situation than a showcase of the young running back’s skill set. Despite his impressive play, fantasy owners need to consider that he’s been injury prone and that there are many other good players at the position ranked below Edwards-Helaire on the Trade Value Charts. For instance, Aaron Jones (21.97) and Dalvin Cook (21.47) are both trailing CEH on the Trade Value Charts despite the fact that Jones and Cook have proved that they are consistent workhorses over the last few seasons. Jones already has 327 rushing yards, 81 receiving yards and two total touchdowns. What is separating CEH from these guys is how many touchdowns he’s recorded. At this point in the season, I would argue that Aaron Jones and Dalvin Cook are more valuable than CEH even though the Chiefs running back has more fantasy points on the season.

Chicago Bears’ starting RB David Montgomery sustained injuries to his knee and ankle in Week 3 and did not play in Week 4. Montgomery is questionable heading into Week 5, and in his absence, Herbert has enjoyed the role of RB1 for Chicago. While he could be missing the Bears’ contest this Sunday, Montgomery’s injuries aren’t all that severe in the sense that he hasn’t sustained any structural damage for both injuries. As a result, Montgomery’s return to the Bears’ lineup should be a question of a week or two. In Montgomery’s absence, Herbert has been exceptional. The Bears’ traditional RB2 has taken the place of Montgomery at RB1 and has produced fantastic numbers. In Week 3, Herbert had 20 carries for 157 yards and two rushing touchdowns as well as two receptions for an additional 12 yards. He followed that up with a strong outing in Week 4 where he had 19 carries for 77 yards and one catch for 24 receiving yards. Herbert’s efficiency on the field is not questionable. Nonetheless, the potential for David Montgomery’s rather quick return could destroy Herbert’s fantasy value. As soon as Montogomery returns to the active roster, Herbert’s first-team reps will immediately drop. Whether this happens in Week 5 or in Week 6, Herbert’s fantasy value is limited and tied to Montgomery’s health. Still Herbert has balled out and rightfully so, his trade value has skyrocketed. This is the perfect time for fantasy owners looking to cash in on a smart free-agent pick-up to get their money’s worth.