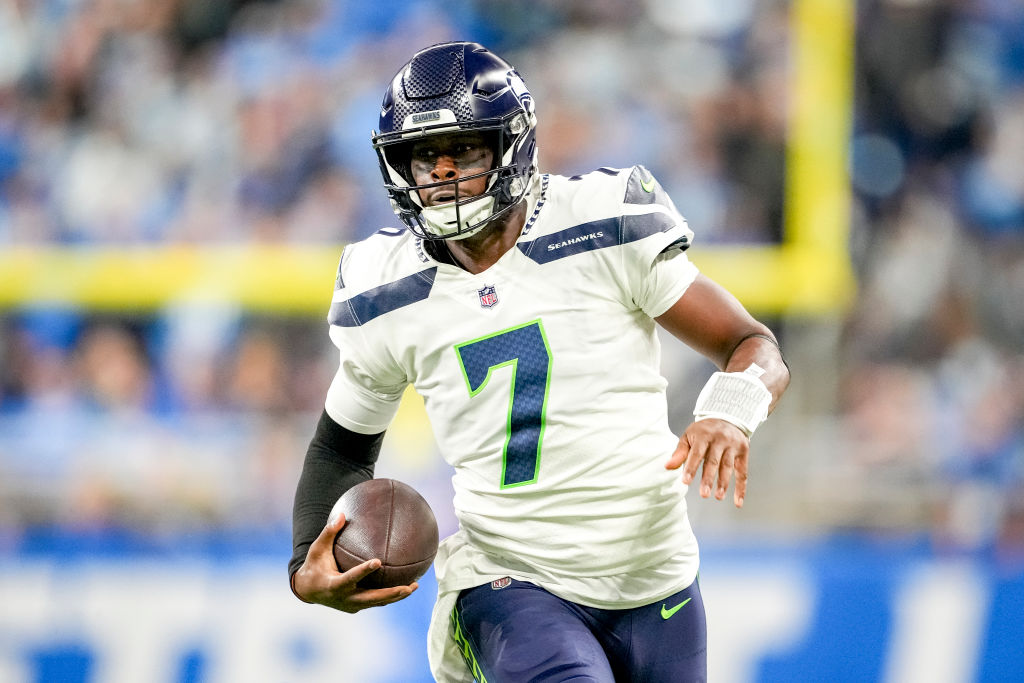 It's that time of the week to identify the top players at each of the core four positions to target on the waiver wire with your FAAB budget. There have been a ton of injuries and busts to start the season so let's dive deep and find some diamonds in the rough.

How good has Geno been? Last week he would have been easy to add, while this week I can see him being taken as the #1 waiver wire pick. I’m not sure I would overpay for him but with the lack of good quarterbacks available, his value is going way up. FAAB $20-25

Wilson had a rough start in the first half against the Steelers but he rebounded nicely and helped the Jets steal the road victory. If he can build on that success, there is a good chance he can throw up decent numbers the rest of the way. FAAB $20-25

People will look at the box score and see three INTs and panic; I watched the game and know that Pickett looked solid and got his receivers involved. Pickett is going to be a pretty good QB one day, but this year there might be some ups and downs along the way. Be patient. FAAB $80-110

Jones is a train wreck of a passer, but Brian Daboll has figured out how to play to his strengths and have him run the ball on some naked bootlegs. He might not throw for 300 yards at any time, but in Superflex leagues he does have value. FAAB $10-15

Cordarelle Patterson was placed on injured reserve which should provide a pathway for Allgeier to be the lead back for the Falcons over the next few games. He’s not much of a pass catcher, so I like him more in standard and ½ pt. ppr formats but the opportunity is there for him to shine. FAAB $160-180

He will be back in the next week and could have an immediate impact. Antonio Gibson has been underwhelming and the coaching staff is partial to Robinson.  FAAB $300-330

With Javonte Williams out for the year, Melvin Gordon should be the starting RB for the Broncos. Boone has worked his way into snaps and has some juice if given the opportunity, especially as a receiver. Murray was just signed off the New Orleans practice squad on Monday and could work himself into the team’s snaps by Week 6. Don’t overpay for Boone as this has all the makings of a three-man committee. FAAB Boone $140-160; Murray $100-110

Pacheco ran the ball very well against Tampa and looks like he is the clear backup to CEH. There’s a good chance he is available in leagues since his start has been underwhelming. FAAB $100-110

Practicing again and should return soon. Harbaugh likes him and always manages to find him carries. FAAB $40-50

While he’s not the fastest WR around, Palmer has good size and runs solid routes. If Allen misses more time, Palmer could certainly step up and become a player who can give the team serious production. FAAB $40-60

Zay missed last week’s contest against Philadelphia but the team expects him back for Week 5. Zay has become Trevor Lawrence’s second-favorite target behind Christian Kirk. With good health he could have 4-5 more TDs this season. FAAB $30-40

With the utter lack of production from the Giants wide receivers, it feels obvious that Robinson is going to get a chance to produce as soon as he returns from injury. I liked him at drafts and still think he has a chance to shine as soon as he can get back on the field. FAAB $40-50

Moore has been slow to develop but I am betting on his skills and the fact that he plays on one of the top offenses in the league. If he can start to see his playing time increase, I think there is a chance he finishes the season as Mahomes’ most trusted wide receiver. FAAB $90-110

Pierce has quickly become the WR2 for the Colts and I can see him having more red zone success in the not-too-distant future. With Jonathan Taylor possibly out with a high ankle sprain, Pierce could be a sneaky source of receptions as he is a huge target and chains mover. FAAB $70-80

The Lions have their BYE week coming up in Week 6 so if the team chooses to rest Amon-Ra St. Brown and DJ Chark one more week Reynolds should be the biggest beneficiary. He and Jared Goff have a connection from their days in Los Angeles, making him a sneaky pickup. FAAB $20-30

With Isaiah McKenzie questionable with a concussion and Jamison Crowder out with a broken ankle, the next man up is the Shakir, the rookie from Boise State who showed in training camp that he has significant upside. Keep him tucked away as a sneaky add. FAAB $15-20

Will certainly be needed with Burks out. FAAB $10-15

Thomas is a humongous target in the red zone and I feel confident that he will return from last year’s injury to catch at least five TDs this season. He’s worth rostering as a TE2 but watch for potential inconsistency mainly due to Carson Wentz. FAAB $20-30

Aaron Rodgers loves throwing to him in the red zone. He’s never going to be a double-digit target player each week, but I think he has a reasonable chance at 5-6 more TDs. FAAB $40-50

I would take a long look at Hill ONLY if he qualifies as a tight end in your league. The Saints use him as a gadget player, and I see him with the chance to make one or two big plays a week which makes him almost as good as other current starting TEs like Irv Smith, Cole Kmet, and Mike Gesicki. FAAB $20-25

With Geno Smith throwing it more often, Dissly becomes a high-end TE weekly streamer. Don’t overrate his recent performances as he is more of a reach than anything. FAAB $20-25