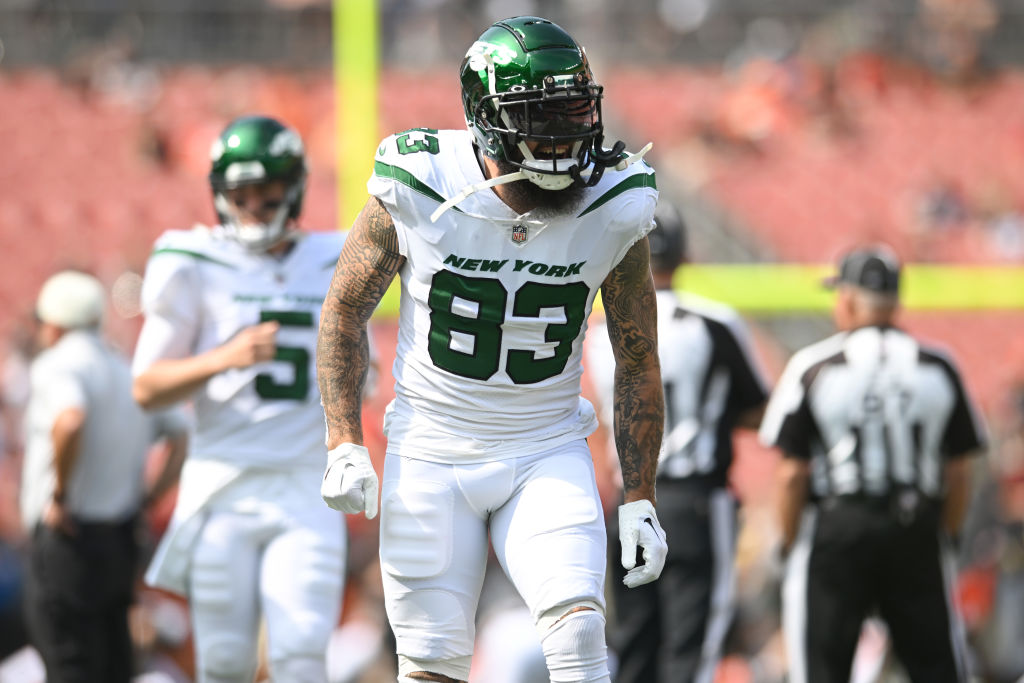 In his debut season with the New York Jets, Tyler Conklin has gotten off to a swift start.

After a huge game in Week 3, Jets’ tight end Tyler Conklin has become the hottest trade target based on ETI% (Estimated Trade Interest). Elsewhere, star running backs Alvin Kamara and Austin Ekeler who were both first round selections in most fantasy drafts, have gained tremendous trade interest as a result of slow starts to their respective seasons. Fantasy owners could be trying to shop for Kamara and Ekeler at a low-cost as their trade values have sunk since the season began. In contrast, RBs Cordarelle Patterson and Aaron Jones have had a pretty impressive first three weeks of the 2022 regular season and are garnering trade interest who see the potential for these players to become some of the most valuable backs this season.

As we head into Week 4, let’s take a look at the fantasy football players who are drawing the most interest from owners after the first three weeks of the regular season.

Former Vikings TE Tyler Conklin is starting to come into his own in his first season with Gang Green. The tight end market is very shallow and proposing acceptable deals involving this position is quite rare. However, he had a monster performance in Week 3 in which he caught all eight balls thrown his way for a very clutch 84 yards. Many owners are trading for the veteran while others don’t want to let him go. We recommend holding onto Conklin for just one or two weeks. Through the first three weeks of the regular season, Conklin has tallied 18 catches for 140 yards and a touchdown. Not only is he catching a lot of balls, he is also being targeted heavily by Joe Flacco. Conklin is trending in the right direction.

As a result of Sterling Shepard tearing his ACL on Monday night, his season is over. You have to feel bad for Shep who has failed to play a full season in a very long time.

However, Richie James has filled in nicely and even saw some action in the first two weeks of the season. James led the team in receptions and yardage through two weeks. It seems that Daniel Jones and James have great chemistry. I also think the WR could flourish due to the lackadasical state of the Giants' receiving corps so far this season. Toney struggled the entire game on Monday night and Golladay looked like a shell of his former playing days in Detroit.

This could open up a ton of opportunities in the middle of the field for the former San Francisco 49er. I wouldn’t be surprised if James turned some heads this season but admittedly I prefer him in Dynasty than redraft formats.

Alvin Kamara has had a rough beginning to the 2022 season. In Week 1, he only had nine carries for 39 yards. It was reported after the game that the Saints’ star RB was dealing with a rib injury which subsequently kept him out of the Week 2 contest against the Bucs. Kamara returned to first-team reps on Sunday against the Panthers where he had 15 carries for 61 yards. Though he is listed as questionable heading into Sunday, he’s on his way back to being healthy and since Jameis Winston has struggled throwing the ball, the Saints could be turning to Kamara more. As a result of his inefficient first three weeks of the regular season, his trade value has dropped considerably. Another aspect to consider which could be increasing the level of trade interest for Kamara is injuries to the Saints' receiving corps. Both Jarvis Landry and Michael Thomas left Sunday's game in Carolina due to injuries. ESPN's Field Yates reported today that the pair of wideouts did not practice on Wednesday as a result.

The combination of these factors has made the five-time Pro-Bowler (2017-2021) a prime buy-low candidate and the fantasy RB who fantasy owners are going after the most heading into Week 4. He is a pass-catching back who explodes when the Saints are lacking depth at wideout. Expect Kamara and Chris Olave to have huge games on Sunday.

Similarly to Kamara, Chargers’ RB Austin Ekeler has struggled to get going this season. In most drafts, Ekeler was a top-five overall pick. That's because in 2021, Ekeler had 911 rushing yards, 647 receiving yards, and 20 total touchdowns. Through the first three games of the 2022 regular season, Ekeler has produced 80 rushing yards and 139 receiving yards but has not yet found his way into the end zone. Particularly, his inefficiency running the football is apparent this season and perhaps a result of opposing defenses finally hyperfocusing on allowing Ekeler no room to break out of the pocket. He’s produced 80 rushing yards on a total of 32 carries and is therefore only averaging 2.5 yards per rushing attempt so far in 2022. In comparisson, Ekeler has averaged 4.5 yards per carry throughout his five-year NFL career (2017-2021). Still, Ekeler has already exceeded 200+ scrimmage yards and he will find his way into the endzone multiple times this season. Like Kamara, the relatively quiet first few weeks from Ekeler have made him a top buy-low target for fantasy owners who think he’ll be getting back into full-season form as we head into October.

Terry McLaurin has been solid through the first three weeks of 2022. After signing a major contract-extension this offseason, McLaurin has caught 12 passes for 235 yards (19.6 AVG) and one touchdown in 2022. Carson Wentz has performed better at QB than many would have expected which is helping the Commanders passing game. While the Commanders’ offense was shut down by the Eagles in Week 3, they produced 55 combined points in Weeks 1 and 2 largely through their passing game. If effective, McLaurin is the team’s top-option at receiver. While he has dropped a few easy catches this season, his yard production after each reception this season has been impressive. Right now, he is averaging an NFL career-high 78.3 receiving yards per game through the first three games of 2022.

Aaron Jones has been solid to kick off the season. In Week 1, Jones had five carries for 99 yards and three catches for 27 yards. He followed that up with a massive Week 2 where Jones had 132 rushing yards, 38 receiving yards and one touchdown.

He had a relatively quiet Week 3 in a battle against the Bucs where he had 36 rushing yards and 11 receiving yards. Jones is just shy of 300 scrimmage yards through the first three games of 2022 and is trending upwards. As a result, he is hot trade target at RB heading into Week 3. There’s also a chance that Jones sees an uptick in receptions as a result of injuries to the Packers’ receiving corps. Notably, Sammy Watkins was placed on the team’s IR ahead of Week 4.

Cordarelle Patterson has been absolutely incredible to kick off 2022. Patterson finally had his breakout season at 30 years old in 2021 when he joined the Falcons and transformed into a running back. Originally a punt-returning wide-receiver, Patterson has found his way as a high-throttle hard-hitting RB for the Atlanta Falcons. As a Saints fan, I was in awe of his play in Week 1 to help the Falcons hold a three-possession lead until the fourth quarter. Patterson was just pounding into the Saints defense. In Week 1, Pattterson had 22 carries for 120 yards and a touchdown. He also had three catches for 16 receiving yards in the contest. Patterson was more quiet in Week 2 as the Falcons struggled against the Rams’ defense. He bounced back for a stellar Week 3 contest against the Seattle Seahawks where he had 17 carries for 141 yards (8.3 AVG) and one touchdown.

This season, Cordarelle Patterson is building off of what he accomplished last season. In 2022, Patterson has 49 rushing attempts for 302 yards (6.2 AVG) and two rushing touchdowns. In addition to a few receptions here or there (remember that he was drafted as a wide receiver), Patterson is truly becoming one of the most valuable fantasy running backs this season. As a result, many fantasy owners are aiming for him as they know he is at the core of the Falcons’ offense in 2022.

Russell Wislon and the new Denver Broncos’ offense has struggled to find its rhythm so far this season. Right now, Wilson has a career-low (by almost 10 points) rating of 83.2 this season. He’s completed just 59.4% (career 64.9 CMP%) of his passes for 743 yards, two touchdowns, and one interception. In addition, WR Jerry Jeudy has struggled to stay healthy in the first few weeks of the season, with injuries both to his ribs and his right shoulder. Still, this is Russell Wilson, and we’re still very early on in the season. Naturally, people expect Wilson to help the Broncos be relevant this year and could be using Wilson’s disappointing production in the first three weeks of the regular season as a reason to buy-low on Wilson. In the NFL Trade Value Charts right now, Wilson (13.35) ranks below Jared Goff (13.54), Kirk Cousins (13.91), Carson Wentz (14.93), and Derek Carr (15.07). Though Russ has had a rough first three weeks as the new QB in Denver, he is at the very least more valuable than any of those guys for fantasy purposes. It’s also noteworthy that Matthew Stafford (13.42), Tom Brady (13.68), and Aaron Rodgers (13.91) are also trading below many QBs who they are better than as a result of slow starts in 2022. Wilson is at the forefront of veteran QBs who’ve seen their trade values drop substantially as a result of relatively unimpressive numbers produced heading into Week 4.