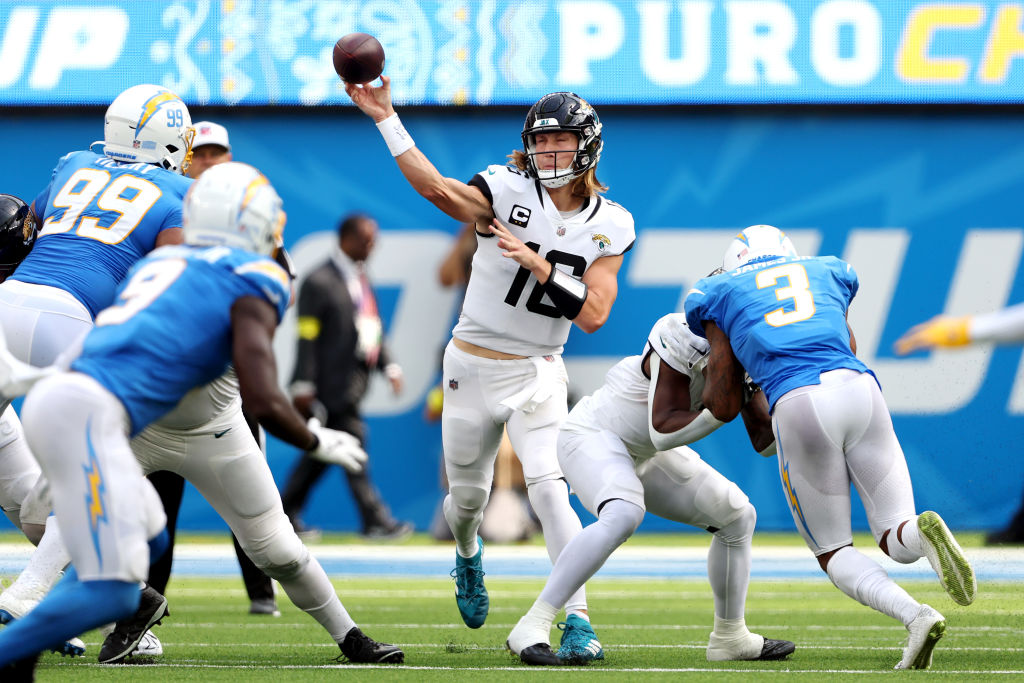 Through the first three weeks of the regular season, Lawrence (who had a rough Week 1) has led the Jaguars to a 2-1-0 record by completing 69.4% of his passes for 772 passing yards and six touchdowns. The former first overall selection in the 2021 NFL Draft is truly coming into his own and is putting Jacksonville on the map. Likewise, veterans Marcus Mariota of the Falcons and Geno Smith of the Seahawks have turned heads in their new roles as starting quarterbacks for their respective offenses.

At tight end, Cleveland’s David Njoku had a massive game on Sunday producing 89 yards and one touchdown. Elsewhere, Rob Gronkowski attended the Bucs home-opener against the Green Bay Packers this Sunday which has encouraged some fantasy owners to claim Gronk from waivers despite not being on an active NFL roster at the moment.

Let’s take a look at the best available free-agent quarterbacks and tight ends to target from waivers as we wrap up Week 3 and head into Week 4 of the 2022 regular season.

Trevor Lawrence and the Jacksonville Jaguars are finally starting to look like the offense they were trying to build in the first round of the 2021 NFL Draft. While the Jags lost to the Washington Commanders in Week 1 in a week where Lawrence completed just 57.14% of his passes for one touchdown and one interception, Lawrence has led Jacksonville to two impressive back-to-back victories in Week 2 and in Week 3. In Week 2, the Jaguars hosted the Colts and held them to a bagel. Lawrence went 25-of-30 for 235 yards and two touchdowns to help the Jaguars destroy the Colts 24-0. This Sunday, the Jaguars headed to Los Angeles to take on a banged up Justin Herbert and the Chargers. They defied the odds and defeated Los Angeles 38-10 on the road. Lawrence threw for 262 yards and three touchdowns. After finishing Week 1 with a 75.0 rating, Lawrence earned himself a 121.5 rating for Week 2, and a 115.5 rating for their big road win against the Chargers this Sunday.

Trevor Lawrence is heading into Week 4 red-hot. Despite a rough Week 1, the former Clemson star-quarterback has completed 69.4% of his passes for 772 yards, six touchdowns, and just one interception this season. In his second NFL season, Lawrence really looks like he is coming into his own and is playing like a No. 1 overall selection. In addition, his offensive weapons including WR Christian Kirk, RB Travis Ettienne, and even TE Evan Engram are proving to be increasingly reliable targets for Lawrence in 2022. While Lawrence is only available in approximately 35% of fantasy football leagues at the moment, this is likely the last week you’ll be able to claim him as a free agent. Right now, he is producing stellar numbers and his near-perfect play over the last two weeks should encourage fantasy owners looking for a quarterback to take a look in his direction. Jacksonville's less-than-medicore defense also gives Lawrence more possessions and opportunities to produce fantasy points. Lawrence is absolutely roster worthy at this point of the season.

In the Falcons first season without Matt Ryan in years, Marcus Mariota has stepped up to the plate and impressed, leading the team at the position. The Falcons defeated the Seahawks 27-23 on the road in Week 3. Mariota completed 65.0% of his passes for 229 yards and a touchdown, finishing the contest with a strong 99.8 QBR. This season, Mariota has racked up 640 passing yards through the first three weeks. While he has three touchdowns and three interceptions, his yard production and completion percentage is well-higher than people would have expected from a guy who barely played over the last few years. Not to mention, Mariota has dual-threat ability. He has a few rushing touchdowns this season and you never know when he is going to take off from the line of scrimmage.

This feature of his game is disrupting opposing defenses and is what specifically allows him to break out into open space unexpectedly, sometimes for a touchdown score. In Week 4, the Falcons take on a beatable Cleveland Browns secondary on their home turf. Fantasy owners can certainly do worse than firing up Mariota in this situation, especially considering the increased chemistry between Drake London and his signal caller.

With Russell Wilson out of the picture in Seattle, Geno Smith has taken over at quarterback and done a pretty impressive job through the first three weeks of the 2022 regular season. Smith has passed for 717 yards and four touchdowns with just two interceptions through the first three games of 2022. He even earned them a big 17-16 Week 1 win over Wilson and the Denver Broncos. Though he hasn’t played much since leaving the New York Jets in 2016, Smith is now a veteran who’s learned the Seahawks offense as a backup since the 2020 season. This makes him undoubtedly more valuable than Drew Lock who hasn’t started this season. Right now we are seeing that experience and time in the league matters. Geno Smith is available in approximately 90% of fantasy football leagues at the moment yet he has some really solid weapons at his disposal in DK Metcalf and Tyler Lockett. And don’t forget the running game featuring Rashaad Penny and Kenneth Walker. If you are in desperate need of a quarterback, Smith could be your man, especially with a matchup against an atrocious Detroit Lions secondary on the horizon in Week 4.

After a quiet Week 1 and Week 2 where Njoku combined for just four receptions and 39 yards, the Browns tight end exploded in Week 3 on Thursday night. He was 9-of-10 on targets for 89 receiving yards and one touchdown. Jacoby Brissett made it very clear in Week 3 that he wants to look for the big 6'4", 246 lb. tight end who can outpower the defensive players guarding him down field. While he may not have games as big as he did against the Steelers this week consistently, his offensive production this Week makes him one of the hottest tight ends to target heading into Week 4. Considering how shallow this position is, Njoku can make an immediate impact on your fantasy roster.

Gronk showed up to the Buccaneers' season-opener this Sunday to cheer on his old team and his old pal Tom Brady. At the moment, Tampa Bay has a depleted core of pass-catchers as a result of injuries and a suspension (Mike Evans) affecting many of their receivers and tight ends. Because of Gronk’s appearance at the Bucs-Packers showdown this weekend, many fantasy owners have reacted by claiming Rob Gronkowski off waivers.

Though healthy, TE Kyle Rudolph whom Tampa Bay acquired this offseason, did not play in Week 1 or Week 2 and only had one catch for 12 yards in Sunday’s 12-14 home loss to Aaron Rodgers and the Green Bay Packers. While Gronk’s agent has gone on record following Sunday’s game to reaffirm that the currently retired tight end has no plans of playing this season, much speculation is surfacing about a potential reunion for Gronk and Brady as the 2022 regular season keeps rolling. This is especially the case because Brady’s offensive weapons aren’t as available as they were in Week 1. Though Brady went 31-of-42 to complete 73.81% of his passes for 271 yards and a touchdown, he probably could have thrown for more touchdowns if his weapons were healthy. In comes the potential for a Gronkowski return, and the rush of enthusiastic fantasy owners who are adding the current free-agent (who is not on an NFL roster) to their bench. Gronkowski is available in well-above 90% of fantasy football leagues at the moment and if he returns to the Buccaneers, you could come off as a true genius if you claimed him from waivers right now. You could also come across as a complete fanboy if Gronk’s agent is correct and the tight end chooses to stay off the field in 2022.

Hopes have been high for the former Virginia standout ever since he was drafted. Woods brings a unique and dangerous blend of size (6’7” and 253 lbs.) and speed (4.61-second 40-yard dash) that was lacking to the tight end position in Indianapolis.

Matt Ryan was pretty pumped up after the third-round rookie hauled in the game-winning touchdown against the Kansas City Chiefs on Sunday. This draft pick has already paid off handsomely as he actually scored two touchdowns yesterday afternoon. Although he only played 23% of the team’s offensive snaps and saw just an 8% target share, the young tight end produced 15.1 PPR fantasy points. Not bad for your third week in the NFL.

Woods barely has any competition for targets at the position and the receivers behind Michael Pittman all have question marks. Woods could develop into one of Ryan’s favorite red-zone options. He’s absolutely worth a dart throw in deeper leagues if you are in desperate need of a tight end.