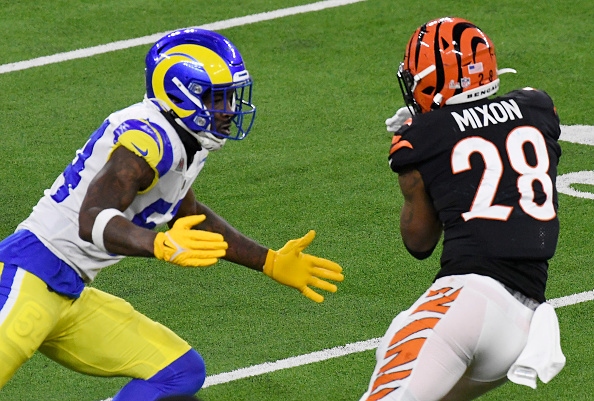 Sometimes, players’ ADP in fantasy football can skyrocket or plummet quickly during the offseason. Running backs Joe Mixon, Leonard Fournette, and Travis Etienne have all seen their draft stock increase in recent weeks. In contrast, RB Alvin Kamara, WR Tyler Lockett, and QB Matthew Stafford have seen their ADPs decrease as of late.

Let’s take a look at some notable 2022 fantasy football draft candidates who are rising and falling in ADP ahead of this year’s drafts.

Since June, Joe Mixon’s draft stock has risen substantially. Back then, he had an ADP of approximately 26, which means he was being selected at the beginning of the third round in most 12-team PPR formats. Today, his ADP of 10.10 indicates that fantasy football owners are preparing to draft Mixon as early as the late first round or the early second round of most drafts. Mixon’s draft capital has increased partially because of how excellent Joe Burrow’s offense performed last season.

Mixon finally was able to stay healthy in the Bengals’ Super Bowl run last year and finished with a solid 1,500+ all-purpose yardage and 15 total touchdowns (12 rushing and three receiving). Mixon should continue to do a ton of damage on all three downs in Cincinnati. He’s without a doubt worth an early second-round selection, especially since the Bengals don’t have a ton of other talent at the running back position. If Mixon’s knee holds up, he’s a solid RB1 in all fantasy football formats.

In early June, Leonard Fournette was expected to be drafted in the late fourth-round of 2022 fantasy football drafts. However, he’s now going at the very end of Round 2 in 12-team PPR leagues. Last season, Fournette racked up 811 rushing yards, 69 receptions for 454 receiving yards, and 10 total touchdowns. After the Bucs got rid of Ronald Jones, Fournette shouldn’t see much competition in Tampa Bay’s backfield. But the main reason Fournette’s ADP skyrocketed was the return of Tom Brady. With Brady back under center, every skill player on the Buccaneers should see an uptick in value. Plus, the Bucs brought in Julio Jones to take Antonio Brown’s spot as the WR3 in this offense, not to mention they also have Russell Gage on the depth chart behind Chris Godwin and Mike Evans. Fournette should see a ton of red zone opportunities and is practically a lock to find the end zone at least 10 times. Fournette should be a great value pick at the tail end of the second or at the top of the third round heading into the 2022 fantasy football season.

Over the last month, Travis Etienne’s draft stock has risen by approximately 10 slots. In training camp, Eteinne is looking really healthy and impressing the coaching staff. This comes after he missed all of his rookie season due to injury. This year, he is getting the chance to play with Trevor Lawrence again, which should truly help him as he gets rolling for the first time in his NFL career. Though he was expected to be a sixth-round pick in most drafts back in July, he is now expected to go in the early fifth-round of most fantasy football drafts. Fantasy owners will have to spend more draft capital to acquire Etienne now that it appears he has officially surpassed James Robinson on the depth chart. Not to mention, Etienne is going to be one of the best pass-catching running backs in the NFL, which serves PPR fantasy owners very well.

Colts’ wideout Michael Pittman’s ADP has gone from peaking at approximately 64 in late May to less than 35 today. There are good reasons for Pittman’s draft stock skyrocketing. The Colts have gotten a major upgrade at quarterback by signing Matt Ryan. In addition, TY Hilton is currently a free agent and not with the Colts. While Hilton could be returning to the practice squad, it is clear that he is no longer in his prime. The Colts are moving on at wide receiver, and Pittman is the principal route-runner at the core of this rebuild.

Pittman is a bruising running back once he gets the ball in his hands, which is why he is so dominant in YAC (yards after catch). Of his 1,675 receiving yards at the NFL level, 40% of those yards have come after the catch. Pittman loves to showcase his bulldozing skills once he has the ball in his hands.

Frank Reich loves to get his best pass-catcher the ball in space despite the fact that Johnathan Taylor stole the spotlight last season. Reich often draws up screen passes and reverses just to get the ball into Pittman’s hands. Although it’s difficult to believe Pittman will see a 25% target share again in 2022, there is no doubt that the Colts will go out of their way to call plays specifically for their star wideout. Pittman deserves to be drafted at the tail end of Round 3. He’s an absolute steal in Round 4. While Pittman is a solid receiver and Matt Ryan’s best target heading into this season, there are other strong route-runners to consider at the same point of the draft including Terry McLaurin (ADP: 37.29) and DK Metcalf (ADP: 39.11). Still, I’d prefer Pittman over both simply due to the quarterback situations. McLaurin has Carson Wentz under center and Metcalf will be catching passes from either Geno Smith or Drew Lock. Pittman has a much safer floor than either of those other talented receivers.

In mid-May, Alvin Kamara was certainly expected to be selected within the first 10 selections of most fantasy football drafts. Now, Kamara isn’t expected to be drafted before the second round. Last season, Kamara’s production slightly decreased. He produced 898 yards rushing, 439 yards receiving, and had nine total touchdowns in 2021. The main concern for Kamara is a potential suspension being handed to him before the season begins. At the 2022 NFL Pro Bowl, Kamara and his entourage punched and kicked a man who was refusing to let the Saints star onto an elevator so that he could leave the nightclub he attended. The video shows that Kamara specifically struck the man at least eight times.

Recent reports indicate that Kamara will likely be ready to start the season in Week 1. Kamara’s legal team successfully delayed their next legal hearings for his case until September 29. Since the NFL won’t hand down any disciplinary actions until his legal situation plays out. If his team continues to delay proceedings, it could make the NFL hold off on any disciplinary action for Kamara for the entire season. As a result of these recent reports, Kamara’s draft stock is starting to increase again. He is the Saints’ best player and if he plays this entire season, should be an early second-round pick at the latest. While he may not be a first-round pick in 2022 fantasy football, he should certainly be drafted higher than other RBs with higher draft stocks at the moment. RBs Aaron Jones (ADP: 15.42), Nick Chubb (ADP: 14.50), and D’Andre Swift (ADP: 11.63) are all expected to be drafted higher than Kamara. One could easily make the argument that Kamara is better than all of those guys in fantasy. The main reason he’s dropped below them is his current legal situation. Right now, the news surrounding AK’s battle in court suggests that he will be ready to go in Week 1, and that he could avoid any disciplinary action from the NFL throughout the 2022 season altogether.

Since the Miami Dolphins signed Tyreek Hill this summer, Jaylen Waddle’s draft stock has plummeted. While he may have been an early fourth-round pick in June or July, he is now expected to be selected in the late-fourth or early-fifth of most PPR drafts. Going into this season, Tyreek Hill will immediately become Tua Tagovailoa’s top target this season which will likely reduce the quantity of times Waddle will be targeted per game this season. Waddle amassed 104 receptions in his rookie campaign and totaled 1,015 yards and six touchdowns last season. Waddle won’t see nearly as many opportunities now that Tyreek Hill is stealing the attention from Miami’s signal caller.

With Russell Wilson out in Seattle, two incredible route-runners will be catching passes from either Geno Smith or Drew Lock (Which one is better? lol). DK Metcalf and Tyler Lockett both are at a huge disadvantage going into this season as a result of the monumental downgrade at quarterback. Drew Lock has completed just 59.3% of his passes in his career while Geno Smith has completed 58.8% of the passes in his career. Accurate targets to Lockett should drop considerably in 2022, as both QBs cannot throw the ball accurately enough for quality receivers like Lockett or Metcalf.

Matthew Stafford has dropped approximately 10 ADP points since June as a result of some injuries sustained in training camp. In addition, Robert Woods is headed to Tennessee and Odell Beckham Jr. isn’t close to being ready. As a result, the Rams’ will be fully reliant on Cooper Kupp and Allen Robinson when the season gets going. In the meantime, Stafford doesn’t seem completely healthy. As a result, his draft stock has slipped lately. While Stafford is undeniably one of the best QBs heading into 2022, his draft stock has taken a hit because of some injuries to him in training camp and due to some potential concerns at wide receiver.