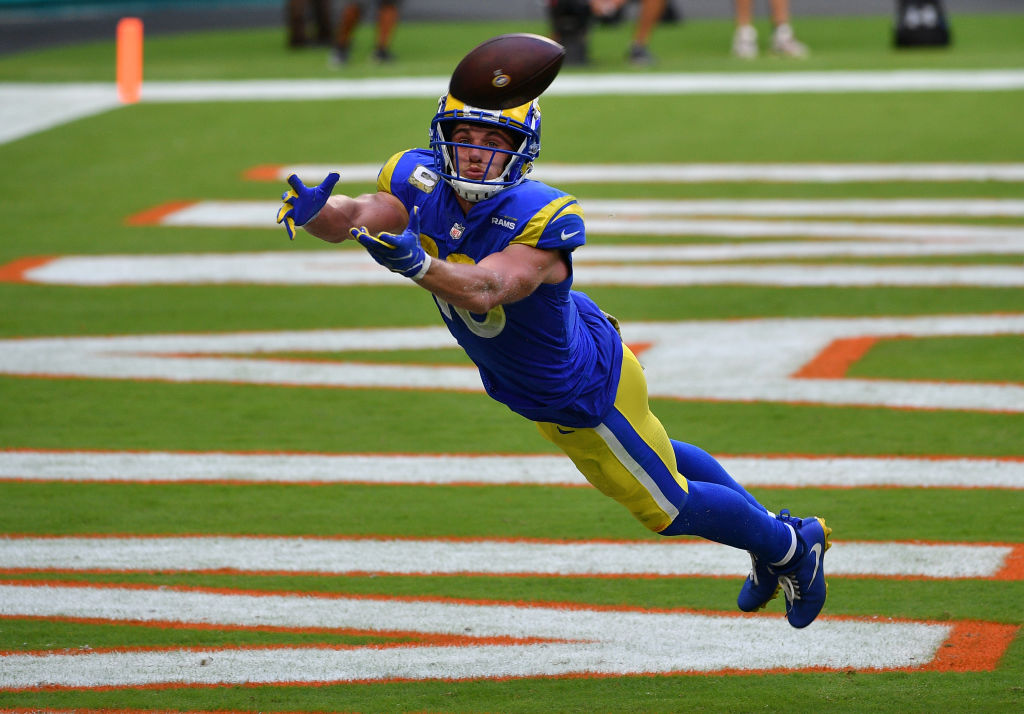 There is no better time than the NFL postseason! After converting 62.5% of our Best Bets heading into the final week of the regular season, which is an unheard-of percentage, we had a bit of a down day last Sunday, going 2-3 in Best Bets and 3-2 in props. We still finished the regular season with a conversion rate of just a hair over 60%.

It is simply unrealistic to think that you are going to win at a higher rate than that. Of course, there will be good days and bad days, but it is important to trust your process and remain diligent. And especially when you are just getting your feet wet in the sports betting world, it’s important to temper your expectations. Sports betting is not a quick money-making scheme. It is not realistic to expect a small deposit will turn into life-changing winnings. The most successful gamblers know that the only way to be profitable over a long period of time is to increase your bankroll in small increments.

After a successful season of wagers but a slight loss in Week 18 due to the vig that sportsbooks take from every bet, it’s time to get back on track when the stakes are higher and there are tons of props to take advantage of in the Super Wild Card Round.

Please note that all NFL Wild Card odds and lines are current as of 11 AM EST on Thursday, January 13.

To keep things consistent, all odds are from DraftKings Sportsbook. Sign up now and get a deposit bonus of up to $1,000!

We all know that the Eagles will attempt to run the ball against a Tampa Bay Buccaneers defense that has struggled in recent weeks, allowing five 100-yard rushing games over the last seven weeks. However, the Bucs were missing Shaq Barrett and Jason Pierre-Paul, as well as linebacker Lavonte David. Although David may not be back in action for the first game of the postseason, Barrett and JPP have already been cleared. The Bucs had a very stout rushing defense to begin the season and I expect Tampa to force Hurts to use his arm to beat their secondary.

Not to mention, the Eagles’ defense isn’t anything to write home about itself. Tom Brady should light up their secondary despite being without the services of Chris Godwin (out for the season with an ACL and MCL injury) and Antonio Brown (released from the team after inappropriate behavior during the Bucs’ victory over the New York Jets in Week 17). Mike Evans is still ready to go despite lingering injuries and Rob Gronkowski should provide Brady with a safety blanket and a huge red-zone target. Plus, Leonard Fournette is expected back for this game. The Bucs’ offense is still elite and should get a decent lead heading into the second half.

Hurts is going to have to let some deep balls go if the Eagles are going to compete in this one. Rookie wide receiver, DeVonta Smith, broke the Eagles’ franchise rookie record for most receiving yards in the season. He will play a big role in the Eagles’ aerial attack. Tight end Dallas Goedert has also seen more targets as the season has progressed and has developed a solid rapport with Hurts. Although Hurts will do plenty of running himself and give the ball to his three-headed running back committee featuring Miles Sanders, Jordan Howard, and Boston Scott, the Eagles will be in too much of a hole to turn to the run in the second half. Expect Hurts to break 200 passing yards easily, even if it’s in a losing effort.

After a lackluster start to the season, Jones stepped up in the final third of the season after superstar tight end Darren Waller went down with an injury. Jones tallied 67, 50, and 120 yards respectively from Week 15 to Week 17. Waller finally returned in Week 18, and although the Raiders put up a whopping 35 points on the Chargers in their thrilling overtime win, Jones only managed 27 yards. With Waller back in the lineup and Hunter Renfrow serving as Derek Carr’s go-to wideout, Jones will take a backseat to the better pass catchers in the lineup. The former Buffalo Bill didn’t produce 44+ receiving yards in any game between Week 2 and Week 9. And in the Raiders’ last matchup with the Bengals, Jones tallied just one reception on two targets for 20 receiving yards. Yes, Vegas will likely have to throw the ball a lot to keep up with Joe Burrow and Cincinnati’s high-powered offense, but Renfrow and Waller should see the majority of those looks. Take the Under.

Reagor only finished with 33 receptions for 299 yards in his second season in the NFL. However, with Philadelphia being 8.5-point underdogs, Hurts is going to have to get his team back into this contest by throwing the ball downfield. Reagor has only produced 17+ receiving yards in seven games this season, but something tells me that Philly will try to get the speedy playmaker more involved in this contest. After all, Reagor did draw two pass interference calls against the Bucs back in Week 6 after beating the secondary on deep routes.

Kupp produced at least 90 receiving yards in all but one contest this season. In his last matchup with the Arizona Cardinals in Week 14, the All-Pro wideout secured 13 receptions for 123 yards and a touchdown. Ever since Robert Woods suffered a season-ending injury, Kupp has been even more involved in the Rams’ pass-heavy offense. Despite bringing in Odell Beckham Jr. after he was waived by the Cleveland Browns, Kupp is still seeing a massive target share. Matthew Stafford has incredible chemistry with his go-to target, who is one of the best route runners in the league. Kupp also led the league in YAC (yards after catch) with 848 on the season. Although many consider him to be more of a possession receiver, when Stafford hits him in stride, Kupp has the ability to turn a small 10-yard slant into a 50-yard touchdown.

When the Cardinals and Rams have played this season, they have combined for 110 points in two meetings. So expect another high-scoring affair in this one. If that’s the case, Stafford will continue to target Kupp at a very high rate given he is Los Angeles’ most trustworthy receiver. Kupp produced at least 100 receiving yards in 11-of-17 contests this season. Smash the Over.

Despite missing a month of the season, Kittle finished with 71 receptions for 910 yards and five touchdowns. The Dallas Cowboys allow the 13th-most receiving yards to opposing tight ends this season (54.1 per game) and they haven’t played many tight ends of Kittle’s caliber this season. Although Kittle finished the season on a bite of a down note, it’s hard to envision Kyle Shannahan not getting the talented tight end heavily involved in this win-or-go-home game. Yes, San Francisco is going to attempt to run it down Dallas’ throats but the Cowboys have a high octane offense and the 49ers will have to throw the ball to keep up with Dak Prescott, who is coming off a five-touchdown game in the regular-season finale. Kittle averaged 65 receiving yards per game in his 14 outings this season. He should have no problem breaking 50 yards in what is expected to be a physical and high-scoring affair.

Fournette is currently listed as a game-time decision after missing the last three games of the season with a hamstring injury. If he can suit up, Bruce Arians will try to keep his workhorse healthy for the Divisional Round. The Bucs should have no problem defeating the Eagles without the services of Fournette, and Ke'Shawn Vaughn has proven to be more than capable of moving the chains in Fournette's absence. Expect the Bucs to limit Lenny's touches, especially. if this game becomes a blowout as many pundits are expecting. The Under is the smart play given Fournette is not 100% healthy and the high likelihood of a double-digit lead heading into the fourth quarter.

Yes, the Kansas City Chiefs throw the ball almost as much as any team in the NFL but they are playing a very mediocre Pittsburgh Steelers squad that snuck into the postseason. The Chiefs are the biggest favorite of the week and they should have a significant lead heading into the fourth quarter. Although Kansas City likes to keep Darrel Williams involved, Williams is much more valuable as a pass-catcher. When the Chiefs inevitably attempt to run out the clock, it will be CEH who does most of the damage. The Steelers allowed the second-most rushing yards per game (120.6) to opposing running backs this season. Given the expected game script, Edwards-Helaire should get plenty of opportunities to run with the rock. He also has big-play ability and can easily burst out of the hole for a 30- or 40-yard gain on one play alone. After missing the final two weeks of the season, CEH should be fresh so long as he can suit up. The second-year back is considered questionable for the Chiefs’ Wild Card matchup with the Steelers. However, if he can go, I anticipate 65+ rushing yards and a touchdown in an easy victory. Bettors will want to monitor this situation. If CEH isn’t cleared to play, obviously skip wagering on this prop. And if the Chiefs say they will limit his touches, you may want to rethink this one. That said, if he is a full-go, smash the Over on this prop.

Update: It looks like Edwards-Helaire will not suit up for the Chiefs on Wild Card weekend due to a nagging shoulder injury. Make sure you pass on this prop, as Williams is expected to serve as Kansas City's starting running back.