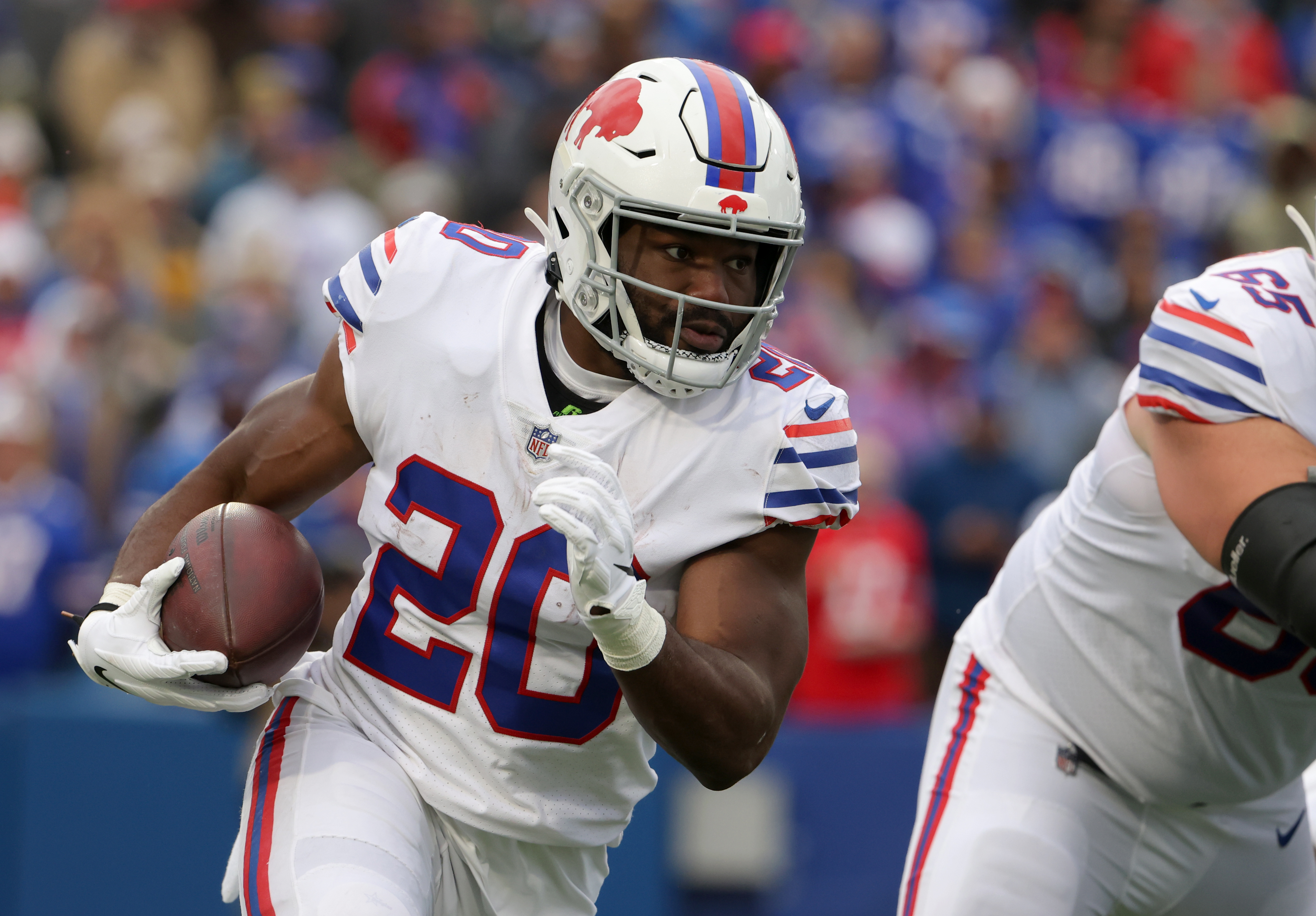 In the spirit of giving back for Thanksgiving, we are providing our unique Predictive Analytics articles for FREE in Week 12! You can view our Predictive Adds article and now, we will take a look at the players fantasy owners are dropping at the highest rate heading into Week 12. With just three weeks left in the fantasy football regular season, it is not only critical to identify the top statistical producers on the waiver wire, but it is also important to drop the player who has the least value moving forward.

With two of the best offenses on bye in Week 12 (the Kansas City Chiefs and Arizona Cardinals), this could be a very difficult week. Plus, there are plenty of injuries to keep an eye on, as well as COVID-19-related illnesses. It’s not just players who are injured who you need to monitor, but also players who recently returned from Injured Reserve such as Miles Sanders and Clyde Edwards-Helaire. Their respective returns put massive dents in the value of players such as Jordan Howard, Boston Scott, and Darrell Williams. Superstar Saquon Barkley’s return for the Giants completely killed Devontae Booker’s value as well. It’s important to always look to improve your roster, especially so close to the fantasy postseason. Cutting underperforming players is simply a necessary evil. But to help you drop the right players, we will break down the players that real fantasy owners are giving up on heading into Week 12.

Predictive Analytics in a nutshell is a game-changer for fantasy players. No one else in the industry offers these types of insights. You will now be able to analyze the most important fantasy metrics of the current week BEFORE waivers are processed.

Keep reading here to access our Predictive Drops or log into your account, and utilize the Fantasy Assistant. From there, you can see all Predictive Analytics, featuring adds, drops, trades, and FAAB.

Now, who are the players fantasy owners are giving up on heading into Week 12?

With Elijah Mitchell sidelined for Week 12, Wilson got the start at the running back position for the 49ers in Week 11. Despite seeing 20 touches, Wilson managed just 58 total yards and failed to find the end zone against a generous Jacksonville Jaguars defense. Fantasy owners are frustrated with the lack of production in what appeared to be a juicy matchup. However, with Mitchell’s availability still in question for San Francisco’s Week 12 matchup with the Minnesota Vikings, I think fantasy owners are overreacting to one poor performance. It’s important to note that Jimmy Garoppolo missed Wilson on a wide-open touchdown pass when he sailed the ball over Wilson’s head at the end of the 49ers’ first drive. And although the box score signals a backfield timeshare between Wilson and rookie Trey Sermon, six of Sermon’s 10 carries came after the 49ers were up 27-3. Had the game been closer, Wilson may have seen closer to 25 carries. It’s very difficult to find running backs who can accumulate 20 touches on the waiver wire. Most running backs still available don’t see more than 10 carries per game. Wilson is the workhorse back in Kyle Shanahan’s offense when Mitchell is injured and fantasy owners shouldn’t drop Wilson in case Mitchell suffers a setback or goes down again once he returns.

No defense was added more than the Dolphins heading into a Week 11 matchup with the dismal New York Jets. After sacking Tyrod Taylor five times and forcing four turnovers against the Houston Texans in Week 9, the Dolphins were even better in Week 10 against Lamar Jackson and the Baltimore Ravens. Miami allowed just 10 points, produced four sacks, forced two turnovers, and Xavien Howard returned a Sammy Watkins fumble for a 49-yard touchdown. However, the Dolphins failed to live up to expectations against an offense led by Joe Flacco in Week 11. They were decent but not nearly as explosive as they had been in their previous two contests. Miami allowed 393 yards, and only sacked Flacco twice while failing to force an interception. They did recover two fumbles, but it was a largely underwhelming performance. In Week 12, the Dolphins face a Panthers offense that has improved dramatically since the return of Cam Newton. Fantasy owners are doing the right thing by cutting bait with Miami. There are plenty of streamable defenses available on most league’s waiver wires.

Henry had been averaging a touchdown per game over his last seven games heading into a Thursday Night Football meeting with the Atlanta Falcons in Week 11. He was coming off his best performance of the season in which he caught all four of the targets thrown his way for 37 yards and two touchdowns. However, Henry’s reception and yardage totals have been nothing to write home about this season. And against the Falcons, he was largely disappointing, managing just two catches for 25 yards. Through 11 games, Henry has caught 33 balls for 378 yards and scored seven touchdowns. He is completely touchdown-dependent as he has topped 50 yards once all season. With Jonnu Smith back in the lineup and Mac Jones getting more comfortable with the rest of his receivers, it’s hard to envision Henry having much value down the stretch. Plus, the Patriots still have a Week 14 bye looming. In Week 12, the Patriots face a Titans secondary that has been stingy against tight ends. Tennessee is allowing the fifth-fewest fantasy points per game to tight ends this season. It’s safe to cut Henry from your roster and add someone more reliable and consistent.

Ingram has been awesome since returning to the Saints. New Orleans didn’t know he would play such a pivotal role in the offense until Alvin Kamara went down with an injury. In two starts since Kamara went down, Ingram has accumulated 135 rushing yards on 30 carries, 10 receptions for 86 yards, and one rushing touchdown. Nothing to complain about there. However, Ingram is now dealing with a knee injury of his own and is questionable for the Saints’ Thanksgiving day matchup with the Buffalo Bills. I’m guessing fantasy owners are dropping Ingram because they believe Kamara will return in Week 12, but that is not definitive yet. Kamara has been dealing with an MCL sprain and may not be able to suit up in time for Thursday’s game. Even if Kamara returns, Ingram is one of the best handcuffs to own in all of fantasy football right now. He has averaged 15 carries and five receptions with Kamara inactive and topped 100 total yards in both contests. Fantasy owners should hold onto Ingram, no matter what Kamara’s status is for this week.

Moss put together his worst outing of the season in Buffalo’s Week 11 loss to the Colts, finishing with just five rushing yards on three carries. He failed to haul in the one ball thrown his way. Moss was decent during the early portion of the season but has regressed slowly and steadily as the season has progressed. He has just 81 rushing yards and one touchdown in his last five games while chipping in with 10 receptions for an additional 72 scoreless receiving yards. However, he doesn’t have a single reception in his last two games and has seen his snap percentage decrease as Sean McDermott has gotten Matt Breida more involved in the offense. Breida is the one who scored two touchdowns against the Jets in Week 10, and he also managed 51 rushing yards on just five carries in Week 11. Considering Buffalo now has a three-headed monster in the backfield featuring Moss, Breida, and Devin Singletary, it’s awfully hard to imagine how Moss can provide value down the stretch of the season. Fantasy owners are making the right decision by dropping him ahead of Week 12.

Arnold has been on a roll heading into Week 11 after catching five passes for 67 yards and a two-point conversion for 13.7 PPR points. He had exceeded 60 receiving yards in three straight contests and had 17 receptions over that span. However, Arnold saw zero targets in Jacksonville’s Week 11 loss to the 49ers. Fantasy owners are overreacting big time after Arnold’s goose egg. The Jaguars just lost wide receiver Jamal Agnew for the rest of the season, which means Arnold should see an increased role in this offense moving forward. The Jags face a weak Atlanta Falcons secondary in Week 12 and Arnold will have a bounce-back performance, Don’t drop him after one poor performance. Mike Gesicki has had TWO goose eggs this season, but you don’t see fantasy owners dropping him. Arnold will be just fine.

In the absence of Derrick Henry, the Titans have tried out many players in the backfield. It looked like Foreman, Peterson, and Jeremy McNichols were going to make up a three-person running back by committee. However, Dontrell Hilliard was Tennessee’s most effective running back in the Titans’ surprising Week 11 loss to the Houston Texans. Hilliard rushed for 35 yards on seven carries and caught eight passes for an additional 47 receiving yards. Meanwhile, Foreman was held to 25 rushing yards on seven carries and one catch for 15 yards while AP turned nine carries into 40 yards and caught two passes for four yards. There are just too many players in Tennessee’s backfield to trust any of them moving forward. Neither Foreman nor Peterson can be trusted heading down the stretch of the fantasy season, especially with the Titans’ bye week looming in Week 13.