Let’s take a look at some names to lock into your lineup, as well as a few to stay away from as we prepare for our Week 7 fantasy football matchups. Don’t forget to set your lineups ahead of tonight’s Thursday Night Football matchup between the Cleveland Browns and the Denver Broncos (although I probably won’t have much exposure to that game considering Baker Mayfield, Nick Chubb, and Kareem Hunt have all been ruled out). And with that, let’s dive into the locks of the week at each position, as well as a few players fantasy owners should keep on their bench in Week 7. 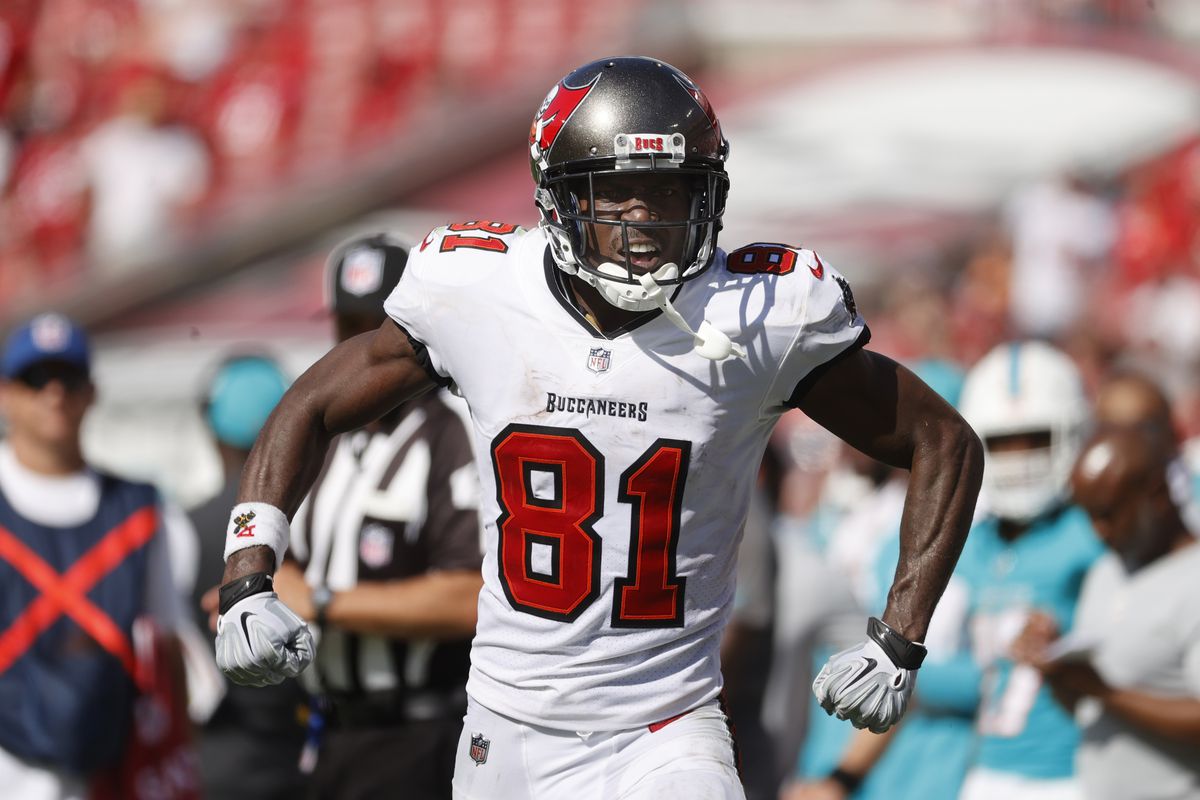 “I own you,” Rodgers said to Bears fans after scoring the game-sealing touchdown in Week 6. Rodgers made it clear he’s always owned Chicago, and he’s going to own the Washington Football Team in Week 7. Washington’s defense was expected to be awesome with superstar defensive lineman Chase Young, but the team has severely underperformed. Although Rodgers didn’t need a big day to put Chicago away, he came out of that contest with a passer rating of 128 in Week 6. Washington is coming off a game in which they allowed Patrick Mahomes to post his highest passing yardage total of the season with 397 yards. The WFT sits atop the rankings of most fantasy points allowed per game to opposing quarterbacks. Rodgers is going to dominate this contest. Look for him to eclipse 300 yards and score three touchdowns (two passing and one rushing). Bonus: Davante Adams is going to produce 150 yards and a touchdown as well.

Tagovailoa performed admirably in his first game back from a Week 2 injury. He threw for 329 yards, two touchdowns and one pick. However, the Dolphins ended the Jaguars’ 10-game losing streak, so you know the Dolphins are motivated heading into a Week 7 matchup with the Atlanta Falcons. The second-year quarterback in Miami is going to shred a Falcons secondary that may have slow feet coming off a bye week. Don’t be surprised if Tua surpasses 300 yards once again and records multiple scores. Atlanta has allowed the fourth-most rushing yards to opposing quarterbacks this season. There is a chance that Tagovailoa will use his legs for the first time this season.

Check out our Start / Sit tool to see which players to start. Here, you can see that Tua is the right quarterback to start over Justin Fields!

The rookie out of Alabama was fairly efficient in the Patriots’ first meeting with the Jets, completing 22 of 30 passes. However, he didn’t really do much else. New England’s defense absolutely manhandled Zach Wilson, forcing four interceptions, so Jones wasn’t asked to throw any deep balls. New England ran the ball quite a bit against a defense that is allowing the fifth-most fantasy points per game to opposing running backs. This is a Damien Harris and Rhamondre Stevenson type of week. Jones likely will be serviceable in SuperFlex leagues, but I would stay away from him in single quarterback formats. He will probably throw for about 200 yards and perhaps one touchdown, not good enough for your starting quarterback.

Cam Akers owners were devastated when he suffered a season-ending injury prior to the season starting. However, coach Sean McVay wasn’t too disappointed because he knew he had Henderson ready to take over. Henderson dominated in Week 6 against the G-Men, producing 78 rushing yards on 21 carries to go along with both a score on the ground and in the air. After facing the lowly Giants, the Rams get a cupcake of a matchup against the winless Detroit Lions. Detroit is allowing 4.3 yards per carry and the team is playing hard but they simply don’t have the talent on the defensive side of the ball to stop Matthew Stafford, Cooper Kupp, Robert Woods, DeSean Jackson, Van Jefferson, Tyler Higbee, and of course Henderson. This is also a revenge game for Stafford after he was traded from Detroit for Jared Goff. Clearly, the Rams got the better end of the deal. Regardless, the Rams should get out to a commanding early lead, which means Henderson is going to see tons of touches. Expect 20+ carries for 100+ yards and at least one touchdown.

Starting running back Antonio Gibson is banged up with a shin and ankle injury and it’s very possible that he is unable to suit up for Washington’s matchup with the Green Bay Packers. Even if he is able to go, he’s not going to see a full workload. McKissic saw a season-high workload against the Chiefs last week, tallying 45 rushing yards on eight carries while tacking on an additional 65 yards through the air. He caught eight of his 10 targets from Taylor Heinicke. Clearly, Heinicke trusts his security blanket out of the backfield. McKissic is one of the most underrated PPR gems in all of fantasy football. Since the Packers’ offense is so electric, Washington should fall behind early, which means McKissic will be a focal point in Washington’s offense. Green Bay has already allowed five running backs to produce 8+ PPR points in just the passing game (Alvin Kamara, D’Andre Swift, Kyle Juszcyk, Najee Harris, and Samaje Perine). If Gibson sits out, McKissic is a must-start option. Even if Gibson is able to suit up, McKissic is a solid flex option.

I’m sorry Gaskin owners, but this kid is just too volatile to trust even against the Falcons. Atlanta’s secondary is atrocious, which means Tua is going to try to throw the ball down field quite often. Gaskin might get some dump offs, which helps in PPR leagues, but I would be shocked if he found the end zone. The usage is simply not there. He now has three games in a row in which he has failed to record more than five carries. The Dolphins don’t use Gaskin in the running game, which is why he belongs on your bench.

It’s a good thing that Tom Brady demanded that the Bucaneers go out and sign former Pittsburgh Steeler superstar Antonio Brown. Despite the plethora of weapons at Brady’s disposal (Chris Godwin, Mike Evans, and Rob Gronkowski just to name a few), Brown seems to be Brady’s favorite target. Over the last three contests, Browns has seen a whopping 33 targets. The fewest targets he has seen over that span is seven. He also has 280 receiving yards and three touchdowns over those three games, so Brown is really starting to click with the GOAT. Chicago’s defense ranks in the bottom third of the league when it comes to allowing production from opposing wideouts. Brown is going to build off of his three-game success and strengthen the bond he has with Brady. I’m predicting eight receptions for 90 yards and two touchdowns. Lock it in!

I know, I know… It’s hard to recommend starting any member of the Giants after their abysmal 1-5 start to the season. However, all of their skill players are injured, which leaves Shepard as the only guy that Daniel Jones can pepper with targets. Although Darius Slayton may return, Kenny Golladay and Kadarius Toney are expected to remain sidelined. Jones has leaned on Shepard all season, as the wideout has recorded at least seven catches on nine targets for 76 yards in the three full games that he has played in 2021. He has yet to fail to produce at least 17 PPR points. Not to mention, the Carolina Panthers’ defense had allowed seven receivers to eclipse 14 points. Start Shepard at your WR3 or flex spot in Week 7.

Boyd has seen his targets dip over the past few weeks, collecting just eight over the last two games. Ja’Marr Chase is the real deal and appears to be solidifying himself as Joe Burrow’s favorite target, and understandably so given their history. In Week 7, the Bengals wideouts will face a Ravens defense that is one of the stingiest in allowing receptions to wide receivers with 66 on the season. It could be a tough day for the entire pass-catching corps, but Boyd seems to be falling a bit on the depth chart, which doesn’t help his chances to produce fantasy points in Week 7. Plus, Tee Higgins is back, which means Boyd is probably third in the pecking order. Don’t expect Boyd to produce double-digit fantasy points in Week 7.

Things are looking good for the starting tight end in Philly. Zach Ertz was traded last week, which frees up tons of snaps and opportunities for Goedert, plus it looks like Goedert will be cleared from the COVID-19 restricted list in time to suit up for Week 7’s matchup against the Las Vegas Raiders. Vegas has allowed four touchdowns to tight ends in their last three outings. With Jalen Hurts balling, Goedert is headed for a breakout second half of the season with Ertz gone. He should see a massive spike in targets considering the Eagles’ lack of receiving weapons outside of DeVonta Smith.

Ertz was finally shipped out of Philly to the Cardinals. The new Cardinals’ tight end couldn’t ask for a better matchup than the worst team in the league at defending the position in fantasy, the Houston Texans! Don’t forget that Mo Alie-Cox tallied a touchdown against them in Week 6, so Ertz figures to have a solid debut for his new team. Maxx Williams may be somewhat involved, but probably more as a blocker. Ertz is going to be the receiving tight end. Although Kyler Murray loves to spread the ball around, something tells me that it will be tough for him to pass on Ertz when Arizona reaches the red zone, which they do quite a bit.

Tonyan has only found the end zone once through six weeks after scoring 11 times in 2020. He scored 14 points when he scored his touchdown against the Lions in Week 2. In his other five outings, Tonyan has a combined NINE fantasy points. That is absolutely abysmal. Washington has a terrible defense this year, however, they have only allowed one touchdown to opposing tight ends, which was Dawson Knox in Week 3. Washington was able to keep Kyle Pitts and Travis Kelce out of the end zone. So how the heck is Tonyan going to score? Not only do I recommend sitting Tonyan, I actually think he is droppable at this point of the season.

The Saints’ defense enters Week 7 with a +5 turnover differential that includes nine interceptions. They haven’t been getting a ton of pressure on opposing quarterbacks though, averaging just 1.6 sacks per game. Seahawks quarterbacks have been sacked 18 times this season, good for fourth-most in the league, so New Orleans could produce a few more than usual. It also helps that Geno Smith is starting in place for the injured Russell Wilson. If you can get the Saints, don’t hesitate to plug them into your lineup.

In a game that Vegas has at 56 total points, Bullock figures to be busy in Week 7. Anytime Kansas City is involved, it’s going to be a fast-paced game. The veteran has hit on 11 of 13 field-goal attempts, and 14 of 15 extra points. There’s plenty of potential for Bullock to be a difference-maker in seasonal leagues this week.