If you added someone off the waiver wire last week, you probably did well in your matchup this week. Khalil Herbert, Darrel Williams, Alex Collins, Devontae Booker, Rhamondre Stevenson and even Donovan Peoples-Jones all performed quite well. Clearly, scrounging the waiver wire can be quite beneficial. With six teams on a bye (BUF, LAC, DAL, JAC, PIT, and MIN), you may be desperate for a gun slinger in Week 7. MVP candidate Josh Allen, along with Dak Prescott and Justin Herbert, plus Trevor Lawrence, Kirk Cousins and Big Ben are all out this week. So let’s take a look at the top replacements heading into Week 7. 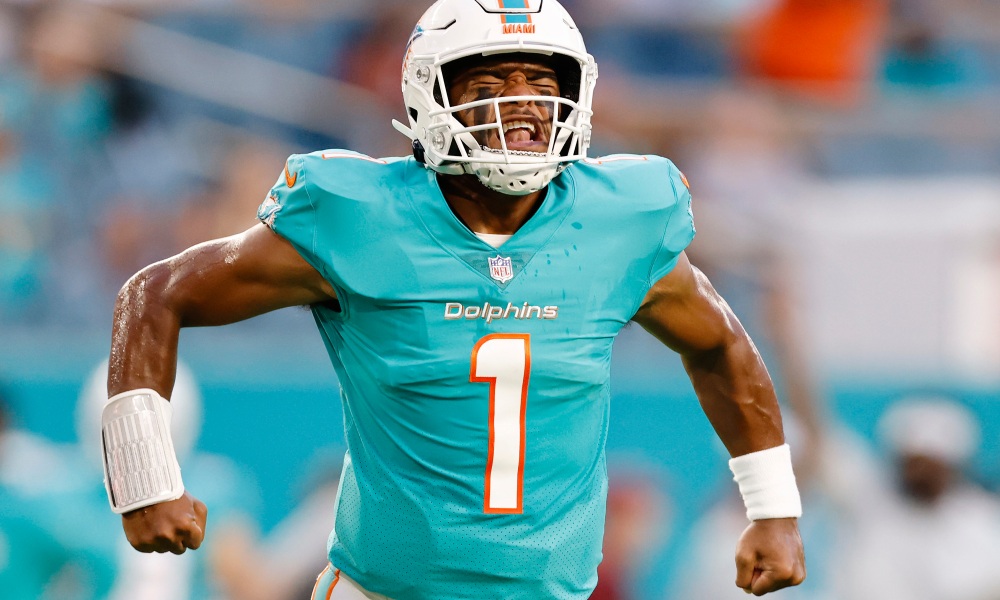 Tua returned from a three-week absence to take over for Jacoby Brissett on Sunday. In his first game back, Tagovailoa performed quite well in London. Although he had a fairly favorable matchup against the Jaguars, Tua threw for 329 yards and two touchdowns (both to rookie Jaylen Waddle). The Dolphins will continue to be without top wideouts DeVante Parker and Will Fuller, however, Waddle has performed quite well and tight end Mike Gesicki is a great security blanket. Tagovailoa doesn’t like to throw the deep ball, but he is fairly accurate in the short passing game. Plus, Myles Gaskin is a great pass catcher out of the backfield. Miami gets a cupcake matchup at home against a struggling Atlanta Falcons secondary. Not to mention, he gets the Texans in Week 9 and two easy matchups against the Jets late in the season. You can certainly do worse than Tua, and he is available in about 85% of leagues.

It’s a bit risky to add Mayfield considering he is dealing with a shoulder injury and will be without the services of Jarvis Landry. Mayfield is just the 24th ranked quarterback in 2021 but he is averaging a decent 18.76 fantasy points per game in four-point passing touchdown leagues. Mayfield gets a top-10 Denver Broncos passing defense in a short week on Thursday Night Football. However, Odell Beckham Jr. seems to be coming to life (he had a season-high reception and yardage total in Week 6) and the Browns’ running attack is not healthy so Mayfield will be asked to shoulder a heavier load. Look for him to target Beckham and Donovan Peoples-Jones quite often on Thursday.

The rookie was incredibly efficient against the Dallas Cowboys in yesterday’s heartbreaking overtime loss. The former Alabama quarterback threw for 229 yards and two touchdowns. He could have had an even bigger day if a touchdown late in the first half to Jakobi Meyers was not called back due to a holding penalty. The Patriots get a juicy matchup against a soft Jets team in Week 7.