Welcome to Week 5! It's time to look at the top wide receivers to add heading into Week 5.

I hope you are still undefeated after using FantasySP’s Predictive analytics. To access this tool, log into your account, and utilize the Fantasy Assistant. From there, you can see the predictive analytics for adds, drops, trades, and FAAB. 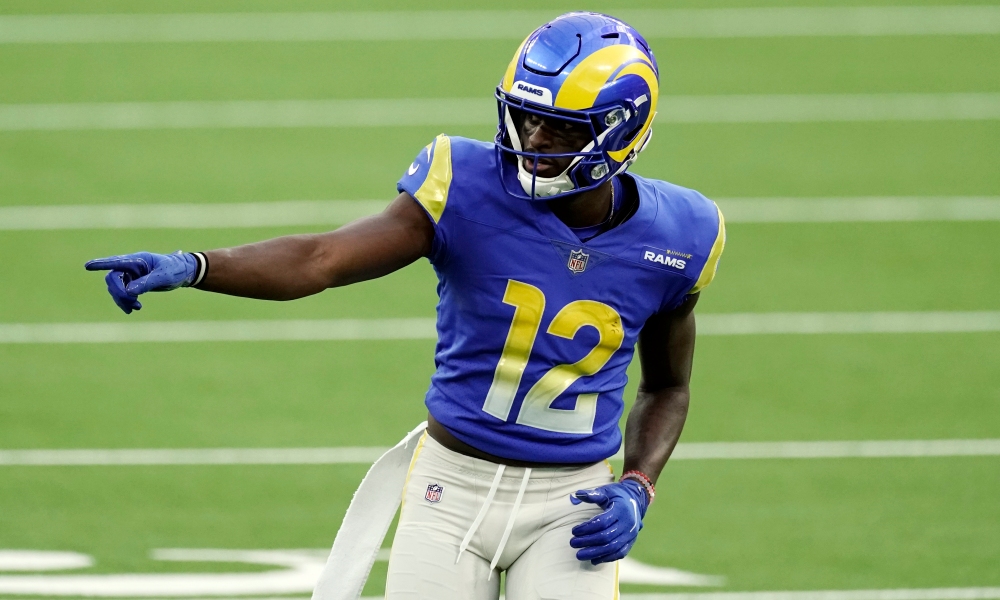 There’s been a lot of talk about Cooper Kupp vs. Robert Woods in the fantasy community. But I think the discussion should be more about Van Jefferson vs. Robert Woods. While Kupp has cemented himself as Matthew Stafford’s favorite receiving option, Jefferson is positioning himself to be the 2B to Woods’ 2A. There are more than enough balls to go around for the Rams, which makes Jefferson a smart add right now. At a minimum, he’s what everyone wanted Josh Reynolds to be. At best, he’s the new Robert Woods. If you are going to break the bank for any receiver, the second-year Ram might have the most upside at the position after scoring multiple touchdowns through the first quarter of the season.

Mooney probably isn’t available in the majority of leagues, however, I know he is still there in a few. If Mooney happens to be on the waiver wire in your league, scoop him up immediately. He seems to finally be developing chemistry with rookie quarterback Justin Fields and eclipsed 100 yards in Week 4. Justin Fields loves throwing him the ball and he has excellent separation downfield. Allen Robinson has been subpar and Mooney is making a case to be Chicago’s WR1 moving forward.

Why is Jamison Crowder underrated every single season? While Corey Davis, Elijah Moore and Keelan Cole still exist, Crowder has been the favorite security blanket for pretty much every quarterback he’s ever played with -- and Zach Wilson seems to be no exception to that as he threw the ball to Crowder nine times in the veteran’s season debut. He’s available pretty much everywhere and is definitely worthy of a speculative add.

Green is looking like the perennial Pro Bowl wide receiver with Kyler Murray at the helm. Green has seen six targets in every game he’s played this season and has found the end zone twice in four games. While there are a lot of mouths to feed in Arizona, Murray has been doing a good job of spreading the balls around and should continue to target Green at a similar pace. Green is also an excellent red-zone threat and should see tons of targets in the endzone for this electrifying Cardinals offense.

Raymond had an awesome performance on Sunday, catching two touchdown passes, however, don’t go breaking the bank for him just quite yet. Yes, Raymond is a decent pass catcher. That said, he’s done the majority of his work in garbage time. The Lions are going to try to run the ball as much as possible with D’Andre Swift and Jamaal Williams so I wouldn’t expect more than four to five touchdowns the rest of the season from Raymond. Plus, Raymond is never going to pass T.J. Hockenson as Jared Goff’s favorite target.

Pascal is being underutilized in fantasy leagues. It seems like he makes a big play game after game, yet he is owned in almost no leagues. Pascal should continue to be peppered with targets for as long as T.Y. Hilton remains sidelined (and he may still remain valuable even after Hilton’s return). Pascal is a solid WR4/WR5 in PPR formats.

In his limited playing time this season, the first-round rookie has really impressed me. However, there are still some deep concerns about his playing time once Sterling Shepard and Darius Slayton return to action. Still, if you have room on your roster, Toney could be a nice addition due to his ability to make the big plays.