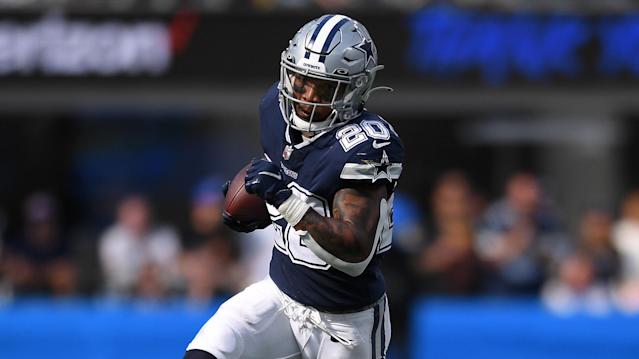 So with that, let’s take a look at the top running backs to target this week on the waiver wire.

Pollard should not be on your league’s waiver wire. If he is for some reason, go grab him right now, especially if you are an Ezekiel Elliott owner. Regardless, Pollard has some flex appeal after eclipsing 100 yards rushing on just 13 carries. Plus, he has caught all seven targets through two weeks of action. Pollard is the real deal and if anything happens to Zeke, Pollard has the ability to be an RB1 in fantasy.

Patterson has out-produced starting running back Mike Davis against all odds. After Week 1, I thought Patterson would only be used in certain game plans. It has become quite clear that Patterson has carved out a nice role for himself after finding the end zone through the air and on the ground in Week 2. Patterson’s versatility gives Arthur Smith more looks on the offensive side of the ball. Expect Patterson to remain heavily involved in Atlanta’s offense.

I told you he would be involved last week and he played very well in the Ravens’ come-from-behind win over the Chiefs. Murray will serve as Baltimore’s goal-line back and split carries with Ty’Son Williams.

McKissic must be added in all PPR leagues, especially after Antonio Gibson’s surprisingly sluggish start. McKissic is Washington's third-down receiving back and is practically a wide receiver. He’s got legit speed and excellent hands. He’s worthy of flex consideration depending on the matchup.

Carter has 88 all-purpose yards against a very stingy Patriots defense. He is the running back of the future in New York. He may not have a ton of huge weeks, but he could be a difference-maker late in the season. Add him now before it’s too late.

Obviously, I like Carter’s upside a lot, however, the Jets still use Ty Johnson a lot out of the backfield and on obvious passing down situations. Since the Jets will be trailing in just about every single game they play, Johnson has some PPR appeal.