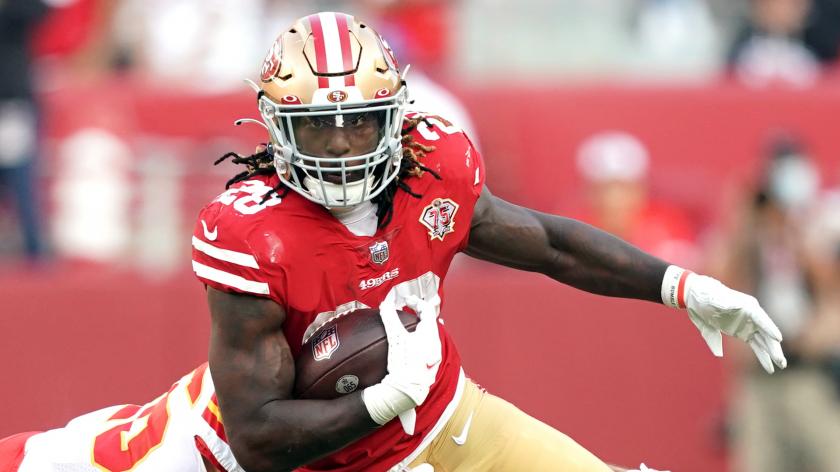 It’s hard to call a guy who just carried the ball 26 times a streaming option, but Ingram doesn’t scream fantasy starter at this point in his career. While I’m fully prepared for a dud after last week’s huge game, the Texans will again lean on their running game against the Browns this week. If you’re in desperate need of a streamer to fill in for Mostert (or otherwise), Ingram should be near the top of your list.

Another week on the list for Drake. He’s very much the RB2 in Las Vegas, but he’s also very much the passing back and has a floor of at least 7-8 points in PPR leagues. With five receptions for 59 yards last week, Drake exceeded that floor and showed why the Raiders paid him in the offseason. Josh Jacobs is still the main guy in Vegas, but Drake is a solid streamer if you are thin at the position.

Everyone is going to be on the Elijah Mitchell train this week. From what I’ve read, Sermon was only inactive last week because he doesn’t play on special teams and Mitchell does. There is no doubt in my mind that Sermon suits up for his NFL debut in Week 2. I would not be shocked if he was San Francisco’s starting running back either. San Francisco spent more draft capital on Sermon than Mitchell and Sermon is clearly the superior back. Time will tell if Sermon’s game translates to the NFL level, but I don’t see any reason why it wouldn’t. The 49ers will continue to be a run-first offense with Jimmy Garoppolo under center, which obviously bodes well for both Sermon and Mitchell. Both could easily exceed double-digit fantasy points.

Cordarrelle Patterson? Really? Most thought this electric kick returner retired. And almost nobody knew that he was a member of the Falcons’ rejuvinated backfield along with Mike Davis. Patterson somehow seems to have found a second wind to his career as a running back and looked better than Davis at times last week. Patterson is much quicker and will be used to get around the edges whereas Davis is more of an in-between-the-tackles runner. I wouldn’t feel great starting Patterson this week, but things are bleak out there once you get past the top 25 or 30 running backs in the fantasy realm.