Week 1 did not disappoint unless you’re a Packers fan. Hold off on the panic drop clicks before you move into Week 2. There are better days ahead for many skill position players who let us down this past weekend. It is important to focus on the fact that we’re finally seeing the chips fall in terms of target spread, volume and seeing what these new rookie quarterbacks have in the tank. Let's look at Week 2's stock watch! Use FantasySP’s Trade Values Chart and their Trade Analyzer to make the best possible deals to improve your squad! 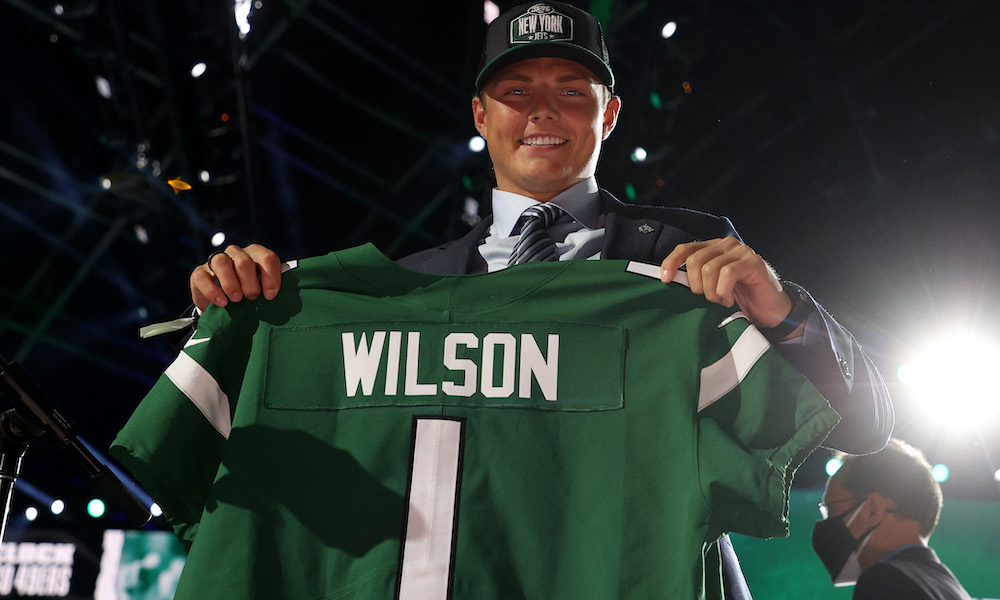 Darnold looked silky smooth against his former team in his Carolina Panthers debut. He was able to spread the ball healthily to his receivers and even managed to run in a touchdown himself. The second half was a little slower for him, but the team pulled out the win. I’m encouraged by what I saw him put together; Fantasy managers in Superflex leagues should absolutely roster Darnold. The Panthers are hosting the Saints at home this week, which will be a tough matchup, however, the following two weeks Darnold has very favorable matchups that would put him in line for streaming potential.

Jimmy Garoppolo put together a good first week with over 300 passing yards and a TD. Though Lance was brought in as an option, and threw his first TD of his NFL career, as long as Garoppolo keeps putting up this type of yardage, he will limit Lance’s season-long potential. I didn’t expect Jimmy to completely flop Week 1, even though he did fumble his first snap of the game. Unlike the clear QB mess the Bears are dealing with in Dalton, Garoppolo looked steady. As long as the ship stays the course, Lance is nothing more than a bench hold in Dynasty formats.

Wilson had a rough start but I believe in 2-QB formats, he holds value for fantasy managers. He’s going to have the volume as the Jets work out the kinks on defense, keeping Wilson in a steady shoot-out mode. Once he perfects his timing with his receiving weapons, you’ll be glad you held on to him.

Raheem Mostert is now out for the entire season. What a blow to that Niners offense. Carries will be shared between the rookie tandem of Trey Sermon and Elijah Mitchell moving forward. In Kyle Shanahan’s running game, we know he likes to utilize multiple backs. So while Trey Sermon was a healthy scratch this week, we know he’ll be in next week. This doesn’t mean Mitchell will lose value. I believe there’s enough rushing opportunity to support both backs. So if you’re in need of a running back, I believe he’s your guy.

I’m extremely discouraged by Robinson’s usage this weekend. Given Robinson’s success last year and Travis Etienne being out for the season, we had every right to expect a healthy volume for Robinson. However, Carlos Hyde ended up with more rushing attempts than Robinson in a matchup that should not have been that troubling for backs. Looks like Urban Meyer’s favoritism of Hyde might be something to look out for, and perhaps you should consider shopping interest on Robinson.

Fantasy owners need to calm down; we’re far from the panic stage with Najee Harris. Admittedly, his Week 1 showing was a little underwhelming... However, the Bills’ defense is no joke! The Steelers have a very tough schedule ahead but fantasy managers should be encouraged by his usage. Harris was on the field for 100% of the team’s snaps. An insanely high volume for a rookie back, but what that tells us is Pittsburgh is committed to getting Harris involved and improving their running game. The volume is there, so don’t give up yet!

Finally, Mike Williams looks healthy, nimble and like the red-zone threat we’ve wanted him to be since his rookie campaign. He had 8 receptions on his 12 targets and could have had more were it not for a couple of drops. But the good news is the red-zone targets are there. He capitalized with a TD and has the makings of the consistent deep threat that Justin Herbert needs him to be. Stock up now while the price is low.

Kyle Shanahan clearly sent us all in a rage when Aiyuk was a ghost this Sunday. Reporter Matt Maiocco tweeted that Aiyuk is “still learning to be a pro,” is a major cause for concern. Where there’s smoke there’s usually fire, and those rostering a receiver who was slated to be the WR1 of the group should be worried.

Callaway struggled because he was shadowed by Jaire Alexander almost all day. Brighter days ahead and you have to be excited by the volume Jameis Winston is putting up to support that opportunity.

The veteran tight end hasn’t missed a beat in his production with his new team. Cook is clearly the top option at the position and you love the steady 8 targets he saw in Week 1. One completion in the end zone would have really tipped the scales in his favor. However, with Herbert under center, it’s only a matter of time before that happens. It could happen this next week against a weak Dallas secondary.

Watching Matt Ryan struggle was painful enough for us, but his receiving unit is watching their opportunities dwindle. I see Hayden Hurst’s targets on the chopping block going forward. The Falcons are looking to make Kyle Pitts a bigger fixture; he had twice as many targets as Hurst. However, some owners might think Pitts might not be ready for the NFL yet. Capitalize on those owners and trade Hurst while you still can. Eventually, he will be nothing more than a waiver wire pickup.

There should be a blanket statement for all Packers. Not sure what the problem for Aaron Rodgers and his offense was but no one was on the same page. The Packers will bounce back, and when they do, don’t let Tonyan slip away. He had 11 TDs last season and was a favorite red-zone target of Rodgers. Better days are ahead and what better bounce back than their next matchup against the Lions.