Finding a sleeper tight end could be the difference between winning and losing your fantasy football league. Since the top three tight ends (Travis Kelce, Darren Waller and George Kittle) are exponentially better than the rest, which tight ends are worth targeting late on draft day? Let’s dive in. 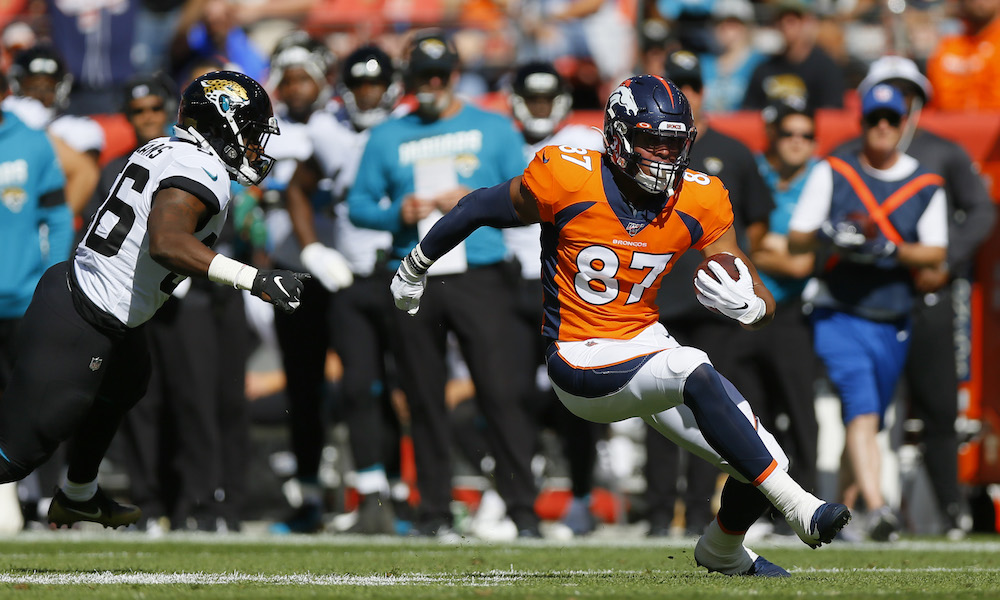 In 15 games in 2020, Noah Fant finished sixth among tight ends in targets and receiving yards and seventh in receptions despite a noteworthy lack of consistency and quality at the quarterback position. Fantasy owners may shy away because he scored just three touchdowns for a subpar offense. One way or another, however, Denver is likely to have a little more stability under center and reach the red zone more often. Fant has drawn some offseason raves, and attending the first session of Tight End University (run by George Kittle, Travis Kelce and Greg Olsen) can’t hurt. Offensive coordinator Pat Shurmur’s past units have regularly featured the tight end. The pieces are in place for the 2019 first-rounder to become a legit TE1.

After Adam Thielen and Justin Jefferson, the receiver room in Minnesota is composed of young players and no-name journeymen. Irv Smith Jr. has a great opportunity to stand out and proclaim his spot as Krik Cousins’ third option in the passing game. At age 23, Smith is coming off of a 2020 season in which he found the end zone five times while competing for playing time with veteran Kyle Rudolph. With no more Rudolph nostalgia weighing him down, Smith Jr. will have a decent amount of volume coming his way this season. The latest reports out of training camp are saying that Smith has solidified himself as one of Cousins’ favorite red-zone targets. That should bode well for fantasy owners.

We all remember it. The beautiful stretch at the end of the 2019 season when the Rams started running more 12-personnel and Tyler Higbee amassed 522 yards and two touchdowns over five games. This vaulted Higbee onto seemingly everyone’s breakout list heading into the 2020 season, where he, unfortunately, did not have a single game north of the century mark and only found the end zone five times in total. Gerald Everett had a lot to do with that being the case as the two tight ends almost perfectly split the workload, rendering both nearly useless in the fantasy game. Everett has now departed for Seattle, leaving Higbee with those touches all to himself and with considerable upside this season. Expect the Rams’ passing game to excel under Matt Stafford and for Higbee to return considerable value when compared to his current ADP.

Everett has seen 50+ targets a year for the last three seasons with the Los Angeles Rams. He’s averaged 37 receptions for 382 yards and two touchdowns per season during that span.

Everett gets a fresh start where his only competition at the tight end position is Will Dissly. Dissly has yet to record a 30-target season in his first three years in the NFL. Dissly’s 12 starts in 2020 are one more than the 11 that Everett’s seen in his career.

Everett is the top receiving tight end on the Seahawks’ roster and he will have a career year in his first season with Russell Wilson throwing him the ball. Expect 45+ receptions, 500+ yards and four touchdowns. Everett makes sense as a solid backup tight end on your fantasy football roster.