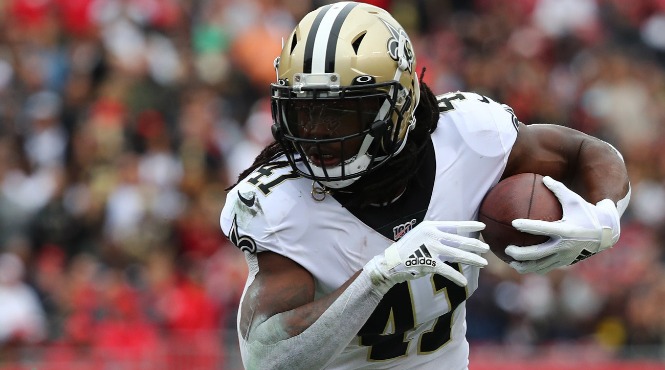 This is Alvin Kamara's game to shine and I have him winding up as the RB1 for the entire weekend as a little icing on the cake and that really should not come as any shock as there’s plenty here going in his favor.

First off, he’s drawing the match-up that I/we have been hammering for the past month plus and that is go after the Panthers rush defense when they are on the ROAD and as you saw last week they were able to limit a terrible backup RB in Brian Hill at home. They won’t have that luck this week against the Saints combo of AK41 and Latavius Murray and in the case of Kamara we saw the rust from his injury lay-off break last week as he averaged nearly 5 YPC against a very good Tampa rush defense and was the Saints #1 receiving target — which is really why I went heavier on him as Sunday drew closer last week.

The only thing missing were the touchdowns and he had one called back due to a Jared Cook hold, so there’s zero reason to be concerned with him not getting red zone touches at all as he has proven over the years to be an elite red zone threat. Kamara has not scored a touchdown since week three against Seattle when he found the end-zone multiple times. That streak ends this week and to cap it off he’s getting a CBS game with Jim Nantz and Tony Romo. What you say??? Why does that matter!?!?! Well, it just doesn’t, but in 7 career CBS games Kamara has 10 touchdowns including 7 in the last 3 on CBS — all of which were done by everyone’s friend Jim Nantz and favorite Corona hotline master Tony Romo. So yeah, you want random narratives in the AMBUSH? We just gave you one.

AK41 is going to score twice, catch plenty balls and be the star RB in this game.

AMBUSH PLAY #1: The touchdown gods will shine on Alvin. He scores twice and leads the way for the Saints offense.