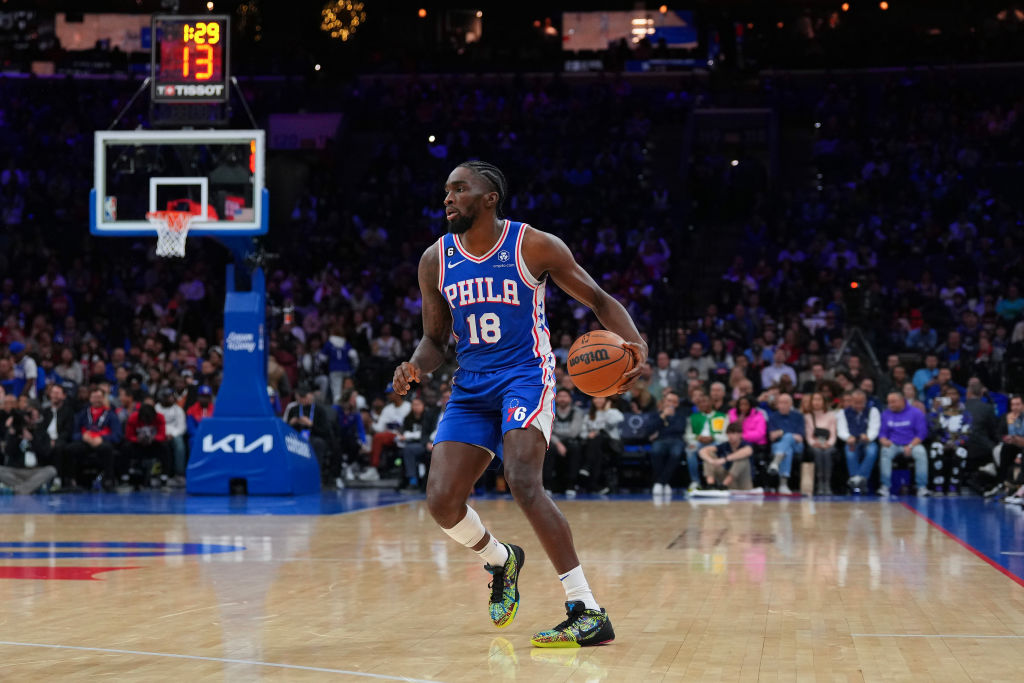 Injuries to players on the Philadelphia 76ers and the Detroit Pistons make PG Shake Milton and C Jalen Duren two of the most interesting fantasy basketball waiver-wire pickups heading into Week 7 (Nov. 28 - Dec. 4).

Let’s take a look at the best fantasy basketball free agents to pick up right now.

James Harden is still expected to miss a few more weeks for the 76ers. The issue for Philadelphia now is that they will also be without Tyrese Maxey for at least three-to-four weeks. As a result, Shake Milton is the team’s best available point guard and he will be getting big minutes at least until Harden returns to the lineup. In his last two games, Milton played 30+ minutes in each contest and scored in double-figures on 50+% shooting from the field. On Nov. 19, Milton played 38 minutes and produced 27 points (10-15 FG), six rebounds, and two assists. These are the kind of numbers he is capable of and now that he will be seeing big minutes for the 76ers, he could potentially be the most valuable free agent guard in fantasy basketball heading into Week 7. At the moment, he remains available in approximately 50% of fantasy basketball leagues. With three games on the schedule in Week 7, Milton is a must-start in fantasy basketball until Harden returns to the lineup.

Austin Reaves continues to improve and impress. He’s provided the Lakers with another wing who can shoot the deep ball. Reaves has scored in double figures in six of the Lakers’ last seven games. He’s produced at least 15 points in four of the last five contests. This season, he is scoring 9.9 PPG converting 51.6% of his shots from the field, 3.2 rebounds, and 2.1 assists per game. While he isn’t the sexiest shooting guard on the market, he’s available from waivers in more than 75% of leagues.

Anytime that Ja Morant is out, Tyus Jones’ fantasy value rises exponentially. At the moment, both Ja and Desmond Bane are sidelined for the Grizzlies. This has given Jones an uptick in minutes and production over the last few games. In three of the last five games, Jones scored in double figures (at least 13 points) and produced at least five assists in each contest. For the time being, Tyus Jones’ fantasy value is up. At the moment, fantasy owners can claim him from waivers in more than 40% of leagues. Jones may not be a steady source of rebounds or defensive stats but he’s a great source of assists and points while Morant is sidelined.

In each of Brooklyn’s last four games, Yuta Wantanabe has scored in double-figures and shot at least 50% from the field. Over the last two games, he’s combined for 36 points (11-16 FG), 10 rebounds, and five assists. In Watanabe, the Brooklyn Nets have found some versatility. Watanabe is a fantastic shooter. This season, he’s shooting 60.9% from the field and 57.1% from downtown. Though he’s averaged 18.2 minutes per game so far this season, I would not be surprised if the Nets gave him more playing time. He deserves to be on the floor at least 25 minutes in each contest. Watanabe has the potential to make a significant splash as the season progresses. He’s worthy of a speculative add to your roster.

Grant Williams emerged as a crucial role player in last year’s playoffs. This season, he’s producing career-high’s all around. He’s averaged 29 minutes per contest in 16 games played this season. Right now, Williams is averaging 10.2 points (57.6 FG%), 4.9 rebounds, and 1.6 assists per game. In five of the last six games, Williams converted at least 50% of his shots from the field to score a minimum of 12 points. Williams is posting career-highs all around and is playing particularly well through this most recent stretch. He’s available from waivers in approximately 60% of leagues at the moment.

This season, Jalen Duren is averaging 21.9 minutes for 7.1 points, 7.5 rebounds, and 1.1 blocks per game. He’s posting near double-doubles night-in and night-out. Duren is a young big who is emerging as a solid option for the Pistons. This will especially be the case through the end of November and December as C Isaiah Stewart will be sidelined due to injury. As a result of Stewart’s injury, expect Duren to take over and to produce above average numbers specifically over the next few weeks.

Andre Drummond is playing a little more than 15 minutes per game this season off of the bench for the Chicago Bulls. To give you an idea of how efficient he is on the floor, consider his game last night: Drummond played just 13 minutes but still produced five points, 12 rebounds, and one assist. Despite averaging just 16.1 minutes per game this season, Drummond is averaging a near double-double with 8.1 points and 9.9 rebounds per game. It would be great to see his share of minutes increase. Even if they do not, Drummond’s efficiency as a big man on the floor is pretty impressive. His size allows him to box out almost anyone and get rebounds. Especially since the Chicago Bulls play four games in Week 7, Drummond could be a really interesting big to pick up from waivers despite how few minutes he’s gotten per game this season. If you need rebounds and blocks and are willing to take the poor free throw percentage, Drummond makes a ton of sense in Week 7.